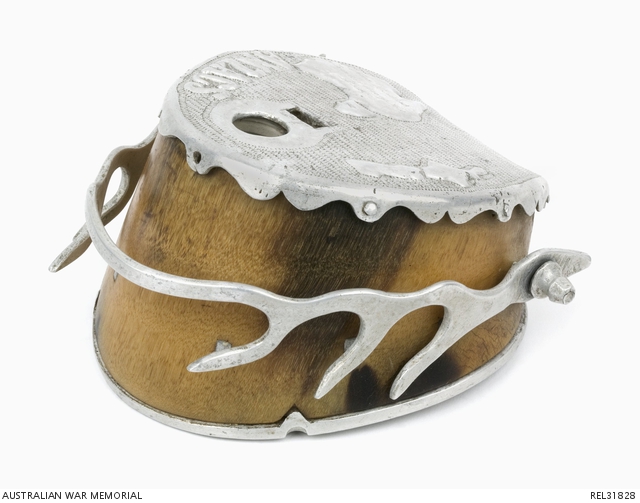 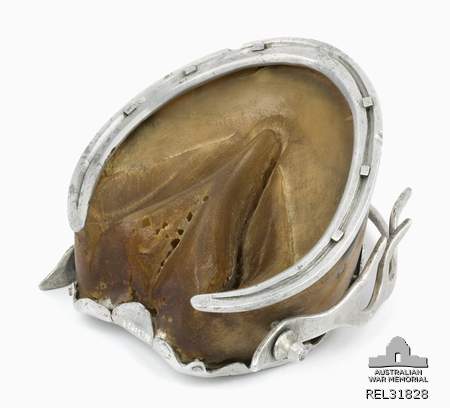 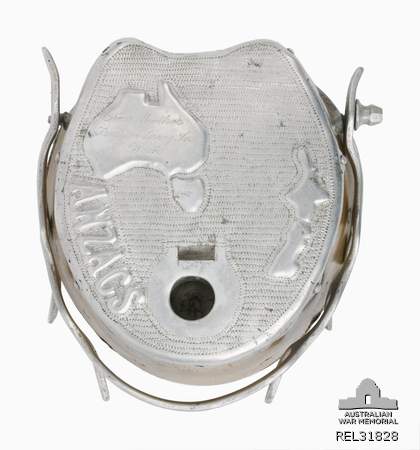 Horse's rear hoof mounted as a souvenir inkwell. The hoof is fitted with a light aluminium racing plate, attached with six nails. The nails pass through the wall of the hoof, where they have been cut off and polished smooth. The top has been fitted with an embossed and engraved aluminium plate, which features the raised word 'ANZACS' and rough silhouettes of Australia and New Zealand. The words 'Dear Mother from her loving Son Dick' are engraved in cursive script within the Australian continent. Cut into the plate towards the front of the hoof is a circular hole containing a clear glass ink well. Above this is a rectangular slot which would have formed the base for a hinged cap over the well. A swivelling aluminium frame, curved to follow the shape of the hoof, is attached to pins at the back of the hoof. The frame has three branch-like arms on each side, designed as a rests for pens, and folds flat when not in use.

This souvenir was sent by 1741 Trooper Richard England ('Dick') Davis, of the 2nd Remount Unit, AIF, to his mother in Newtown, Sydney. Dick Davis was a 22 year old drover when he enlisted in the Australian Imperial Force in November 1915. Because of his knowledge of horses, he was selected to form part of 2 Australian Remount Unit, which was then being raised to care for the horses of Australian light horse regiments which were engaged as infantry units in the fighting on Gallipoli. As the need for their original role had passed, the Remount units were later absorbed into the larger Imperial remount service in Egypt, which was tasked with the breaking-in and care of new horses awaiting allocation to units in the Middle East. As a member of 6 Squadron, he sailed from Sydney on HMAT A67 'Orsova', on 10 November 1915, one of his officers being the well known poet and journalist Lieutenant A B 'Banjo' Paterson. Davis served in the Middle East throughout the remainder of the war, and returned to Australia in August 1919 aboard HMT 'Burma' as part of No 2 Troop, 'B' Squadron, Australian Remounts. As examples of very similar handmade souvenirs are known to have been owned by other members of the Australian Remounts, it is probable that they were all produced by a single individual within the unit.