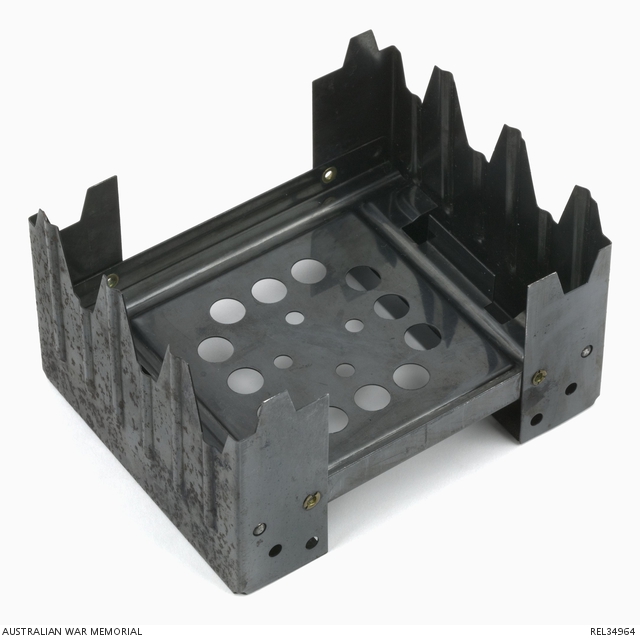 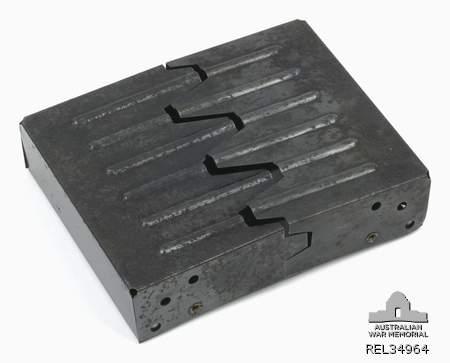 Black coloured aluminium hexamine stove. The stove is made of three parts, the floor and the two sides, which form a box when closed. The floor of the stove has a series of holes stamped into it. This allows the remains of the hexamine tablet to fall away after burning. The sides of the stove open to form the stand at the bottom and the cooking platform on top. The top of each side has been stamped so that when the stove is closed, the sides become interlocking. The sides of the stove have been attached to the base with brass rivets.

Associated with the active service of 2788438 Private Richard Joseph Barry. Barry was born on 16 March 1947 in Sydney, NSW and was called up for National Service on 13 September 1967. He was appointed to 6 RAR's Anti-Tank Platoon, Support Company and trained as a visual tracker rifleman. However as the Viet Cong did not have tanks it was decided that the unit would adopt their secondary role as combat trackers using dogs. The three dogs the platoon used in Vietnam were: Marcus, Milo and Trajan. 6 RAR embarked aboard HMAS Sydney for Vietnam on 8 May 1969; part of 6 RAR's second tour of duty. On 19 May, the unit arrived at Nui Dat and was renamed 6 RAR/NZ (ANZAC) Battalion to reflect the inclusion of two Royal New Zealand Infantry Regiment rifle companies, two sections of mortars and two assault pioneer sections. The unit's Anti-Tank Platoon was placed under the command of D Company and worked within the Company mainly as a fourth rifle platoon. Barry's first operation was Operation Laverack, which commenced on 30 May 1969. It was a reconnaissance in force in the area to the north of Nui Dat and astride Provincial Route 2. It was designed to deny the Viet Cong the free use of the major communications routes between the west of Phuoc Tuy Province and the staging and base areas to the north east. For the first two weeks in June all 6 RAR/NZ companies carried out continuous ambushing in their Areas of Operation. As of 16 June Barry's platoon had one contact with one Viet Cong killed with no casualties in the platoon. On 22 June the platoon moved further north from their original patrol and joined up with V Company (a New Zealand Unit) just north of the North Vietnamese refugee village of Xa Binh Gia. Their main jobs were patrolling, searching enemy villages, ambushing and following up enemy trenches with the dogs. On 30 June they were extracted by air and returned to Nui Dat. Barry's platoon participated in their second operation, Operation Mundingburra from 14 July 1969, however on 10 July Barry suffered minor burns to his face, arms and left hand. He had been asked to sweep up the rubber tree foliage and other debris that had accumulated around the tent lines at Nui Dat and light a bonfire. However Barry had been given a petrol can containing aviation fuel instead of ordinary petrol and the subsequent explosion caused Barry's injuries. After a week convalescence Barry re-joined his platoon at Fire Support Base Thrust. The platoon had been called upon to train South Vietnamese troops in the methods of jungle warfare. The platoon went on night ambushes every night split into teams with approximately nine or ten South Vietnamese troops. Operation Mundingburra finished on 15 August. Barry as a part of the Anti Tank platoon had been travelling with A Company searching bunkers and enemy caches for the final three days. They travelled all the time in the mangrove swamps mostly waist high. On 18 August 6 RAR/NZ, erected a stone cross at the Long Tan battle site and conducted a service to remember those of the battalion who had died there. This was Barry's last venture into the bush. From 20 August the 10th National Serviceman's Intake were recalled to begin their anti-malarial course and to start cleaning and handing in their gear. Medical exams and blood tests were held to get their International Health Cards up to date. Barry flew to Sydney via Saigon on 3 September arriving in Australia on the morning on 4 September. Barry was formally discharged on 3 October 1969 having completed the prescribed period of two years continuous full-time service in the Regular Army Supplement.