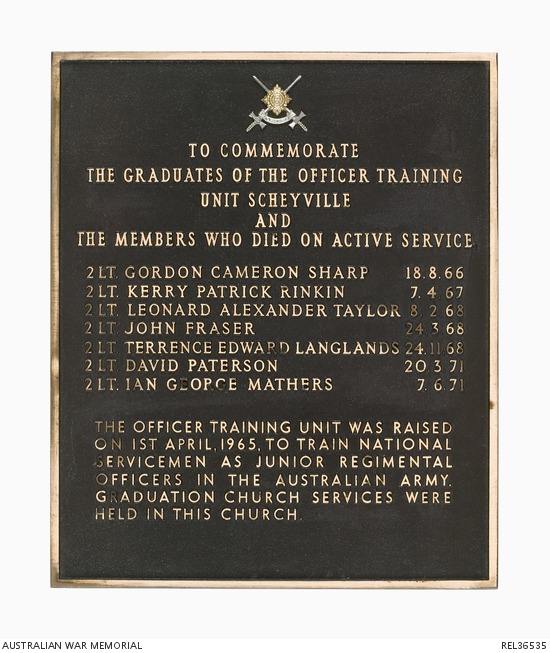 The plaque carries the names of the seven Officer Training Unit graduates who died in Vietnam:

2nd Lieutenant Gordon Cameron Sharp
On 18 August 1966 Sharp was in command of 11 Platoon, D Company, 6RAR at the commencement of the Battle of Long Tan. 11 Platoon came under heavy fire at around the same time that monsoon rains began to fall, reducing visibility to around 50 metres. Calls were made for artillery support at 4:26 pm. Minutes later Sharp was killed by a single bullet.

2nd Lieutenant Kerry Patrick Rinkin
On 7 April 1967 Rinkin was in command of 4 Platoon, B Company, 5RAR, when he tripped a landmine near the barrier minefield in the Phuoc Loi area of Phuoc Tuy Province. He was evacuated to Vung Tau, but died of his wounds.

2nd Lieutenant Leonard Alexander Taylor
On 8 February 1968 during Operation Tet-Ba Ria/ Long Dien, B Company 3RAR were attempting to clear Viet Cong from the town of Long Dien. 5 Platoon, under Taylor's command, came under fire from the front and from both sides, and Taylor together with the platoon signaller sustained gunshot wounds and were killed.

2nd Lieutenant John Fraser
On 24 March 1968 during Operation Pinnaroo, 3RAR were attempting to clear the Hon Vung feature in the Long Hai Hills. Fraser was in command of 9 Platoon, C Company, and tripped a jumping mine near a cave entrance. Hearing the mine arm, Fraser deliberately put both feet on the mine to prevent it from jumping and called to others not to try and rescue him. Fraser died as a result of the subsequent blast.

2nd Lieutenant Terrance Edward Langlands
On 24 November 1968 during Operation Capital II in the northern part of Phuoc Tuy Province, A Company, 1RAR were advancing on a Viet Cong encampment which consisted of around 30 bunkers. Langlands was in command of 1 Platoon, which became pinned down by defensive fire from the camp. While another platoon was moving to assist them, Langlands and Corporal F J Annesley were killed by gunfire and another member of Langlands' platoon was wounded.

2nd Lieutenant David Paterson
Paterson died on 20 March 1971 during Operation Briar Patch, which was conducted by 3RAR in a remote area of Phuoc Tuy province east northeast of the Task Force base at Nui Dat. 8 Platoon, C Company, under Paterson's command, was advancing toward a group of enemy bunkers, and was engaged at very close range. Paterson was struck immediately and died of his wounds.

2nd Lieutenant Ian George Mathers
On 7 June 1971 Mathers was a Forward Observer operating with B Company 3RAR during Operation Overlord in Long Khanh Province near the Courtenay rubber plantation. Following a sustained artillery bombardment the previous day, Australian forces were advancing toward an enemy bunker complex when they came under fire. Mathers died after sustaining multiple gunshot wounds.