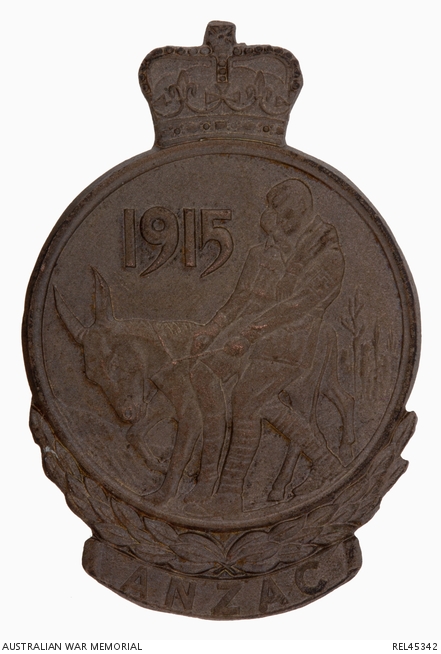 Anzac Medallion lapel badge, a circular bronze badge surmounted by the Queen's crown; design shows Simpson and his donkey assisting a wounded man, a laurel wreath, the date '1915' and the word 'ANZAC'. Reverse is hand engraved 'A. G WILLIAMSON'; a button mount in brass is soldered to the reverse.

Anzac medallion lapel badge commemorating the 50th anniversary of the Gallipoli Campaign. It is associated with the service of1393 Lance Corporal Adam Gordon Williamson, born at Mount Gambier, South Australia (SA). An unmarried cook, Williamson enlisted on 15 December 1914 at Oaklands, SA. Williamson's father, also called Adam, had served with the South Australian Infantry Regiment as a private (service number 186) and had been awarded the Colonial Auxiliary Forces Long Service Medal on 30 January 1906 and was a well-known pastoralist in the Mt Gambier district.

The younger Williamson embarked for overseas service on 25 February 1915, aboard the transport Runic from Melbourne. He was assigned to 16 Battalion (4 Brigade) on arrival in Egypt and landed at Gallipoli on 7 May, where he joined them in the aftermath of their assault on Bloody Angle, where they had suffered many casualties. Apart from four days in hospital with neurasthenia and diarrhea (common complaints on the peninsula), he served at Gallipoli until the evacuation. After training in Egypt he was temporarily assigned to 48 Battalion in the reorganisation of the AIF in March 1916, but transferred back to 16 Battalion two weeks later. With 16 Battalion, he embarked for France from Alexandria.

The battalion's first major action on the Western Front was at Pozieres and Mouquet Farm - they moved into the lines on 6 August 1916 and were relieved on 12 August. It was here, on 12 August, that Williamson was wounded by shrapnel on his left thumb. The battalion war diary states that some trenches had ceased to exist owing to heavy artillery fire and that their casualties were severe. As they were being relieved by 50 Battalion around 1.30 pm the enemy heavily shelled their positions, making the relief particularly slow, resulting in 39 killed, 348 wounded and 19 missing. Williamson was evacuated to Northampton War Hospital where he was discharged on 16 October to a convalescent unit at Perham Downs. He was treated for lumbago in March 1917 and returned to France, rejoining his unit on 16 September.

Within ten days, on 26 September, he was wounded again, this time at the Battle of Polygon Wood near Ypres. He received a severe gunshot wound which fractured his left tibia. The war diary noted that only 'very slight' casualties were suffered in the advance, but that they lost a number through snipers and machine gun fire during the time taken to dig in. As a result of this wound, after treatment, Lance Corporal Williamson returned to Australia aboard the hospital ship Karoola, which departed England on 25 November 1917. He was later discharged as medically unfit on 5 July 1918. He arrived home, according to the Friday 12 April 1918 'Border Watch' newspaper, 'on Wednesday evening. ... [he] enlisted in New South Wales and as none of the military authorities were aware that he was returning no official reception was accorded him.'