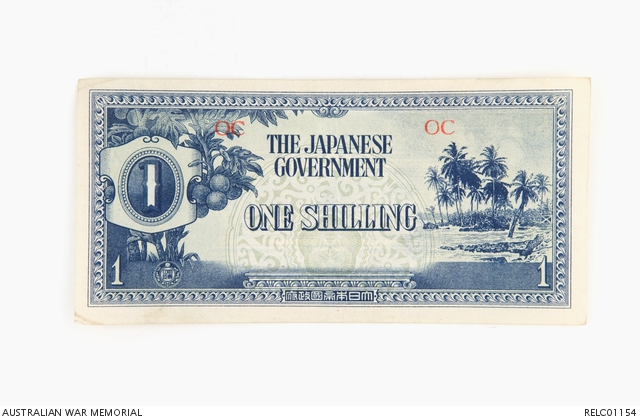 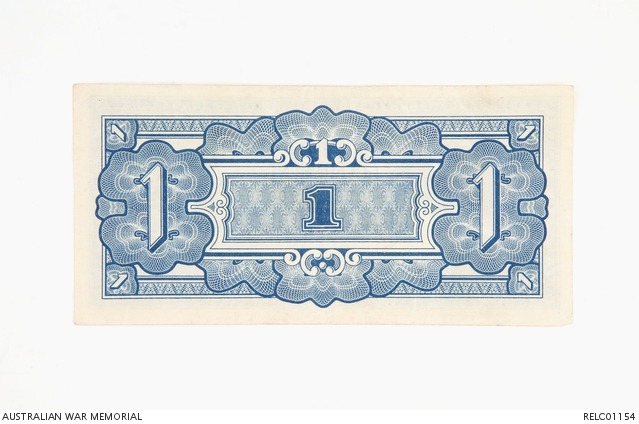 Blue and pale green lithographed banknote of one shilling denomination. The face features a beach scene with palms to the right, with the words "The Japanese Government", the 1 shilling denomination centrally placed, and a breadfruit tree design to the left. A pair of block stamped serial letters (OC), in red, appear at the top of the note. The reverse is printed with a pattern featuring the value. The standard Japanese watermark of a quatrefoil kiri flower is present.

One shilling note associated with the service of SX27241 Corporal Eric Eduard Isaachsen of Brighton, South Australia who enlisted on 24 November 1942. These notes are generally referred to as Japanese Invasion Money (JIM). JIM shilling and pound notes were issued for use in Australian mandated territories throughout British Oceania (principally Gilberts and Solomons, New Britain and Papua New Guinea). The JIM pound was issued utilising the Australian pound as the basic monetary unit, hence the rise in rumours that their production indicated Japan's intention to invade Australia. Generally, the Japanese Government authorised various printings to equate approximately with each occupied country's pre-war currency, and these printings were usually planned and published ahead of the invasions. The philosophy behind the issue was to maintain economic stability within the occupied country; and as part of Japan's stated plan for a "Greater East Asia Co-Prosperity Sphere", to abolish all traces of western influence and establish Japan as the dominant economic influence. Thus, the occupation of Burma saw the issue of cents and rupee JIM; cents/guilder were produced for the Netherlands East Indies, centavos/pesos produced for use in the Philippines and Dollars and Cents for Malaya and Singapore.