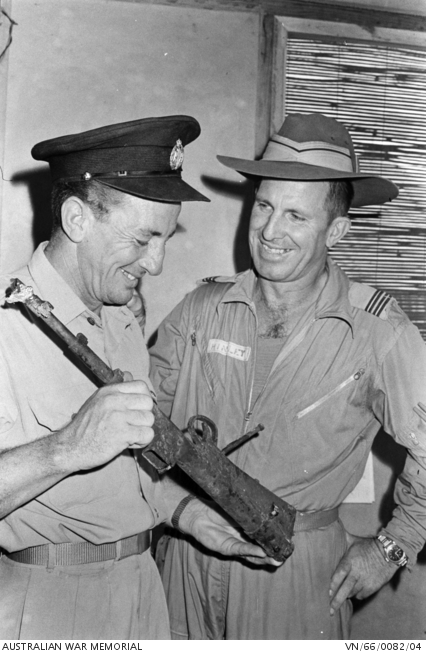 A No 9 Squadron, RAAF, Iroquois helicopter, A2-1018, was on a routine Army co-operation task named Operation Queanbeyan, when it crashed in difficult terrain on Nui Thi Vai Mountain, 12 miles north of Vung Tau, South Vietnam. On impact the Iroquois burst into flames - burning slowly. On board was 200 lbs of TNT and detonators, four crew members and two Army passengers. 21702 Sergeant (Sgt) Gordon D Buttriss, of Sefton, NSW, found himself unhurt after the crash and he quickly helped the two Army men, who both had broken legs, to safety. The only other person remaining in the wreckage was the co-pilot 33192 Flight Lieutenant (Flt Lt) Peter Montague Middleton, Distinguished Flying Cross (DFC), Air Medal (US) of Black Rock, Vic. The Iroquois had come to rest with a two foot tree between Flt Lt Middleton’s knees wedging him to the seat. In spite of the burning aircraft and the danger of the TNT exploding, Sgt Buttriss went to the aid of the co-pilot. Having torn the door of the aircraft off he was unable to move the seat back to free the co-pilot. Australian troops had seen the Iroquois crash and had fought their way through 300 yards of dense jungle to get to the wreckage. Sgt Buttriss and the troops tore away the twisted metal and were able to release Flt Lt Middleton and take him to the shelter of nearby boulders. The wreckage was then engulfed in flames and the fuel tanks exploded, igniting the TNT. Sgt Buttriss was awarded the George Medal (GM) on 16 February 1967 for his efforts. Here Sgt Buttriss (left) and Acting Commanding Officer of No 9 Squadron, RAAF, 23446 Flight Lieutenant (Flt Lt) Leigh Oxley (Laddie) Hindley, of Goulburn, NSW, inspect the remains of Sgt Buttriss’s Owen gun which was dug from the wreckage of the crashed Iroquois.