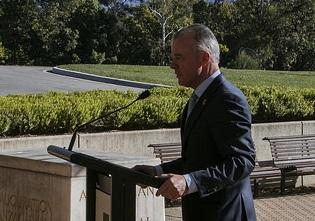 Some of you, who have been to events here before will have heard me say this before, and I will say it again because it is important we never lose sight of it.

This place has its origins in the First World War. At the other end of Anzac Parade, as I pointed out to Senator John McCain when he was here only a couple of days go, I pointed him down Anzac Parade across the lake, described the memorials on the either side of the parade, to the Parliament. And I said to him that is where we exercise our political, economic and religious freedoms.

But in this place is our soul. This is where we honour the men and women, two million of them, who have paid for those freedoms. And I said to him, as I say to others, it’s not the building, or the artefacts or relics we display, but it’s the stories of these men and women.

To understand Australia is to understand this place, in fact it’s not possible to do so until you come here.

Today we are here to dedicate a plaque, and as I said to Special Operations Command in relation to their plaque earlier this week, it might seem a simple, perhaps even a trivial thing that so many people would come here for a plaque.

I get here early in the morning, usually I make my way across the front of the Memorial up to the Administration Building some time just after 7am and I repeat that just after the Last Post Ceremony at the end of the day.

They are repositories of love, of meaning and of memory.

And as many of you know, I suspect not always with joy, for two years of that period I was Australia’s Minister for Defence and I had the privilege in that opportunity to visit the training teams and those of you who were serving in Iraq at the time. And back here, I would be asked frequently what on earth are we doing in Iraq and what’s the plan. Like kids in the back seat of a car, when are we leaving, when are we getting there.

And I would say to them our mission in Iraq is to do what we do everywhere, and that is to train the indigenous forces to the point where they are able to provide for their own security and protect their own people.

It’s easy for our political leaders, as I was at the time, to say these things but you are the men and women who actually did it.

And normal civilians who don’t have much contact with it would say, ‘Oh training? That doesn’t sound too hard.’

And of course that’s a reflection of their ignorance of the circumstances in which you did this training.

Training and logistics, patrols, the use of weapons.

Essentially building an air force from the ground up and all the things associated with that.

It was important as it was complex.

I know I’m going on beyond what should be a welcome to the Australian War Memorial but I can say to Peter Leahy, I went to Tajji and Talil and Camp Smitty and Camp Terendak and al Muthana and that I never forget arriving in one of those places and this young soldier, he must have been no more than 21 or 22, grimy, he’s cleaning his weapon , they’d just come back from a two day patrol and he looked up at me and he said,

And when I was constantly told that Australia had been lucky, lucky, in Afghanistan and Iraq I’d say, yeah we have had a bit of luck, but it’s a lot more than luck, it is four things:

Secondly, it is the training, the depth and the breadth of it.

Thirdly, it is the equipment with which our people are provided.

But there is something else.

It is the Australian character, and it is revealed here.

These young soldiers would see themselves not just as soldiers, but as aid workers, diplomats and teachers.

And unlike perhaps our major ally, instead of turning up somewhere and saying, ‘well, we’re going to make you all like the rest of us’, these young Australians would arrive and they would seek to engage with and respect the culture of those with whom they were working and, in your case, seeking to train.

This is your spiritual home.

It is our privilege to ‘guard the record’ as Charles Bean described it, articulating the vision in 1948:

‘Here is their spirit, in the heart of the land they loved; and here we guard the record which they themselves made.’

This may be just a plaque, but you know better than anybody what actually stands behind it.

The men and women who did it, the sacrifices that were made, not only by you and those with whom you served,  but equally if not more importantly in part the families who loved and supported you through it.