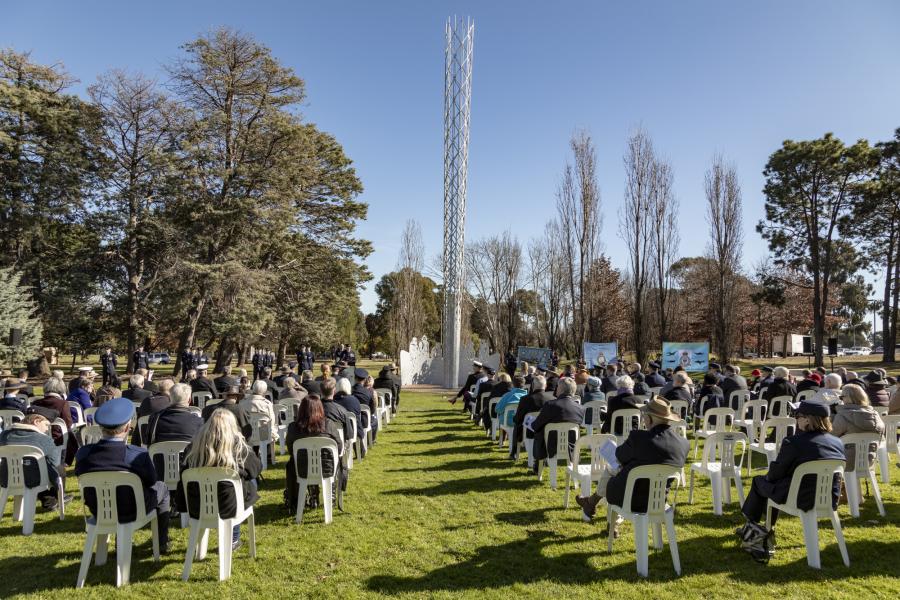 While I’ve only been the Director here for a little over a year, I’ve learned that I’m often more directed than Director! My run sheet says I have two minutes, so I’ll try to be brief.

The first recollection I’d like to offer this morning is that I first came to this spot in the Memorial’s gardens in 2005 for the unveiling of this very monument. I was with my wife, Lou, and two daughters, and we stood just over there.

My confession is that I’d neglected to tell them the thing I was most interested in was the fly past by the RAAF F1-11!

Following the opening on what was a day very much like today – a postcard perfect Canberra winter’s day - and the wonderful singing by the Welsh Rugby Choir, my youngest daughter Kate, completely unscripted,  walked up to a tall and most distinguished looking Bomber Command veteran and said simply’ ‘thank you for being so brave’.

I now believe him to have been Wing Commander Rollo Kingsford-Smith, DSO, DFC, and while I’m paraphrasing only slightly, he basically said to her: ‘Not at all. It was nothing. Anyone could have done it’. That modesty – then and now – is what sets the Bomber Crews apart.

Anyone couldn’t do it!

Of the 10,000 Australians who would eventually serve in Bomber Command, more than 4,000 would be killed.

They were the best. And as I look at our veterans gathered here today, please know this. You were an inspiration, then and now, to all who followed in your footsteps.

My second reflection is a visit to a very different kind of memorial; the Blue Bell Inn in Lincolnshire in the UK. I had the honour to quench my thirst there as part of visit to RAF Conningsby in late 2019, where a young Australian pilot was posted on exchange to an operational RAF unit.

During the Second World War, the Blue Bell was a favoured watering hole of bomber crews, and pennies were left behind to buy the next round after a mission. If the aircrew did not return, the pennies were wedged in the beams above the bar – and they’re still there. Too many of them.

A different, but equally poignant reminder of those bomber crews who did not return.

And my third observation, in this the Centenary of the RAAF, is to acknowledge Air Marshal Mel Hupfeld, and in particular, his wife Lou.

At the Last Post Ceremony every evening we acknowledge the veterans who have served, those still serving, and the families that love and support them. Lou, you should know that I have been to a number of Centenary events this year where members of the RAAF have remarked to me how powerful it is for them to see the role you are playing, on behalf of all families, in supporting the Chief. You deserve special recognition and welcome for all that you do, on behalf of all RAAF families, in supporting our aviators.

And my final point is to update you on G for George!

We are about six weeks into the 12 week process to decant ANZAC Hall and make ready for the development. She has been lovingly disassembled, including by a number of RAAF technicians who have come down to lend a hand, and I’m pleased to report that - unlike my efforts at assembling Ikea furniture , there have been no screws left behind! - and George will shortly make the trip to the Treloar Centre in Mitchell where she will be lovingly reassembled.  In December this year, in the Memorial’s gift to the Centenary of the RAAF, she will again go on display as part of our Big Things in Store Open day. And she will, of course, return to feature in our new galleries.

I thank you for your attendance today, welcome many of you back to the Australian  War Memorial and, again, as we rightly honour our veterans from Bomber Command.

We pay tribute to the example you have, and continue to set for us, of service before self.