Address given by Mr Matt Anderson PSM, Director, Australian War Memorial for the Annual Bomber Command Memorial Service on the 5th of June 2022

It is my honour to welcome you to the Annual Bomber Command Memorial Service.

Last night’s last Post Ceremony, at which many of you were present, honoured the life and loss of Flying Officer Jack Pierce HUTCHINSON, DFC, 626 Squadron RAF Wickenby, who was killed in action on 25 February 1944.

We meet today to honour the promise, made in 2007, at a meeting called by Wing Commander Rollo Kingsford-Smith DSO AM DFC (Retd) at his home at Exeter in the NSW Highlands.

Rollo was concerned that the Australian public were forgetting we had lost more than 4,000 Australian Aircrew in the Second World War during their service with Bomber Command and, as was his way, in a rich life well lived,  he was determined that action was taken.

The result was to hold this annual Bomber Command Commemorative Day to remember and pay tribute all who served in Bomber Command.

Today, we also remember the men and women of the ground crews that serviced the aircraft, loaded the guns and bomb bays, fed the crews, transported them or worked in Flying Control.

And, of course, the families and, indeed entire communities, that loved and supported them.

We gather today to ensure there is no national amnesia where our Bomber Command veterans are concerned.

While much was said about Fighter Command, and the Battle of Britain, I was surprised when, as part of my research for this welcome, I read Churchill’s ‘The few’ speech of 20 August 1940:

Never in the field of human history has so much been owed by so many to so few. All hearts go out to the fighter pilots whose brilliant actions we see with our own eyes day after day, but – and this is an important but! - we must never forget that all the time, night after night, month after month, our bomber squadrons travel far into Germany, find their targets in the darkness by the highest navigational skill, aim their attacks, often under the heaviest fire, often with serious loss, with deliberate careful discrimination, and inflict shattering blows upon the whole of the technical and war-making structure of the Nazi power.4

It is right that we gather near the Bomber Command Memorial in Canberra, for, as Hank Nelson wrote, long before this Memorial was commissioned:

“For those who wish to commemorate Bomber Command in public or private there (was) no obvious site.

The battles were fought through hundreds of miles of sky; and of the old airfields, Waddington is still an operating station and closed to the public, and many others are disappearing under fields and housing and industrial estates.

The two memorials that record the names of over one thousand Australian air men (with no known grave), the books in Lincoln Cathedral, and the cloisters of the Runnymede Memorial are little known.

Those aircrew whose bodies were recovered are scattered through many small British and Continental graveyards – nine in Sweden, seven in Switzerland, and one in Lyon in France.

So we gather here, in the heart of the nation they loved.

We remember those who died as a direct consequence of enemy action, and the more than 650 who died in training.

with 8 tonnes of petrol around you,

trying to get airborne in an aircraft that had been built as quickly as possible,

from a runway that has been made as small as possible

and in weather that the day dished up, was just the start.“

In April I had the honour to travel to RAF Waddington, where I can assure you the contribution made by the RAAF remains front of mind.

At the RAF Heritage Centre at Waddington - which during the war was the NAAFI and was bombed in the early hours of 9th May 1941, by a lone German intruder causing serious damage. Unfortunately, one of the bombs hit a slit trench outside the club where 11 personnel were sheltering - they were all killed.

The victims included seven of the girls who worked in the NAAFI: one of them was the manageress of the club, Constance Raven. The NAAFI was soon rebuilt, and was called the "Raven's Club " in her honour.

But in that Heritage Centre today, they honour the RAAF squadrons who operated out of Waddington and, in particular, the crew of Lancaster PD259, RAAF 463 Squadron – whose motto was ’Press on Regardless’.

PD259 took off from RAF Waddington on 31st August 1944 to carry out a night non-operational cross-country flight.

The aircraft crashed at 2315 hours in the mountains about 10 miles north of Kingussie, Inverness Shire, Scotland, and all the crew were killed.

The Royal Australian Air Force crew who died were

Also on board was Glaswegian RAF flight engineer, George Middleton.

The most recent acquisition into our national collection was a recovered flying boot belonging to one of the Australian air crew that I was presented standing next to the fuselage.

My staff had it placed in the Commemorative area at the LPC for Bob Beddows.

It was and will remain a powerful reminder of the loss of those fine young men, but also that one in 5 of our combat deaths during the Second World War were in Bomber Command.

Allow me to conclude, again quoting Churchill when, a month after his ‘few’ address, in September 1940, on the first anniversary of the beginning of the Second World War, Churchill said in a memo to the Cabinet:

“The Navy can lose us the war but only the Air Force can win it….The Fighters are our salvation… but the Bombers alone provide the means of victory.”

And so it proved.

To the remarkable men of Bomber Command here today, and all those who supported them, thank you.

To the Bomber Command families, thank you for keeping their memories and their deeds alive – for as long as we remember, they did not die in vain.

You are all and always most welcome here.

And to their successors, today’s generation of Aviators in the RAAF who, so ably led by the Chief of the Air Force, Air Marshall Mel Hupfeld, we thank you for continuing to honour them through your courage and professionalism.

Through adversity to the stars. 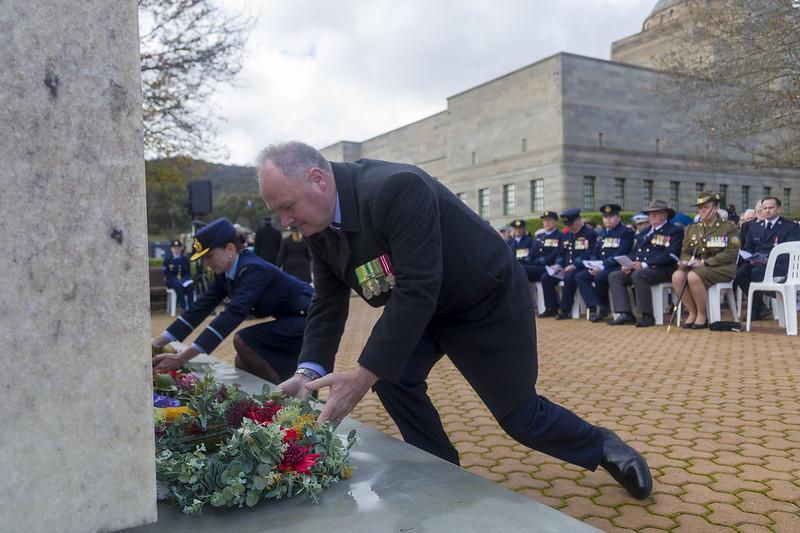