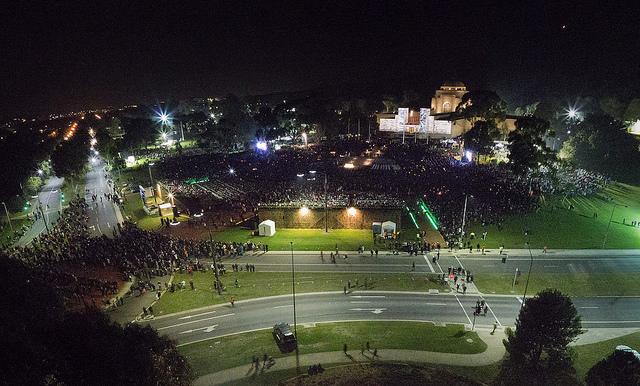 As a small child I remember being rugged up in a parka and mittens and taken to a chilly Dawn Service. It was a service I didn’t understand – a service of silence, half murmured hymns and old men gathered in their own thoughts. And yet somehow those stories of service and sacrifice wound themselves into my DNA.

Like most Australians today, I have no faded photographs of men or women in uniform on my mantelpiece – and I know of no family members who fought on the beaches of Gallipoli, the muddy fields of the Somme or the jungles of South East Asia.

And yet, like all of us, I benefit from what they have done.

And there are also the names of women – women who, from the Boer War onwards, have served with gallantry, have been prisoners of war, and have died wearing the uniform of this nation – from the battlefields of Europe and the Pacific to the desert sands of the Western Sahara.

These women include a group of twenty-two nurses of the Australian Army Nursing Service, evacuated from Singapore. When their ship, the Vyner Brook, was torpedoed in the Bangka Straits, they swam through the night to shore.

There, on Monday the 16th February 1942, shortly after 10 am, they were lined up along the beach, still in their uniforms – the Red Cross sewn onto their left sleeve ­– and at bayonet point were ordered into the sea.

They were under no illusion about their fate. In those last moments before the machine guns opened fire Matron Drummond turned to her nurses with words of comfort and of courage.  And her words speak for a nation … “Chins up girls, I’m proud of you and I love you all.”

Behind every name on every memorial, large and small, across this nation, there is a story of courage.

And for every name there is another story – a story of loss; of family, of friends and of those left behind.

Each one a narrative thread in the fabric of service that underpins our nation. Each a thread extending from the sands of Gallipoli to the servicemen and women of the Royal Australian Navy, Army and Royal Australian Air Force that stand on duty today on operations worldwide.

As I stand here today, my understanding of Anzac Day has also changed.

I have been privileged to wear the uniform of the Australian Army and now, as a veteran myself, I reflect on how very fortunate I am to have come home safely, changed but undamaged by all that I have seen and done.

Today, my thoughts are with those that I have served with – some of whom I knew, and more that I didn't – who now have their names also inscribed in the walls behind me. And I think of the names that have, sadly, yet to be written.

And of those whose names will never be recorded, even though their wounds – not always visible – are carved just as deeply into them, as names into granite.

As a surgeon, I reflect on the cruelty and devastation of which humans are capable – on a century of severed limbs and broken bodies; from the industrial carnage of the Western Front to the indiscriminate weapons of today’s adversaries that target soldiers and civilians alike.

As a mother, I recall with great clarity kissing my own two daughters good-night before I left for Afghanistan, and my heart aches for all those who have farewelled loved ones to war – some to never return; others to return forever changed, haunted by the ghosts of their experience.

But as an Australian, I stand here in awe of what those who went before have given me.

Because every Australian, regardless of whether we have a direct link to those that wore the uniform or not, is a recipient of their sacrifice.

And of their hope that we, who are left to grow old, would live in a country at peace; a prosperous country; a country where we are each free to vote; to choose our own paths through life; to marry whom we please and where we hold the hope that our children will have those same freedoms.

Now I understand that when the bugler sounds the Reveille – the call to awaken – it is not a call to the dead. It is a call to the living.

It calls to each of us – that we might use the threads of their sacrifice to strengthen the fabric of this nation.

That we might live our lives with the same courage, the same loyalty.

That we might be imbued with fairness and compassion for those less fortunate than ourselves.

And set an example for the next generation of children, wrapped up against the cold and dark of the dawn.

And then perhaps, if the so many who sacrificed so much, were to walk amongst us today, they might say: “We too are proud of you.”