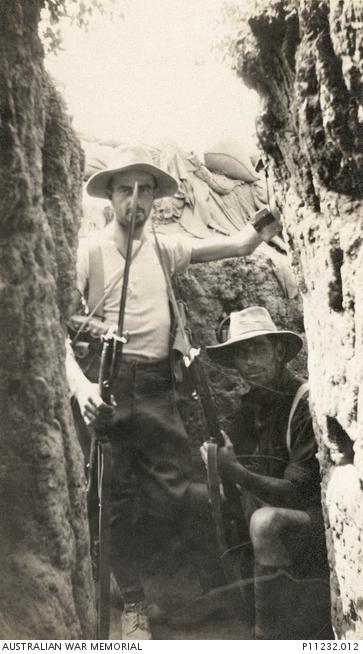 Two men at Lone Pine stare down the trench at the camera, a typical image of Gallipoli, surrounded by earth and sandbags - sods of grass and harsh vegetation reach over them providing a false sense of protection. In a junction, one man standing in trousers, shirt, short sleeves with his webbing slung over the top. His rifle is a leaning stick, a long bayonet attached obscures his face ever so slightly. The other man, on one knee as if in a pose. Shorts, shirt, sleeves rolled up, ready for what may come. His rifle at the high ready, bayonet attached. Both looking extremely ordinary, ready to survive, ready to fight, slouch hats on. We do not know what they did, if they survived, if they died? What adrenaline charged emotions prepared them to face the unknown...and do it again and again and again. We tell our young Australians it is an ANZAC spirit, but perhaps it is more than that.

On that Gallipoli peninsula would be nearly 400,000 casualties in total - 36,141 young Australians and New Zealanders, among thousands of others from Britain, France and the Ottoman Empire. A beach, ridges, gullies and slithers of dirt are forever written into our histories and further still on the Western Front

Battles which shaped an awareness of how we as nations fared in the global scale of warfare - scale measured from the sacrifice of the ‘ordinary’ Australian.

Walter Downing was at Villers-Bretonneux in 1918. ‘The moon sank behind the clouds. There were houses burning in the town, throwing a sinister light on the scene. It was past midnight. Men muttered “Its Anzac Day,” smiling to each other, enlivened by the omen’. Cheering, our men rushed straight to the muzzles of machine-guns, not troubling to take them in the flank. There was no quarter either side… [The Australians] killed and killed. Bayonets passed with ease through grey-clad bodies...

Charlie Stokes was awarded the Distinguished Conduct Medal for his efforts that day. But he was haunted by them too. In later life, he confided in his children he had openly wept after the recapture of Villers-Bretonneux upon seeing what he had done.

Perhaps, it is the capacity of all ordinary humans to do extraordinary things when coupled with extreme circumstance – to fight harder, to march further, dig deeper, move despite overwhelmingly odds and care for wounded mates, no matter what the personal imposition or risk – even if that risk means death. This is spirit worthy of renown, praise and of striving to achieve. This is a human spirit – the Anzac spirit.

A Spirit that spans generations, defines what mateship means and drives us to be more than we ever imagined we could be.

Like Kevin Dasher Wheatley in Vietnam who risked his life to rescue a young girl caught in the cross fire between forces, putting his life on the line for her.

In his last action a fellow Warrant Officer, Ron Swanton was mortally wounded. Dasher refused to leave his side, armed himself with two grenades and stayed with him knowing he would be killed in defending his mate.

That’s courage and mateship. For this he was posthumously awarded the Victoria Cross.

Then there is Keith Payne. Isolated, surrounded on three sides, wounded in the hands and arms and under heavy fire, he covered the withdrawal before organizing his troops into a defensive perimeter. He then spent three hours relentlessly scouring the battlefield for isolated and wounded soldiers, all the while evading enemy troops, who kept up harassing fire. Keith found, organized and rescued some 40 men. Asked if afraid, Payne replied, "My God yes, yes, I was.” He was awarded the Victoria Cross.

These are actions and inspiration to lean on in a time of crisis, hardship and foster our own spirit. We all sense fear in lives but must try not to succumb to it. Even the bravest are afraid.

We honour their sacrifice by living a good life in support of others; respecting the freedoms given us and inspiring others to build a better Australia and stronger Anzac spirit. We should strive to be worthy of these sacrifices made for us.

The Australian War Memorial was built on a promise - one our nation has a responsibility to uphold. A promise not just to an individual but for an individual… all of them… Those who served in the past, serving today and who will serve in the future. This place reminds those who wear our uniform that we care; that we are grateful for their sacrifice above self; that we have a place to reflect and that we will never forget – even if it is for just one of them.

I urge the young people to visit, learn and be inspired by these deeds. Look at the age of those who went, who stood up and committed. They were your age, if not younger.

That which we commemorate today and the brave and courageous behaviours we honour were undertaken by young men and women.

There is a sobering reality that comes with service and sacrifice.

A celebrated amazing feat can also be the worst day of another person’s life.

The day that they never walked again, talked again or never returned home.

Today and every day, remember all those sacrifices - those who suffered yet fought on and those who continue to do so today, not just in combat but also in support of others, who are now leaning on that spirit.

We will never forget what those ANZACS endured and gave at Gallipoli.

Be inspired by the sacrifice and spirit in the words of Cyril Bassett VC, A New Zealander recognised not for storming machine guns or rescuing wounded.

His citation in reads: “…under continuous heavy machine gun and rifle fire, he succeeded in laying a telephone line from the old position to the new one on Chanuk Bair.

He had to crawl into no man’s land to retrieve the separated ends and repair them with no shelter or covering fire, face down in the earth”.

Of the 760 men, 711 were casualties. He was a reluctant hero, in his words is a powerful reflection:

‘I have a lot to be thankful for…. I do not want to skite in case my luck turns. When I received my medal I was disappointed to find out I was the only New Zealander to receive one from Gallipoli, because hundreds of Victoria Crosses should have been awarded there……. All my mates ever got was a wooden cross.’
LEST WE FORGET