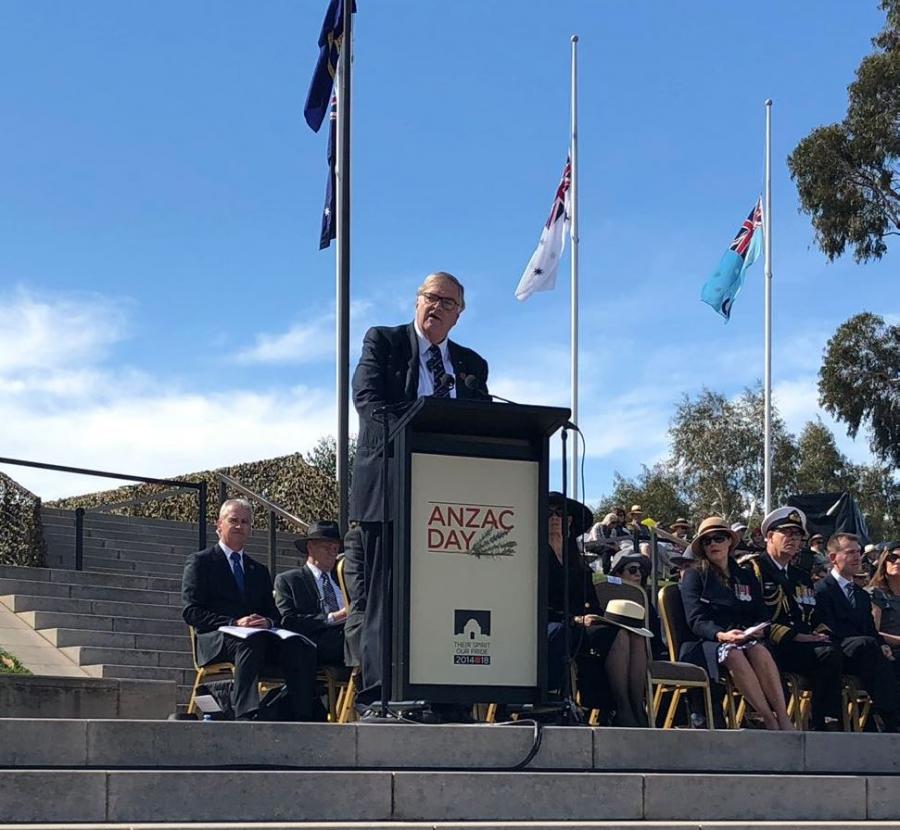 As we gather today our thoughts are not here. In our imagination we are looking back to 100 years. We are with our honoured ancestors. Specifically with the men of the AIF’s 13th and 15th brigades respectively under Brigadiers William Glascow and Pompey Elliot at the strategically important township of Villers-Bretonneux. Theirs is a vital counter attack to seize the town – one of the actions to sustain control of the approaches to the city of Amiens, critical for the British Army’s ability to operate in France. It is the last of a series of defensive battles blunting Germany’s last throw of the dice beginning in March 1918. From that point Australians had successfully engaged at Héberturne, Dernancourt, Moulan court ridge, Hangard Wood. Generally, as at Villers-Bretonnuex this night Australians brigades were engaging German divisions.

Coming off our bloodiest year in 1917, and despite the British Army’s setbacks early in the German offensive, our troops were of high morale. The fighting was expected to be vicious. The troops had bayonets fixed, equipped with more Lewis guns to make up in fire power what we lacked in man power, and carrying more ammunition in bullets and bombs than normal. The troops were conscious it was ANZAC day. As a sergeant later wrote: “The moon sunk behind the clouds. There were houses burning in the town throwing a sinister light on the scene. It was past midnight. Men muttered, “It’s ANZAC Day.” It seems there was nothing to do but go straight forward and die hard.” The 57th battalion began shouting and could be heard despite the noise: “The yelling rose high and passed to the 58th and 60th Battalions. Baying like hell hounds, they also charged.” Two years earlier, then Brigadier John Monash, a month or so after Villers-Bretonneux to be commander of the newly formed Australian Army Corps, reviewed the Gallipoli veterans. These troops, many of whom went to France, were entitled to wear an ‘A’ on their right shoulders. “This famous day…our day” said the Brigadier Monash, commenced this day’s commemoration. The men of the 13th and 15th brigades embellished this legend on this day 100 years ago.

From this point we were largely on the offensive for the rest of the year with battles at Hamel, Amiens, Mont St Quentin (capturing Péronne), breaking the Hindenburg Line and Montbrehain in October. Massively depleted through we were by these actions, and after a months rest, we were prepared to resume when the war ended. Though only a small part of the British Army, we have never been as impactful on world history as we were this year. Monash’s experimentation with combined arms operations at Hamel finally got fighting right. This was critical to the successes of the later battles. We practised them best. After Hamel, French President Georges Clemenceu visited the victorious Australians. He said: “I shall go back tomorrow and say to my countrymen ‘I have seen the Australians, I have looked into their eyes. I know that they, men who have fought great battles in the cause of freedom, will fight alongside us, till the freedom for which we are fighting is guaranteed for us and our children.” In 1918 it was a benchmark of German intelligence that if you found Australians on your front you could expect to be attacked within 48 hours.

The French living in the front line areas knew our value too. As members of the fourth division deployed north of Amiens, would be refugees unloaded their carts when they saw them. As one of them explained to the Australians – not necessary for us to go now ‘Vous les tiendrez’ – you will hold them. As a digger told another departing civilian “Fini retreat Madame – beaucoup Australiens ici.”

We emerged from the war triumphant but shattered and a sombre mood in Australia persisted through to the next world war. One in two extended families experienced a death. Over the decade or so after the war, the 61,514 dead were joined by about 60,000 others from war related causes. An Australian image was created by the soldiers. A masculine image of manly virtues – mateship, courage, initiative, stoicism, inventiveness, skill. In gender terms, that was a narrowly based perspective. The next war changed all that. In 1914-18 we judged survival of the British project essential for our security. We emerged with a reputation that belied our short existence. In the next war direct survival topped our agenda. We were all in – men, women, our immigrant and indigenous populations. We were the most mobilised belligerent. The legend and example of the veterans of the first war was a rallying point. That rallying point was extended to be societally all encompassing.

We have been since a member of a minority group in global affairs – we determine to militarily defend ourselves. That doesn’t mean we don’t seek and appreciate allies and friends. Nor does it eliminate the need for good international citizenship and a talent for turning past enemies and potential enemies into friends. However, that conviction of ours has seen our courageous record extend in numerous conflicts and peace keeping activities. We are in the field now. We are a good friend to have.

I believe at the heart of this conception is this day. It is a national day with a difference. A former American Ambassador told me he found it a sombre day. My Dad took me every year to a service. My Mum would stay quietly home. She, a ward of legacy, would try to remember her father. He died of illnesses picked up in Egypt when he was with the 10th light horse – not at Gallipoli but in the reinforcements after it. He passed when she was two. I asked my Grandmother why she never remarried. Two reasons – there were no young men and there was pride in being a war widow.

The day was not a product of officialdom. Officialdom resisted it at the start. ANZAC Day is a popular creation. A day for veterans. They speak and we join them. I must have attended in public life both local and major services around a hundred of these gatherings. It is not a day for the politicians except as they stand or sit humbly with their fellow citizens. This is the first major service I have spoken at in Australia in 33 years of public life. We have come, all of us, to commemorate the sacrifice of our allies – British, American, French many others. It has bonded us with our Kiwi kin. With them it is as Monash said at the first ANZAC Day: “This famous day… our day.”