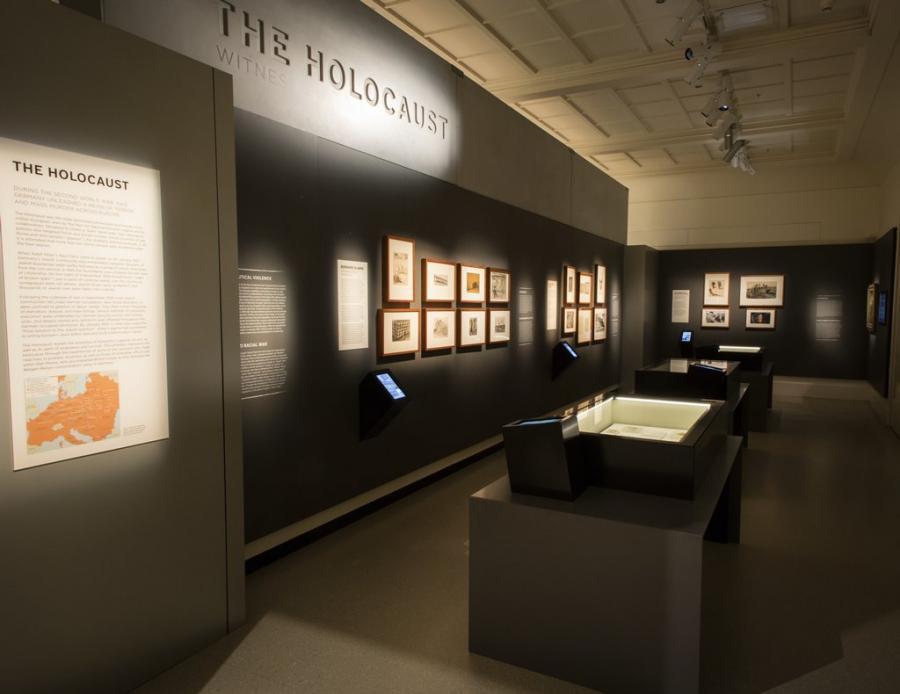 Witnesses and Survivors is located in the Second World War exhibition at the Australian War Memorial, Canberra.

That is how many were exterminated in the worst genocide of the twentieth century. Jews, Roma, gypsies, the disabled and political prisoners. But almost all were Jews.

Jewish identity has been shaped by three things:

Adolf Hitler was able to undertake this mass extermination for two principal reasons.

The first was that the majority were indifferent to the plight of the minority.

The second was that in Germany – as in other parts of Europe, anti-Semitism was deeply rooted – religious, secular and racial.

One observation through my own life not having ever faced nor endured even a fraction of the adversities suffered by many of you here, is that almost all of life’s suffering and pain stems from people making themselves the centre of their own lives. So too, nations making their own narrow self-interest the centre of all else.

In the Uses and Abuses of Australian History, Graeme Davison concluded that ethical and responsible citizenship demands each of us be imbued with the imaginative capacity to see the world through the eyes of others.

The Australian War Memorial is many things. But above all else is the repository of our nation’s soul.

This place and the stories of 2 million men and women told here, reminds us that we are Australians and that there are in the end some truths by which we live. And they are worth fighting to defend – politically, diplomatically and at times, militarily.

Not everyone agrees with this exhibition.

One regular visitor to the Memorial told me emphatically that she was opposed to this exhibition. “This has nothing to do with Australia and the Australian War Memorial”, she said. She told me that she would never walk through it.

It has everything to do with us, for we are a part of human kind.

In a world grappling with the mass movement of people; the persecution of political, religious and ethnic minorities; euthanasia and a generational struggle against resurgent totalitarianism in the form of those who have hijacked the good name of Islam to build a violent political utopia, we must remind ourselves of that of which humankind is capable.

Our responsibility is to stimulate and challenge visitors, Australian and international, to see the world through the eyes of others.

One of the most memorable experiences of my life – top ten, occurred here in this room in 2013. In this room we had hung the works of Alan Moore.

Alan Moore was commissioned by the Australian War Memorial as an official war artist during the Second World War. He deployed to the South West Pacific on New Year’s Day 1944, drawing and painting. He then went on to Europe and was there with the British at the liberation of the Bergen Belsen death camp in April 1945.

As I wheeled him along the wall behind me, in his late nineties he looked up at the works he had not seen for decades.

We stopped in front of a drawing of the SS guards removing the bodies of the dead women and children from the railway carriage. He whispered, “The Welsh guard….the Welsh guard. As I was drawing this, the Welsh guard told me that no one would believe it. He was right, so I went and got my camera and took photos as well”.

We paused again at a drawing of clearly non-descript buildings and a perimeter fence. There were objects of some sort on the ground and a man standing in their midst. Alan said, “The blind man…the blind man with the stick. He was walking amongst the dead and did not know it”.

Two generations ago, the leadership of the Australian War Memorial had refused to hang his works telling him, “No-one is interested in the Holocaust”.

The Australian War Memorial does not aspire to be one of the best museums in the world – it is. As such, we have a responsibility to tell the story of the Holocaust as responsible global citizens with a global outlook.

Every human being is an end unto himself,
and not a means to be used by others
Respect for one’s own humanity will be found
in respect for the humanity of others
and morality is freedom.

In this exhibition – this permanent exhibition will be found our own sense of morality, to be reminded of the difference between right and wrong and the consequences of allowing currents of political and social thought to head in certain directions.

Not a single person lobbied us to present this exhibition.

We are doing it because it is the right thing to do.

We still have seven objects and artefacts and story board in the World War Two galleries. There are now eighty five here.

We are proud of this, Witnesses and Survivors exhibition.