There are far more replica bugles than historic military bugles in the community. Usually made in India or Pakistan, commemorative replica bugles may honour an event, battle, unit, or family member. Some are of good enough quality to be played at Anzac Day or Remembrance Day ceremonies, and can provide a special addition to the atmosphere.

However, since entering the public domain many have lost their identities as commemorative items and have been mistakenly identified as genuine military bugles, with historic links to specific battles, units, or wartime events.

Questions to ask when looking at a bugle

While distinguishing between military bugles and replicas is not an exact science, the below questions can help. Some examples of replica commemorative bugles are also listed below.

Does this bugle have a known history?

Possibly the most important task when attempting to confirm a bugle’s authenticity is finding out the “who”, “what”, “where”, and “when” of its military history.

A soldered badge or stamped inscription detailing a person, unit, or event on a bugle is no guarantee that it is genuine, as commemorative bugles also have these.

Some historic military bugles feature personal inscriptions, or an inscription for a unit if it was presented before embarkation, which are usually engraved rather than stamped. Information about the presentation of these bugles can sometimes be located by searching contemporary newspapers on the Trove website.

Does it have a maker’s mark? 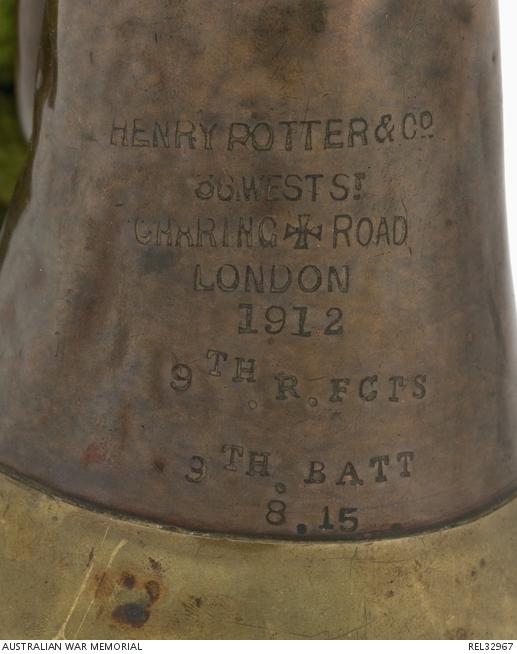 Image showing the maker’s mark (“Henry Potter & Co”) of a genuine bugle. Unit details are stamped beneath this mark. 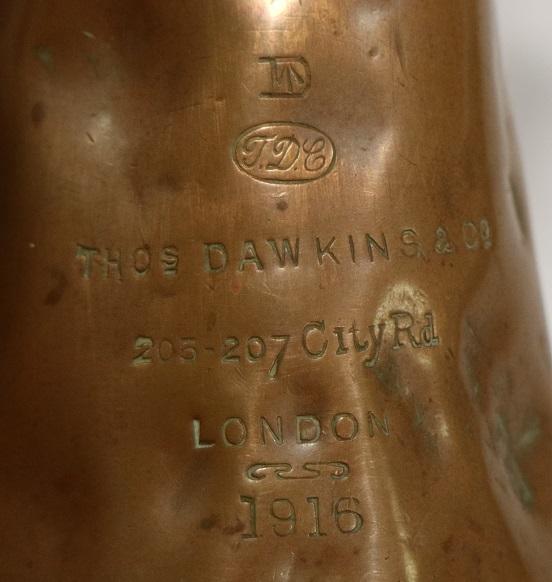 Maker’s mark and Defence mark on a 1916 bugle

Is there a badge soldered to the bugle where the maker’s mark should be?

Australian military bugles do not traditionally have badges soldered to them. While there may be genuine bugles which have had badges attached post war, in these instances a maker’s mark can still be seen, and the bugle will have a recorded history with a serviceman or unit, and be identifiable as genuine despite the addition. 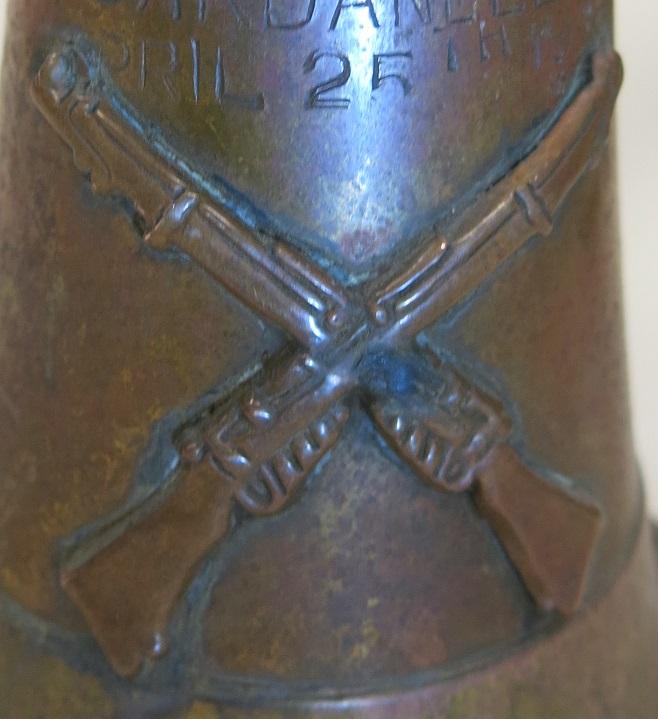 An example of a sand cast badge with two crossed rifles, used on the “Gallipoli” bugle (courtesy of S Medforth)

Most replica badges are sand cast copies which do not look at crisp as the corresponding die struck original badges. One exception is where they have copied unofficial original badges (such as the 13th Light Horse’s “dancing devil” badge), which were also usually sand cast. Replica badges often feature poorer definition and much thinner brass than original badges. 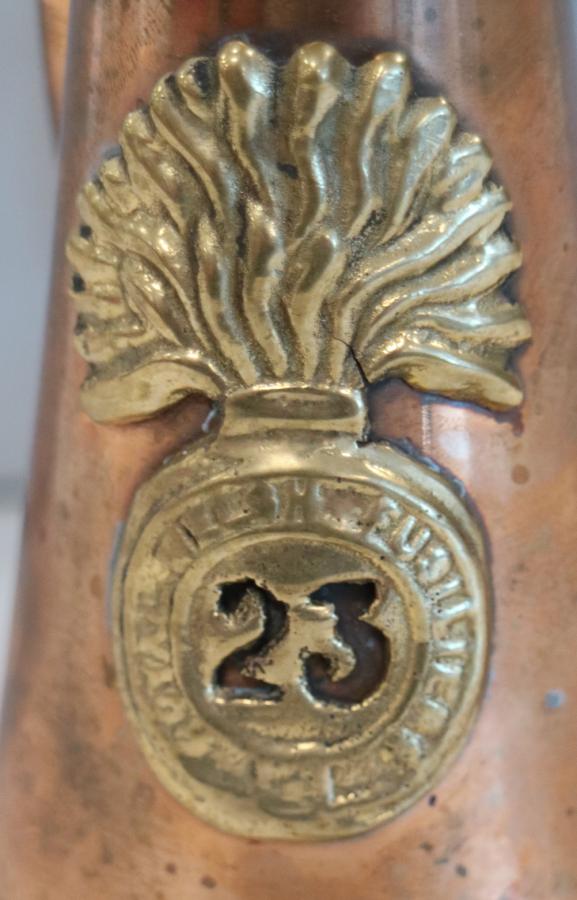 What is the quality of the inscription?

The quality of stamped inscriptions on replica commemorative bugles is usually low, which along with a sand cast badge can give a bugle a “trench art” feel that contributes to its aura of authenticity.

Some may have double stampings, where a letter has been struck twice in one spot, and some letters or numbers may appear out of order or not be fully pressed into the bell. The Camel Corps bugle, for example, features an incomplete “B” in “MAGDHABA”, looking more like an “R”, and the text is incorrectly recorded in descriptions as reading “MAGDHARA”.

Below is an image of the inscription from a Kokoda commemorative bugle. Some letters have been double struck, other have not been struck properly, and unusual lower case letters (in this case “i”) have been used, whereas the First and Second AIF used upper case letter dies  (courtesy of S Medforth) 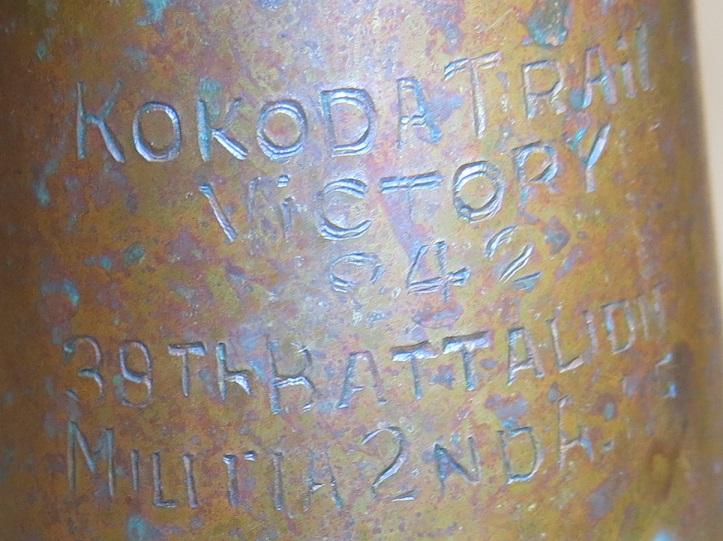 Inscription from a Kokoda commemorative bugle.

Replica bugles often have poor quality mouthpieces and it can be difficult to get a good sound from a replica bugle. Original bugle mouthpieces are sometimes nickel plated and may have maker’s marks and Defence markings on them. In some instances where the nickel has started to wear away, evidence of its former presence is still apparent. If a bugle has been used over many years it may have a replacement mouth piece.

Examples of replica bugle mouthpieces of varying quality, the one on the left is particularly thin and cheap looking.

Examples of genuine mouthpieces from bugles in the Memorial’s collection showing maker’s marks and Defence marks.

What is it made from? What is the bugle’s finish?

Unless highly polished, replica bugles can have a patina that makes them look old, but they don’t always show the sort of damage that would be expected of a military bugle that had survived a war. The patina of replicas is artificially applied and as a result often appears spotty. A genuine bugle (if it hasn’t been polished) will usually have an overall dull brown colour. 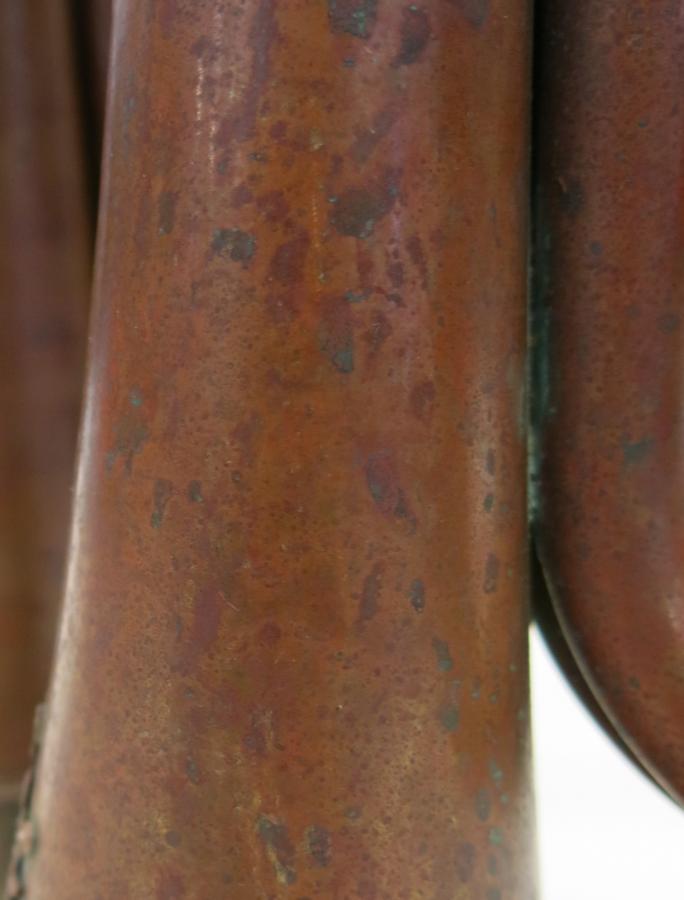 Aged finish on a replica bugle, which is mottled.

Below is an image of a genuine bugle that has been chromed post war. You can tell it is genuine by the maker’s information on the front and because it has a known association with a serviceman.

Does the bugle have cords?

Replicas may have cords (called “strings” by the military) that are often made from nylon. Being synthetic, they tend to be shinier than original historical cords, and are often multi-coloured, such as red and gold; blue, white and red; or red, gold and black – not the colours used by the Australian Army during war (usually green). 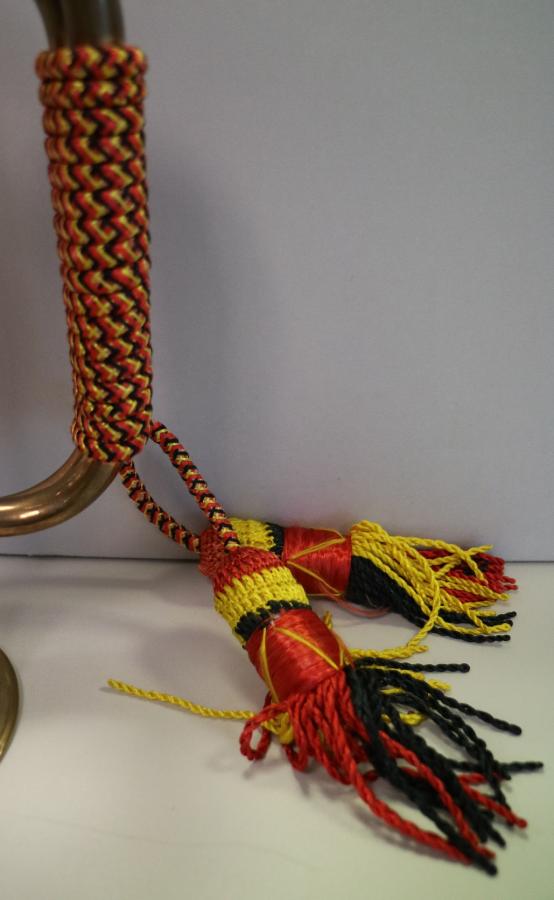 How much does it weigh?

Replicas often weigh between 100 and 350 grams lighter than genuine bugles. A genuine bugle weighs around 600–800 grams, while replicas weigh around 300–600 grams (depending on quality and if it has cords).

The bugles detailed below are commemorative replicas, multiple examples of which have been sighted, or which have been identified by sales information acknowledging them as replicas. This list is not exhaustive, but certain features are evident that are common in replica bugles.

Stamped “GALLIPOLI LANDING DARDANELLES APRIL 25TH 1915”. These replica bugles sometimes have a badge soldered to the bell beneath the inscription. If there is no badge, the inscription is located where the maker’s mark would be for a genuine military bugle. 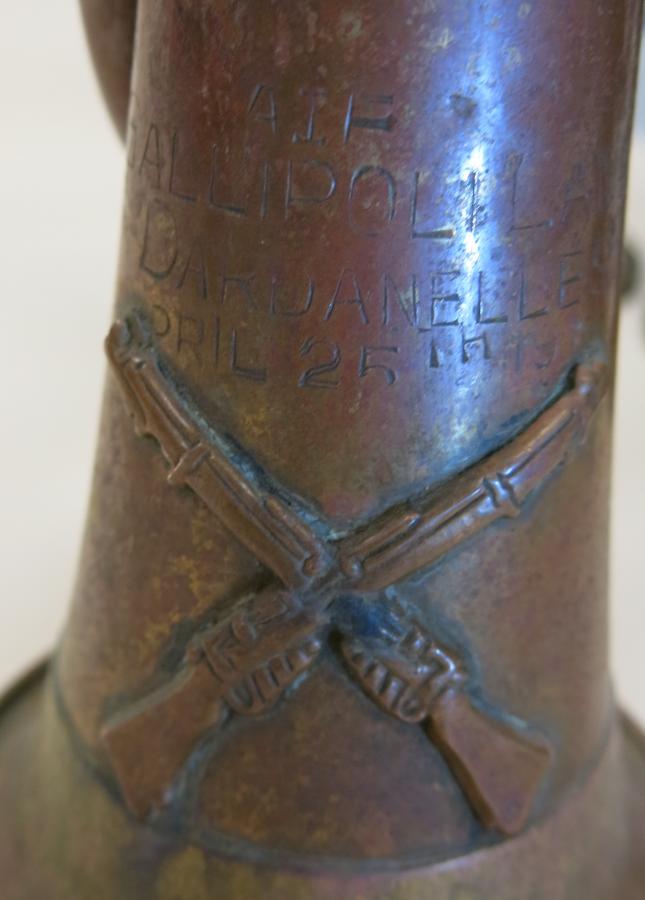 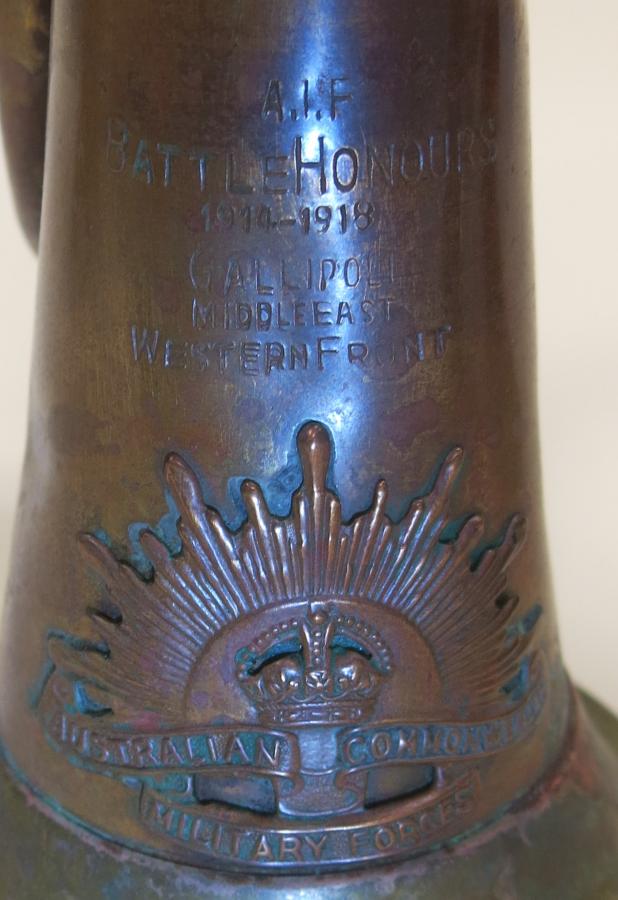 As previously mentioned, most examples of this bugle sighted are poorly stamped and “MAGHDABA” looks like “MAGHDARA”. The year 1916 is often incorrectly stamped, sometimes appearing as “116”, or with other numbers appearing after the “6”.

The Rising Sun badge is overlaid by a poor quality sand cast camel (which is made of a different metal) and gaps between the two can be seen. 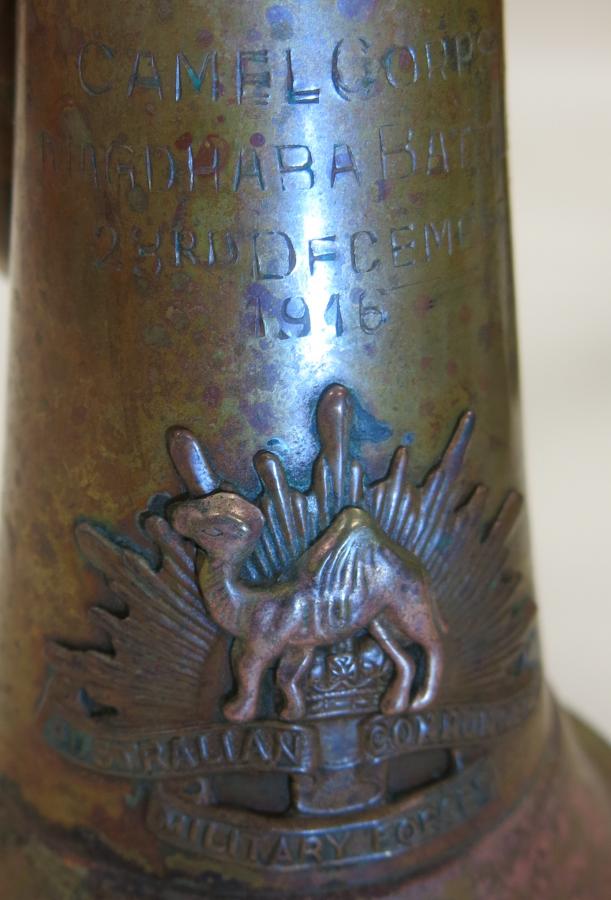 Stamped “13TH AUSTRALIAN LIGHT HORSE”. The unofficial 13th Light Horse badge with a “dancing devil” is attached to the bugle below the inscription. 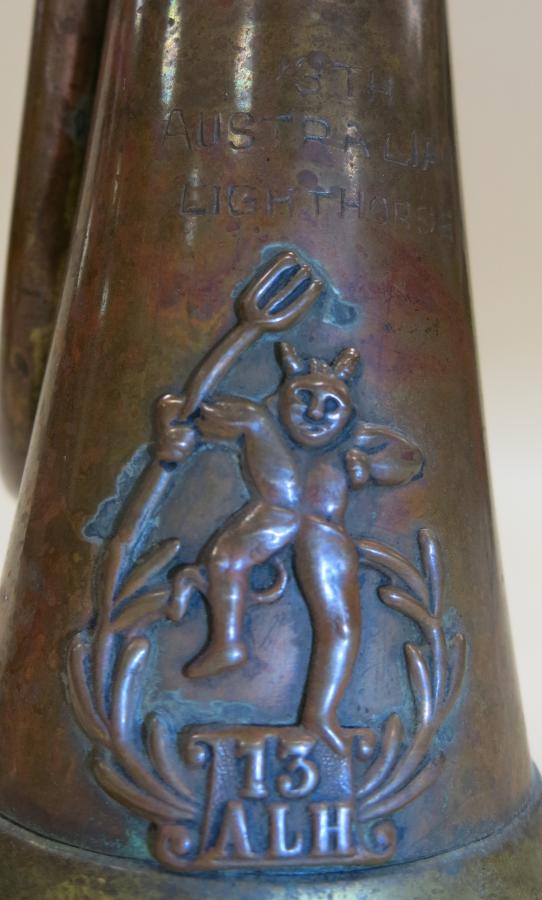 Stamped "AUSTRALIA 9THDIVISION OF TOBRUK 1941" above a Rising Sun badge and a curved “AUSTRALIA” shoulder title.

Stamped “KOKODA TRAil ViCTORY [1]942 39th BATTALION MILITIA 2nd A.i.F”, above a Rising Sun badge. The use of the lower case letter ‘i’ is particularly unusual. Contemporary die sets used by the military only contained upper case letters, which helps indicate this is a modern day commemorative replica. 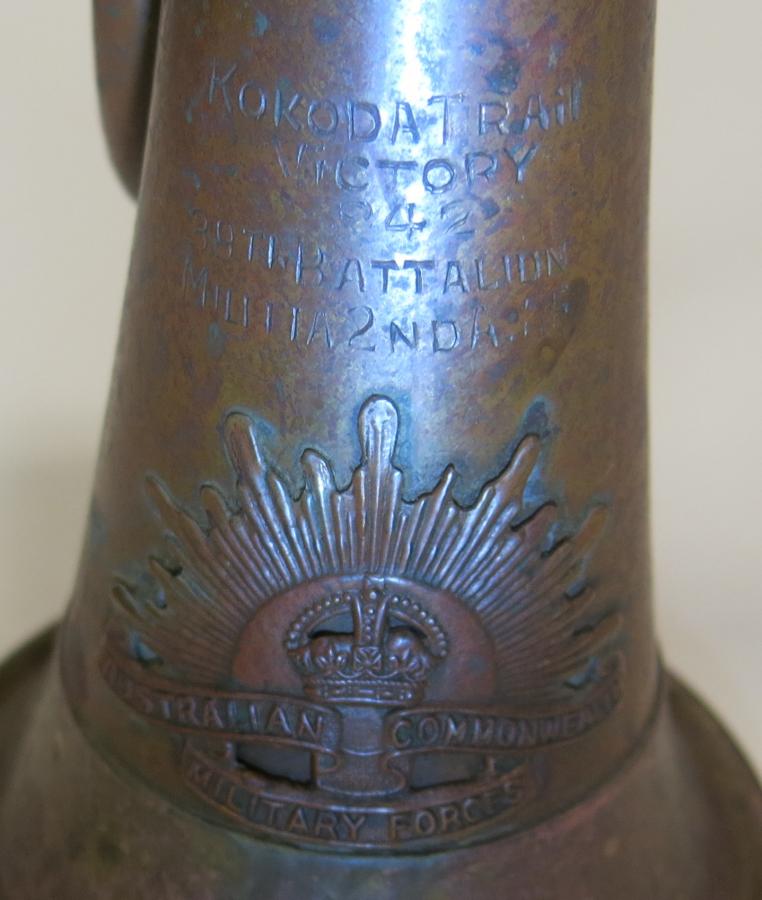 Stamped “LONG TAN BATTLE VIETNAM WAR 18TH AUGUST 1966”, above the Infantry Corps badge. 6RAR did not use bugles at the Battle of Long Tan. While the Viet Cong did play bugles during the battle, these were of a different design to those used by the Australian Army.

These bugles have a unit badge soldered to the front and may have multi-coloured cords. They have been found in many countries, including the United Kingdom, America, and Chile. Information about this bugle is available on the West Australian University’s website.