It is with great pleasure that the Australian War Memorial announces the appointment of Major General Brian Dawson AM CSC (Ret’d) to this new role which will be governed by a proposed Anzac Centenary Touring Exhibition Steering Committee on behalf of the Federal Government.

Major General Dawson AM CSC (Ret’d) will provide strategic direction for the Anzac Centenary Touring Exhibition which will be a major feature of Australia’s commemoration of the First World War. He will work directly to the Memorial’s Director, Dr Brendan Nelson, in overseeing development of the exhibition through to and including its tour of Australia.

Major General Dawson AM CSC (Ret’d) feels privileged to have the opportunity to contribute to the national commemoration of the Centenary of Anzac.

“After a 40 year career in the Australian Army, I believe I can help bring a deep insight to the extraordinary contribution and sacrifice of Australians in the First Word War,” said Major General Dawson AM CSC (Ret’d).

Dr Nelson welcomed the appointment of General Dawson AM CSC (Ret’d), as he brings a wealth of experience to the position, which is critical to the delivery of these projects.

“The Centenary Touring Exhibition is vital in helping Australians remember and understand our experience of war during this significant period, and we believe that Brian is the man to achieve this,” said Dr Nelson.

“I look forward to working with the Director and the professional team at the Memorial to plan and implement the Anzac Centenary Touring Exhibition,” said Major General Dawson AM CSC (Ret’d). 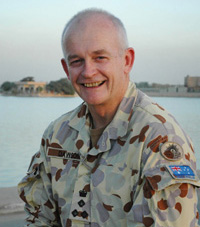 His most recent appointment (May to October 2013) was as a member of a consultant project team that developed a proposal for the NSW Department of Transport regarding the implementation of a grain harvest management scheme, to provide mass tolerance and improved productivity for heavy vehicles transporting grain from farms to receiving sites.  Prior to this, he had a long and distinguished career in the Defence Force before retiring from the Australian Regular Army in April 2013 after forty years’ service.

His final posting was as the Australian Military Representative to the North Atlantic Treaty Organisation (NATO) and the European Union (EU) from 2010 to 2013. As the first Australian Military Representative, he established the new role and developed relationships with other international military and diplomatic representatives.  He was responsible for representing Australia’s interests with NATO, specifically the Australian Defence Force’s contribution to NATO in Afghanistan and facilitated the successful negotiation of a logistic support arrangement between NATO and Australia.

Other appointments during his time in Defence included:

He was awarded Member of the Order of Australia (AM) in 2000 for work in Defence logistics and Conspicuous Service Cross (CSC) for service in Somalia in 1995.

Major General Brian Dawson AM CSC (Ret’d) has visited and walked the ground of the major Australian First World War battlefield sites on the Western Front, and has read widely on these battles. He has also conducted informal battlefield tours for visiting Australian politicians and senior officials.