In the late 1930s Australia began an ambitious program to mass-produce bomber aircraft for the Royal Australian Air Force (RAAF). The chosen design was the British Bristol Beaufort, a twin-engined machine with a crew of four that could carry either a torpedo or bombs. A fleet of Beauforts would patrol Australian's vast coastline, and fly far out to sea to strike at an invasion fleet. Seven hundred bombers were constructed between 1941 and September 1944.

Making the Beaufort was an enormous effort for Australia. Each bomber needed 39,000 carefully manufactured parts. Drawing on a tiny industrial base and few skilled workers, the Beaufort Division of the Department of Aircraft Production (DAP) grew until it occupied seven large factories in three states. DAP had 8,500 employees, of which one-third were women. Tens of thousands more people worked for the 600 private subcontractors. 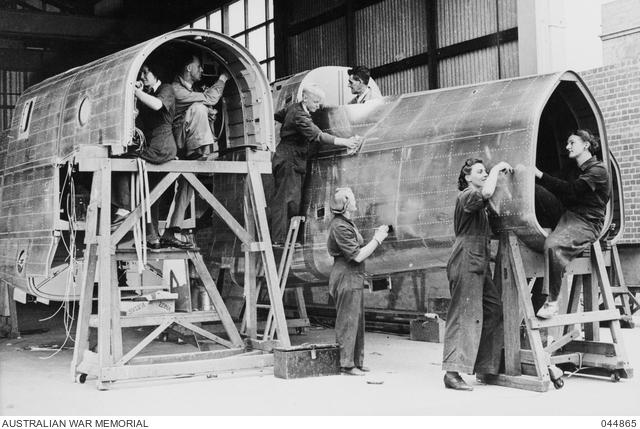 Construction of a Beaufort aircraft, c. 1944.

From 1941 the Beaufort was pressed into service to counter the Japanese threat, with new aircraft being flown direct to the New Guinea battlefronts and northern Australia. The Beaufort rapidly became the RAAF's main bomber type in the Pacific war, being used by 19 front-line squadrons, of which nine were all-Beaufort equipped. Other machines were sent to patrol the coasts, escort ship convoys, or fly with Operational Training Units (OTUs) in NSW and Victoria. 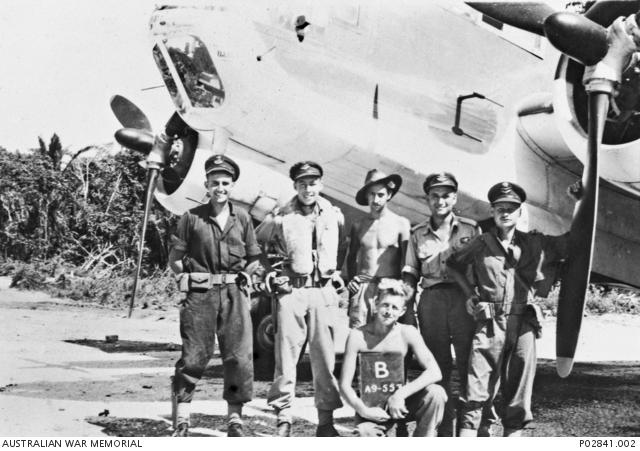 A9-557 was received by the RAAF in the first week of January 1944, and was delivered to 100 Squadron in July. It spent its entire operational career in New Guinea, operating from a number of airstrips, including Vivigani (Goodenough Island) and Tadji (near Aitape).

The Memorial's Beaufort carried out its first combat sortie, a bombing raid on Yakamul, on 10 July 1944. During seven months of operational flying the aircraft completed over 103 missions, and dropped 146,000 pounds [66,225 kilograms] of bombs. It was flown by 19 different crews.

On 20 January 1945 the aircraft was wrecked in a spectacular crash landing at Tadji. Returning from a raid on a village at Elimi with shell-hole damage and a live bomb jammed in the bomb bay, it ran off the runway and collided with parked vehicles as well as a nearby building. The damaged Beaufort was removed, carefully stripped of useful parts by a Repair and Salvage Unit, and dumped. It lay in the jungle at Tadji for 29 years. 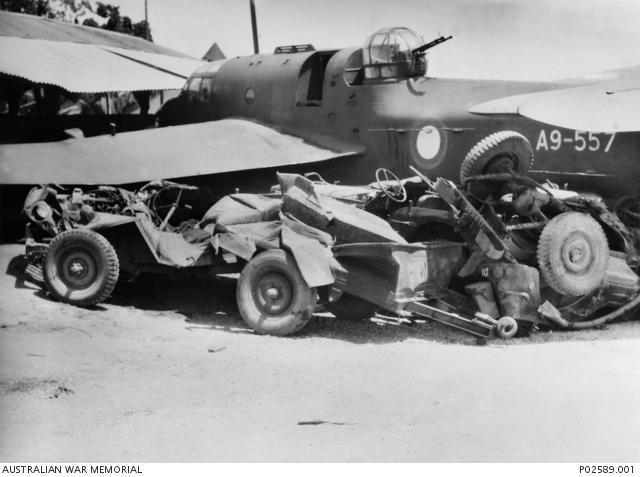 A badly-damaged Australian army jeep under the tail of A9-557 after its crash landing at Tadji, New Guinea, on 21 January 1945.

Beaufort A9-557 was acquired by the Memorial in 1992. Reconstruction of the aircraft is proceeding with the aid of parts found across Australia, and sections recovered from the USA and Papua New Guinea.

Reconstruction of the Beaufort commenced with the aid of parts found across Australia, and sections recovered from the USA and Papua New Guinea.  Work began in 1996 with a contract to rebuild the tail plane. External contractors examined and repaired major sections to ensure structural integrity while retaining as much original material as possible. While work on these sections took place, the Memorial team concentrated on refurbishing the many smaller detail parts to be used to fit out A9-557.

Original paint surfaces were retained and lightly polished to remove oxidation. New paint, matched to the original colours was applied to the new skins on the wings, stern frame and areas of the fuselage. The aircraft has been painted in green and dark earth camouflage on the upper surfaces and pale blue on the undersurfaces to reflect its wartime service with 100 Squadron serving at Tadji, Papua New Guinea in 1944 and 1945.

Major fuselage sections being trial-fitted together 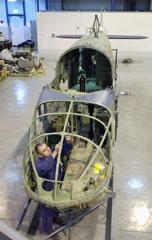 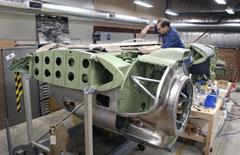 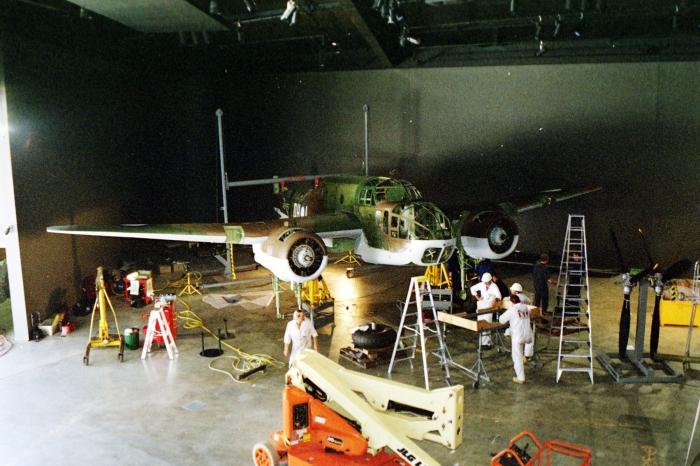 Image: Reassembly of the airframe in Anzac Hall, with the tail elevated to enable reattachment of the wings 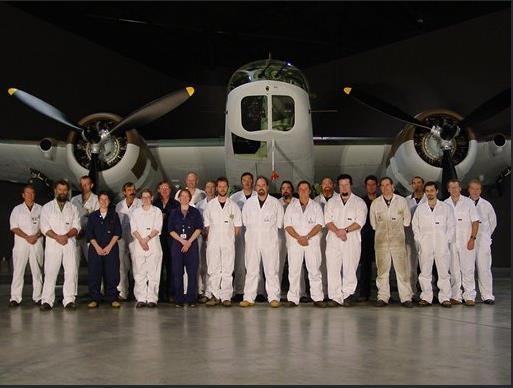 A9-557 was displayed in Anzac Hall for a short time in 2003 for a Beaufort veteran reunion event.

Restoration work on the Beaufort was suspended in 2003, the airframe returned to storage and the many hundreds of spare parts boxed and palletised.

In 2020, the restoration recommenced with the Beaufort returned to its previous position in the warehouse where all remaining spare parts will be restored and reattached to the airframe. 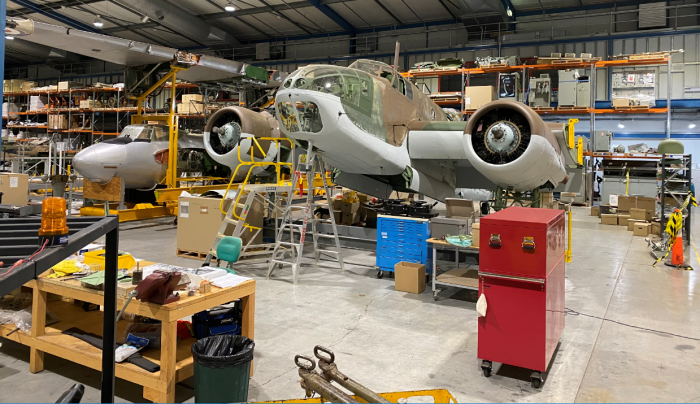 In the scoping stage, all spares that were assessed for inclusion in the project were also checked for hazards, in particular radiation and asbestos.  Radiation sources or contamination can be found in aircraft of this era in luminescent dials or paint on instruments. 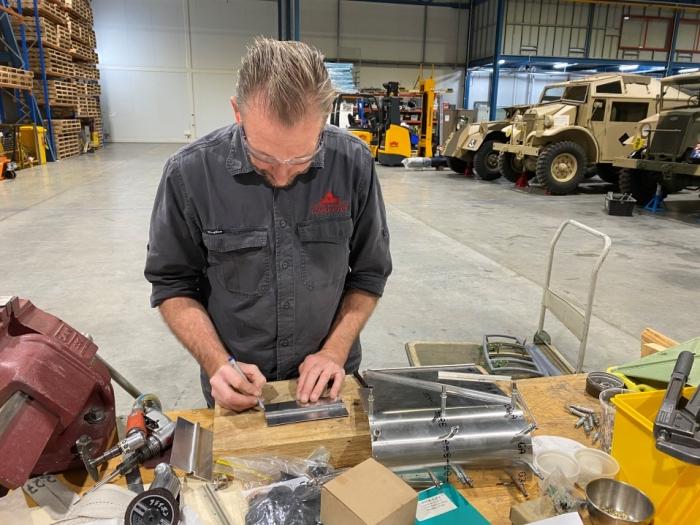