Over the next four years, 2014–18, the Australian War Memorial will host a program of events, exhibitions, and activities surrounding the centenary of the First World War. The centenary is an opportunity for Australians to look back on this momentous event in world history, to understand the impact it had on our nation, and to remember the service and sacrifice of our First World War soldiers. To represent this centenary program, a logo has been developed that takes its inspiration from the iconic Memorial building.

The logo comprises several elements that derive from the history, mission, and purpose of the Australian War Memorial but also reflects symbols of the First World War and the Australian nation of today. 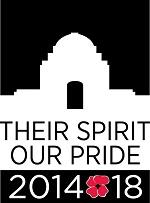 The poppy is a symbol of commemoration and sacrifice with a history tied to the Armistice of 11 November 1918. During the First World War red poppies were among the first plants to grow in the devastated battlefields of northern France and Belgium. Poppies have also become synonymous with the Australian War Memorial: each year thousands of visitors place red poppies next to the names of friends and loved ones on the Roll of Honour who have made the ultimate sacrifice for the nation.

The Memorial’s centenary program will run throughout the period 2014–18, marking 100 years since the First World War. These dates recall Britain’s declaration of war on 4 August 1914, in response to Germany’s violation of Belgian neutrality, and the signing of the Armistice on 11 November 1918 that ended the fighting.

Charles Bean conceived the idea of an Australian war memorial and museum during the darkest days on the Western Front. In 1948 he summed up the Memorial’s mission and purpose with words that have since become famous: “Here is their spirit, in the heart of the land they loved; and here we guard the record which they themselves made.” Bean’s words, and the vision they encapsulate, will continue to inspire the Memorial’s exhibitions, events, activities, and projects over the centenary years and beyond.

The centenary of the First World War is a milestone of special significance for all Australians. This war remains our most costly conflict in terms of deaths, casualties and psychological trauma; its effects touched the lives of nearly every Australian family and community.

The silhouette of the iconic Memorial dome and building completes the design of the centenary logo and ties it into the Australian War Memorial brand.

The First World War centenary logo is owned and managed by the Australian War Memorial. If you would like to permission to use this logo, please contact awmbrand@awm.gov.au 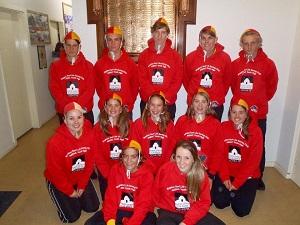 To commemorate the centenary of the landings at Gallipoli a number of teenagers from the Brighton Surf Life Saving Club participated in a special ANZAC vigil.