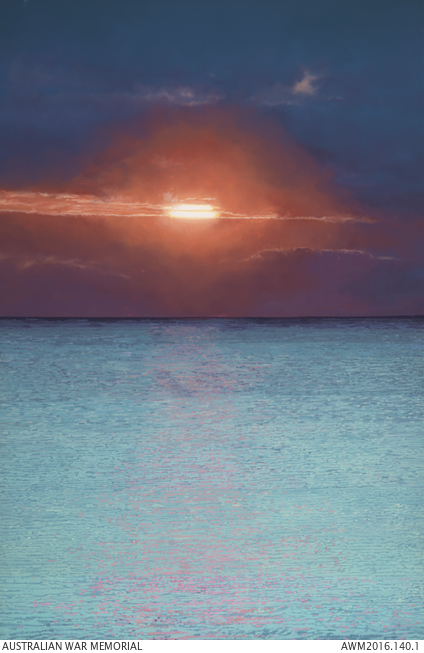 In 2015 the Australian War Memorial commissioned Melbourne-based artist David Jolly (b. 1972) to attend the centenary Anzac Day Dawn Service on Gallipoli. Jolly spent a week walking the battlefields and visiting official war graves of Commonwealth, Turkish, and French troops on the peninsula. He was on site for the ceremony from the afternoon of 24 April, watching as thousands of audience members arrived and began the long wait for dawn.

Jolly documented his visit with photographs, drawings, film, and sound recordings. On his return to Australia he completed a series of seven reverse-paintings on glass depicting his experience on the peninsula.

The Gallipoli Dawn Service marking the centenary of the Anzac landing was one of the most significant commemorative events in Australian history. Jolly’s works document the progression of time from his arrival at North Beach, through the long night to the Dawn Service and the weary crowd’s long walk to the subsequent ceremony at Lone Pine. Here he has sought to record the importance of the centenary Dawn Service to contemporary Australians by depicting the event’s key symbolic moments and the effort people made to attend.

As an artist Jolly presents his observations of the world around him, at home and abroad, through his long-established practice of painting on the reverse side of glass. He completed a Bachelor of Fine Art at the Victorian College of the Arts and has exhibited widely in Australia and internationally. His works feature in many public collections, including those of the British Museum, the National Gallery of Australia, the National Gallery of Victoria, and the University of Melbourne. He was a finalist for the 2008 and 2010 Basil Sellers Art Prize, and has undertaken residencies in Malaysia and Barcelona.

The Gallipoli Centenary Commission continues the Memorial’s longstanding program, beginning in 1916 with the official war art scheme, of engaging Australian artists to respond to our nation’s experience of war and operational service. This tradition has produced works depicting Australian military history as well as major commemorative events.