When it was colonised by Europeans, Australia was declared terra nullius; there were no formally binding treaties made with Indigenous Australians, so there was no recognition of the rights of the Indigenous inhabitants.

The Defence Act of 1903 stated that all males aged from 12 to 25 would receive military training; as Aboriginal Australians were not of European descent, they were exempt from military service. (It was not until 1949 that all restrictions were lifted, enabling Indigenous Australians to join the Australian military forces.)

At the outbreak of the war large numbers of Australians came forward to enlist, and Aboriginal Australians also answered the call. Best current estimates are that about 1,000 Indigenous Australians – out of an estimated population of 93,000 in 1901 – fought in the First World War (though the real number is probably higher). It is not known what motivated Indigenous Australians to join the Australian Imperial Force (AIF), but loyalty and patriotism doubtless played a part. There was also the incentive of a receiving a wage. Indigenous soldiers were paid the same rate as non-Indigenous soldiers. In general, indigenous soldiers served under the same conditions of service as other members of the AIF, with many experiencing in the army equal treatment for the first time in their lives. There may have also been the hope that having served would deliver greater equality after the war. In reality, however, upon their return to civilian life they were treated with the same prejudice and discrimination as before.

Only rarely did the Australian army note on a soldier’s attestation papers whether he was 'Aboriginal'; often just a description, specifying dark complexion, dark hair, or brown eyes, was entered. However, note was made of a soldier’s Aboriginality, in the event of his being discharged as unfit for service because of it.

By the end of 1915 it became harder for Aboriginal Australians to enlist, and some were rejected because of their race. But this did not deter others, and some travelled hundreds of kilometres to enlist after being turned down at centres closer to their communities. Some who had been passed by the recruiter were then rejected while under training in the camps.

Instructions for the “guidance of enlisting officers at approved military recruiting depots” issued in 1916 state that “Aboriginals, half-casts, or men with Asiatic blood are not to be enlisted – This applies to all coloured men.” However, some Indigenous Australians who were of lighter skin colour with mixed European parentage enlisted by claiming foreign nationality. It was usually left up to the recruiting officer to decide whether to allow the person to enlist, so people with darker-skin did sometimes slip through.

By October 1917, when recruits were harder to find and one conscription referendum had already been lost, restrictions were cautiously eased. A new military order stated: “Half-castes may be enlisted in the Australian Imperial Force provided that the examining Medical Officers are satisfied that one of the parents is of European origin.”

Richard Martin joined the AIF on 17 December 1914 and declared on his attestation papers that he was born in Dunedin, New Zealand, claiming that he had five years’ prior service in the Australian Light Horse. Richard in fact was born on Stradbroke Island in Queensland. He was taken on the strength of the 15th Battalion on 9 May 1915 on Gallipoli.

Martin was transferred to the 47th Battalion in Egypt in March 1916 and went on to serve in France, where he was wounded in action on 9 August 1916. He again was wounded in action on 7 June 1917 in Belgium and a third time on 13 October 1917 with a gunshot wound to the right hand. He rejoined his battalion on 27 February 1918 and was killed in action a month later. Some records suggest he was buried in the cemetery at Dernancourt, but a later document states his grave could not be found. 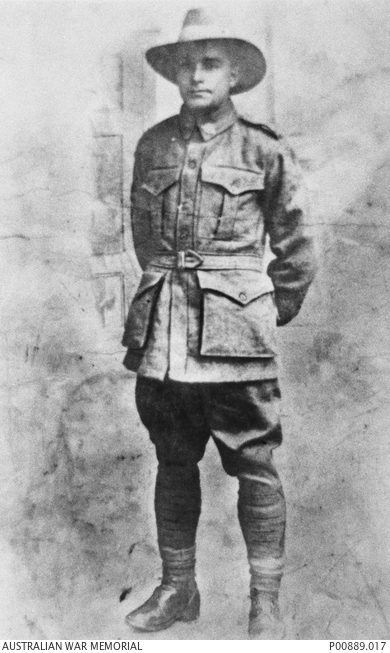 Edmund Bilney joined the AIF in June 1917 (before the easing of restrictions in late 1917); a note on his attestation papers describes him as a half-cast. Bilney was attached to B Company, Mitcham AIF Camp, South Australia, for training but was discharged after serving just 16 days, the medical board having described him thus: “deficient physique, half cast Aboriginal, too full blood for the AIF”.

Harry Thorpe was born at the Lake Tyers Mission Station, near Lakes Entrance, Victoria. He enlisted at Sale on 12 February 1916, and embarked from Melbourne on 4 April 1916 aboard HMAT Euripides. He joined the 7th Battalion in France in July 1916. He was wounded in action at Pozières in 1916 and Bullecourt in 1917.

Lance Corporal Thorpe was awarded the Military Medal and promoted to corporal for his conspicuous courage and leadership he showed during operations at Broodseinde, near Ypres, in Belgium, on the night of 4–5 October 1917. During the advance on 9 August 1918 at Lihons Wood, south-west of Vauvillers, France, a stretcher-bearer found Thorpe shot in the stomach. He died shortly afterwards and is buried in the Heath Cemetery, Harbonnières, France, with his friend William Rawlings, another Aboriginal Military Medal winner who was killed on the same day. 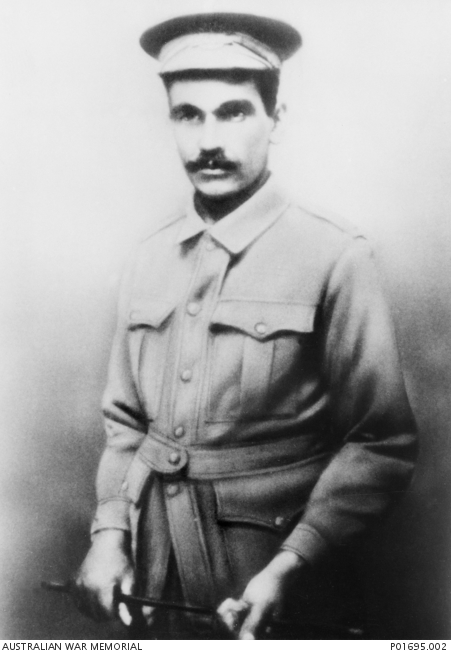 Douglas Grant was born into a traditional Aboriginal community in the Bullenden Kerr Ranges of Northern Queensland in the early 1880s. His early family life was torn apart in 1887 when his parents and much of his Aboriginal community were killed in what was believed to be a tribal fight. He was rescued just moments from death by scientist Robert Grant, a Scottish immigrant surveying in the area at the time. Naming him Douglas, he raised him as his son.

The Grant family settled in Lithgow, New South Wales. Douglas, along with Robert’s other son, Henry, attended Scots College in Sydney. There, he developed a love for Shakespeare and poetry, and his talent for drawing was encouraged. After finishing school, Douglas pursued his interest in drawing, training as a mechanical draughtsman.

When the First World War broke out Grant managed to enlist with the 34th Battalion in January 1916. However, as he was about to leave Australia the Aborigines Protection Board intervened, noting that regulations prevented Aboriginals from leaving the country without government approval. Undeterred, Grant enlisted again, and this time successfully embarked with the 13th Battalion in August.

However, his service was to be short-lived. On 11 April 1917, just two months after arriving in France, Grant was captured during the first battle of Bullecourt. In this battle at least 3,300 men were killed or wounded and a further 1,170 were taken prisoner.

Grant was a well-educated, articulate man with a thick Scottish accent. As such, he was a person of curiosity to German doctors, scientists, and anthropologists. To his comrades, however, he was cherished as a remarkable figure who proved to be both honest and quick-witted.

After his capture, Grant spent two months in France. However, owing to his dark complexion, he ended up at Wünsdorf (Zossen) prisoner-of-war camp in the German state of Brandenburg. Wünsdorf was a Halbmondlager (“half-moon camp”), a special type of “show camp” where the Germans kept French and British colonial troops, many of whom were Muslims, hoping to exploit their supposed indignation towards their colonial masters. While there, Grant supervised the distribution of comforts to Indian prisoners as a member of the British Help Committee.

After 22 months, Grant was repatriated to Australia, where he resumed his job as a draughtsman before moving on to work as a labourer in a paper factory and then a small-arms factory. He lobbied for Aboriginal rights and became active in returned servicemen’s affairs. Grant died in 1951, aged 65, and was buried in Botany Cemetery in Sydney. 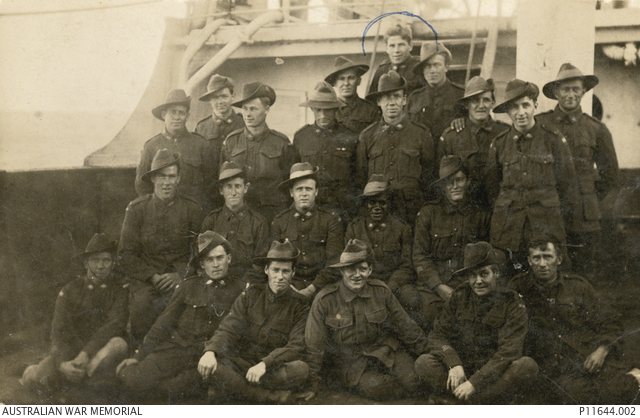 6020 Pte Douglas Grant (second row, seated fourth from the left) returning to Australia with other soldiers on HMAT Medic in 1919.