Mephisto – rarest tank in the world

Tanks were one of the First World War’s major technological innovations. They were first developed by the British, and were later taken up by France. The Germans began developing their own tanks after the British first deployed theirs during the battle of the Somme in 1916.

Of Germany’s A7V Sturmpanzerwagen, only 20 were ever built for use in war. They saw limited service on the Western Front in 1918, and today only one survives – number 506, “Mephisto”. 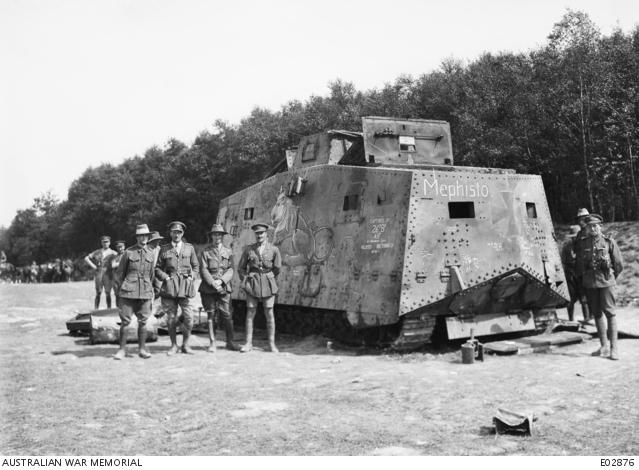 These newly invented war machines were hot, noisy, and cramped. The German models held much larger crews than the British, with anywhere between 18 and 26 men on board. The driver and commander sat above the tank’s engine, wearing asbestos-impregnated suits to protect themselves from the heat, while others preferred to sit atop the tank when not in action to escape the fumes and discomfort of the interior. Despite the tank’s protective armour, each hit sent tiny particles of hot metal flying off the inside walls and onto the men’s faces. In battle the machines lurched through shell holes and trenches, and the men inside were thrown around mercilessly. Visibility was difficult through the small vision slits in the sides and front, and the tanks stopped regularly for the officer in charge to reorient himself. Despite these problems, the value of the armoured machines was such that they were prized by all sides – the British through ongoing development and production, and the Germans through the salvage and reuse of broken British tanks taken from the battlefield. 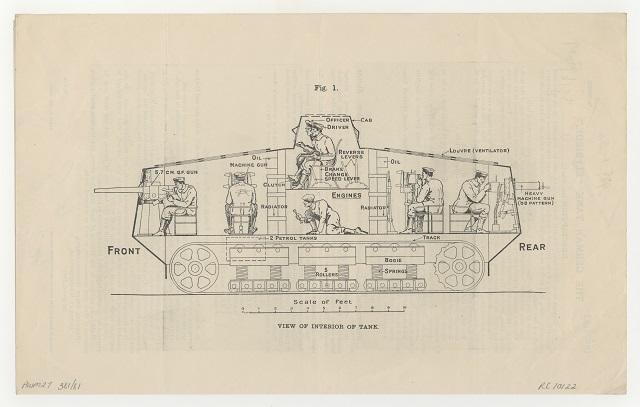 The A7V was German-designed, and number 506 was part of the first German army tank detachment. Like most of the tanks in this unit, it bore a white skull-and-crossbones on the front armour plating beneath the main gun. Most of the German tanks were given names like “Siegfried”, “Wotan”, and “Gretchen”. Their crews often added their own decoration, painting over the standard field grey finish or the previous crew’s decoration.

Tank 506 was painted with the figure of Mephistopheles, the red, smiling Faustian demon, on the upper front left armour plate. Cheekily tucked under the demon’s arm was a rhomboid-shaped British tank. The original skull-and-crossbones was overpainted with a single cross pattée, or German cross. This same black and white cross was repeated prominently on both sides of the tank, giving it unique identity within the small tank unit. It was named Mephisto, in honour of its fiery decoration. 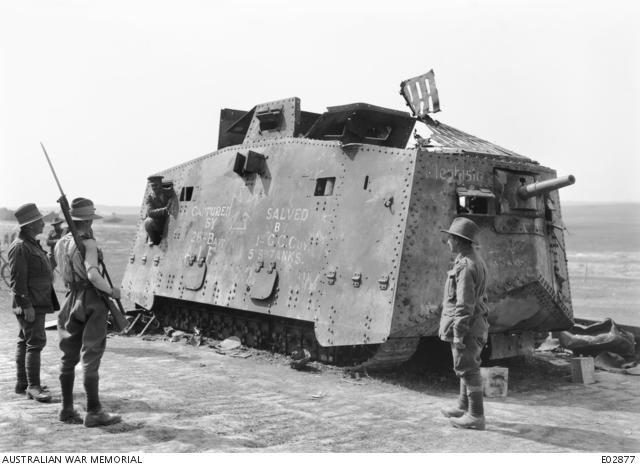 Mephisto fought its first ever battle at St Quentin on 21 March 1918. Its second operation came at Villers-Bretonneux on 24 April 1918. In that attack it became stranded in a shell crater, and was eventually recovered from the battlefield by men of the AIF and their British comrades. It was moved to the training ground of the British 5th Brigade, Tank Corps, at Vaux-en-Amiénois and later to Poulainville (near the city of Amiens) until early October 1918. During this time countless allied soldiers left their marks on the vehicle, and the armour became littered with names, quotes, drawings, and paintings. The most prominent piece of art applied was a counterpart to the German demon: a large, crown-wearing British lion, its right paw resting on an A7V tank.

Brought to Australia in 1919 as a war trophy, Mephisto has been housed at the Queensland Museum in Brisbane ever since. The machine was so heavy that a special crane had to be erected on the wharf to unload it. On its way to the museum the tank’s caterpillar tracks gouged the road, and its sides damaged several buildings as it was dragged around corners. It was initially placed in the grounds of the museum, and the inscriptions and paintings adorning its sides were badly weathered and faded by exposure to the elements, while parts of the tank were pried off by members of the public. Mephisto’s current paint scheme was applied by the Queensland Museum in 1988.

Eighteen of the original 20 A7Vs produced by Germany survived the war more or less intact. However, most were scrapped in the years immediately following the Armistice. Mephisto is the world’s only remaining example.

For more information about Mephisto visit the Queensland Museum website.

Presented in collaboration between the Queensland Museum and the Australian War Memorial.