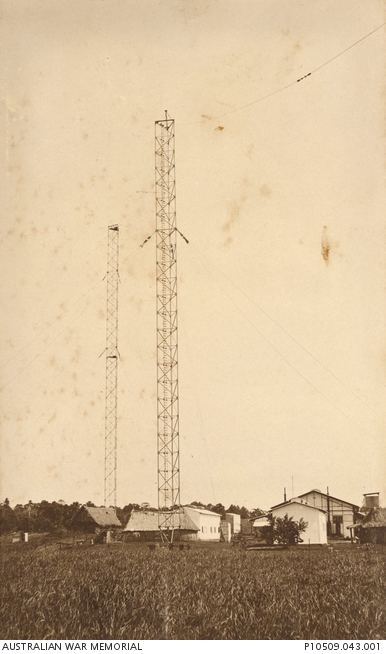 During the late 1800s and early 1900s the Germans established a network of powerful wireless and telegraph stations in the south-west Pacific. These stations enabled them to communicate quickly with Germany and with German ships in the region. When Britain declared war on Germany, Australia was asked to destroy the radio stations and to occupy German New Guinea and the surrounding areas.

A special force was to be raised for this task. Recruiting for the Australian Naval and Military Expeditionary Force (ANMEF) began on 10 August 1914. Less than ten days later Colonel William Holmes DSO had recruited, equipped, and embarked a 1,000-strong infantry battalion and 500 naval reservists and ex-seamen. The naval reservists were drawn from Queensland, New South Wales, Victoria, and South Australia. Due to the urgency of organising the force, the military component was enlisted only from New South Wales.

As well as the infantry battalion and naval brigade, the force included two machine-gun sections, a signals section, and a medical section. An additional militia battalion from north Queensland was to join the force at Port Moresby. The ANMEF left Sydney on 19 August aboard HMAT Berrima escorted by HMAS Sydney.

While the ANMEF was training at Palm Island, near Townsville, Berrima was joined by the stores ship Aorangi and HMAS Encounter. Submarines AE1 and AE2 joined the convoy on the way to Port Moresby, where it was met by HMAS Warrego and Yarra and the requisitioned liner Kanowna (which was sent home shortly afterward following an on-board mutiny by the ship's stokers and did not take part in any action). The convoy rendezvoused with HMAS Australia at Rossel Island before continuing on to Rabaul.

On the morning of 11 September 1914, a party of 25 naval reservists landed at Kabakaul. Their orders were to destroy the radio tower at Bita Paka, seven kilometres inland. The men met some resistance from German soldiers and New Guinea troops, but with the support of reinforcements the force captured the radio station by 7 pm that evening.

As a result of the action, six Australians from the ANMEF were killed or died of wounds, and another four were wounded. One German was killed and one wounded. New Guinea troops suffered 41 casualties, with 30 killed and 11 wounded. RAN Reserve Officer Lieutenant Bond was awarded a Distinguished Service Order for his action in disarming eight Germans and causing the surrender of 20 New Guineans.

The following day the naval reservists marched from Kabakaul to Herbertshöhe, while Berrima landed a garrison at Rabaul.

Colonel Pethebridge took over as administrator on 8 January 1915. The ANMEF was relieved of its administrative responsibilities by the Tropical Force and the men began to leave New Guinea the next day.