A hundred years on: the Australian Naval and Military Expeditionary Force (AN&MEF)

On 6 August 1914, shortly after the outbreak of the First World War, Australia agreed to a request by the British government to seize German wireless stations in the south-west Pacific, namely German New Guinea. Australia was also required to occupy the territory under the British flag and establish a military administration. For the first time, Britain called upon Australia to train, supply and command her own forces in defence of the empire. Consequently, the Australian Naval and Military Expeditionary Force (AN&MEF) was born. 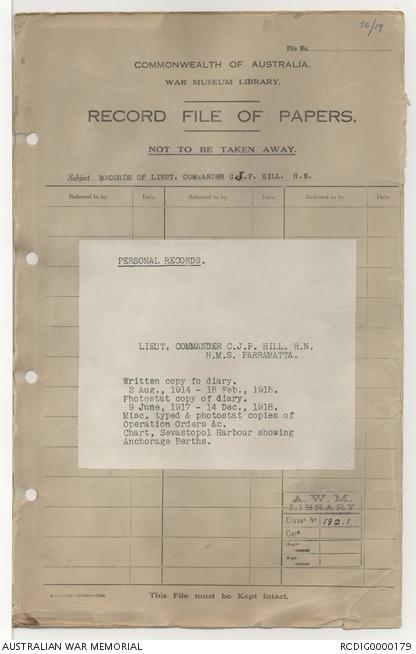 Just over a month later, at dawn on 11 September 1914, fifteen hundred men and almost the entire Australian fleet arrived off Rabaul in German New Guinea. Only several days before, the men had been told where they were heading and their objectives once they had arrived there. Captain Brian Pockley, a medical officer with the Australian Army Medical Corps (AAMC), had written to his family:

“Our objective is 2 wireless stations close to Herbertshöhe. One 4 miles away & the other about 7 or 8. We are not even certain that they exist & much doubt if they are defended. However we shall see to-morrow.”
- Letter from Captain Brian C. A. Pockley to his family whilst aboard H.M.A.S. Sydney, 10 September 1914

In the early hours of 11 September 1914, two parties of 25 naval reservists went ashore at the settlements of Herbertshöhe and Kabakaul. The party that landed at Kabakaul, consisting of an officer (Lieutenant R. G. Bowen, RAN), a military doctor (Pockley) and 25 naval reservists was tasked with capturing the wireless station at Bitapaka about seven kilometres inland.

Contrary to expectation, the group encountered significant resistance from German and native forces as it progressed towards the wireless station. As Lieutenant Commander C. J. P. Hill of H.M.A.S. Parramatta wrote:

“Found road to wireless station mined & enemy entrenched at intervals all up the road. Enemy evidentially expected troops to land & march up the road to wireless station. Scouts got in touch with enemy almost at once on landing & made signals reinforcements finding they were up against companies of native police with German officers & NCO & most of residents of Herbertshöhe. Destroyers which were lying close inshore at once landed almost their entire ships companies & took to the jungle, worked round the trenches along the road & managed to clear the enemy out. Meanwhile Australia and Berrima arrived & landed a company of troops. Wireless station taken about sunset.”
- Diary of Lieutenant Commander C. J. P. Hill, 11 September 1914

Six Australians had been killed and four wounded in the fighting for the Bitapaka wireless station. Enemy losses amounted to three Germans and about 30 New Guineans killed. Among the Australians killed were Captain Pockley and Able Seaman W.G.V. Williams. They became two of the first Australians to be killed in the First World War. In a letter to his mother a week later, Private Dennis Gurney Broad wrote of Pockley's death: “Unfortunately our best doctor was shot. We took him on board the Berrima but he didn’t last half an hour…”

At nightfall on 12 September the main infantry battalion was landed at Rabaul to capture the town and the surrounding settlements. Rear Admiral George Edwin Patey, serving as commander-in-chief of the Australian fleet, sent a letter to his sister the following day writing: “We have now taken Rabaul and Herbertshöhe without opposition…” On that same day Private John Axtens wrote in his diary: “Proclamation read & flag hoisted at Rabaul.” 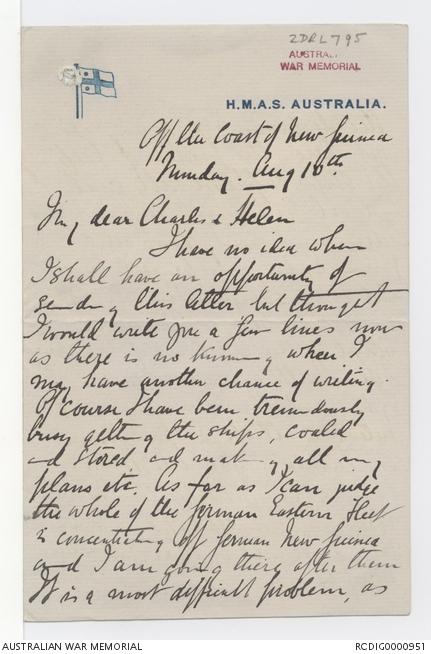 Letter from George Edwin Patey to his sister Helen, 13 September 1914.

On 17 September terms had been reached and all military resistance ended. With German New Guinea under Australian control and the German East Asia Squadron having fled towards the Americas, the German threat in the region had ceased. The operation was not without loss however. Along with the losses sustained on 11 September, the Australian submarine AE1, which had been part of the naval component of the AN&MEF, was lost at sea on 14 September while patrolling with H.M.A.S. Parramatta. Charles Suckling, a submariner on her sister submarine AE2, wrote:

“Australia’s first completed submarine had proved Australia’s first war ship to be lost. In her had died three skilful officers, and thirty two specially selected and trained ratings. To us, their companions and jesting rivals over many a mile of sea; who were also losing, in many cases, friends of long years standing; our loss was a loss indeed.”
- Memoir of Charles Suckling

Within a few weeks most of the German territories in the area, including Bougainville and the Admiralty Islands, had been occupied without further opposition. Private Broad who remained at Rabaul as part of the garrison there wrote to his mother several weeks later: “I expect the jolly war will be over in a few months…”

Unfortunately, the war was only just beginning. 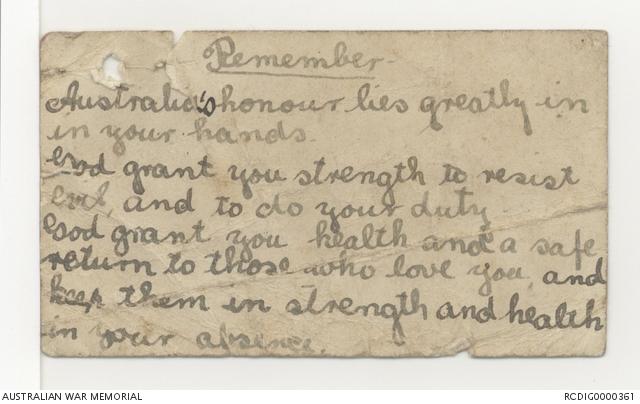 To commemorate the service of the Australian Naval and Military Expeditionary Force (AN&MEF) the Australian War Memorial has digitised and put online a series of private and official records that help tell the story of the AN&MEF. These include the collections referred to above, as well as many others. These collections can be found on the Memorial's website.  In addition, the nominal roll that lists all those who served as part of the military component of the AN&MEF can be viewed on the Memorial's website. 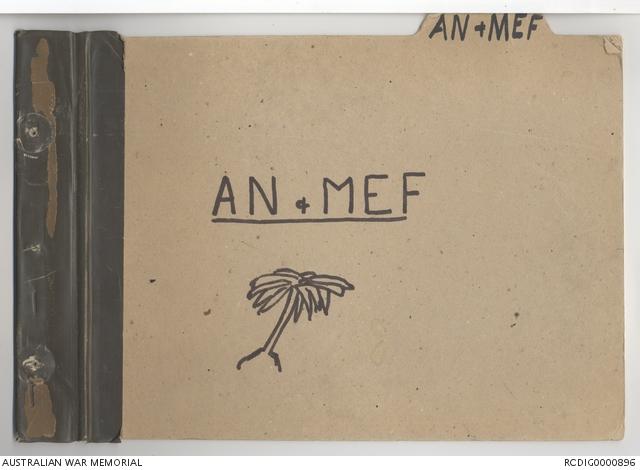