Note on terminology:
Peace support operations are often divided into "peacekeeping" (lightly armed) and "peace enforcement" (heavily armed), and sometimes into other categories as well. In this section, "peacekeeping" and "peacekeeping operation" are used as blanket terms to cover all impartial, multinational, military-based interventions into areas of conflict.

Australia has had peacekeepers in the field with the United Nations since 1947. In Indonesia in 1947, Australians were part of the very first group of UN military observers anywhere in the world, and were, in fact, the first into the field.

In the early years, Australia's peacekeepers were generally unarmed military observers, promoting peace indirectly by ensuring that neither side in a conflict could violate a ceasefire or commit atrocities without the United Nations and the world community knowing about it. Today the media can fill a similar role, but military observers with a peacekeeping operation are more impartial and can use their military training to assess a situation more accurately.

In Indonesia, information from UN military observers ultimately helped the Indonesian republicans win their independence from the Dutch. In Korea in 1950, the UN's judgement that North Korea had invaded the south was based, in part, on a report by Australian military observers serving with the UN Commission on Korea. 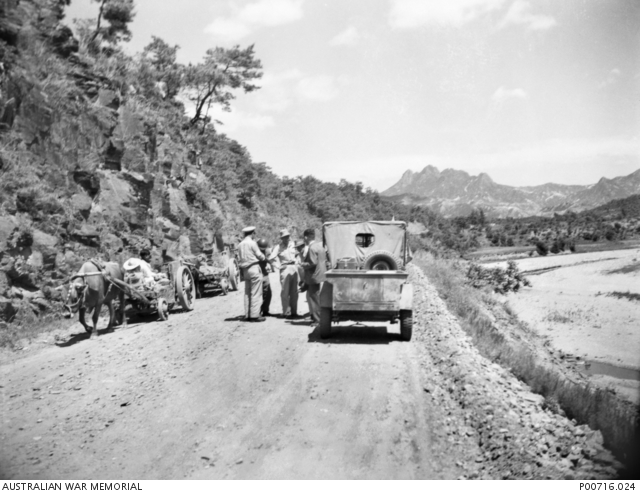 Korea, June 1950. Members of the United Nations Commission on Korea (UNCOK) passing native ox carts on the road while on tour of the 38th Parallel just prior to war breaking out.

More recently, when the Iran-Iraq war ended in 1988, Australian observers took part in a UN operation monitoring the ceasefire.

Peacekeeping has not only been the preserve of the Australian Defence Force. Since 1964, Australian police have served in Cyprus, an island wracked by conflict between its Greek and Turkish communities. Here, too, there is no sign of an end to the conflict, but the police help minimise its effects and build bridges between the communities. More recently, police officers from Australia have also served in places as widely separated as Cambodia, Haiti, Mozambique, Bougainville and Timor. 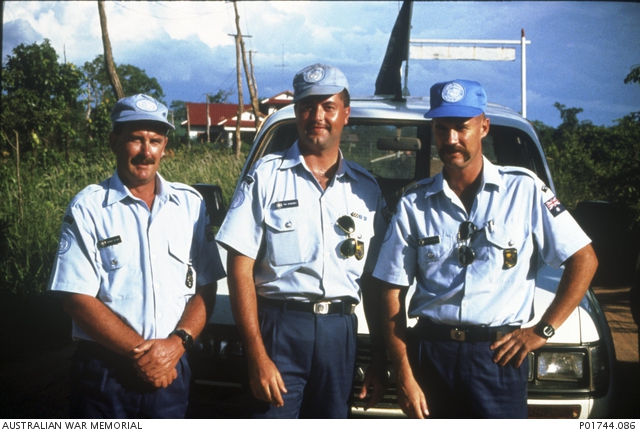 Three police officers serving with the United Nations Transitional Authority in Cambodia (UNTAC). Their role was to help maintain order before and during the national elections. The men are all wearing blue United Nations (UN) caps.

Since the 1970s, Australia's contributions to peacekeeping operations have increased in size and scope. In that decade, and again in the 1980s, RAAF helicopters operated in the Sinai, as Egypt and Israel ended three decades of hostilities. At the end of the 1970s, an Australian infantry force of 150 soldiers took part in a British Commonwealth operation as Zimbabwe won its independence. A decade later, an even larger contingent, composed largely of engineers, assisted a UN operation with a similar role in Namibia.

Peacekeeping in the 1990s

With the end of the Cold War, the 1990s proved to be the busiest decade in the history of multinational peacekeeping. For the first time, RAN ships took part in a peacekeeping operation, enforcing UN-imposed sanctions against Iraq both before and after the Gulf War.

For a period in 1993, Australia had over 2,000 peacekeepers in the field, with large contingents in Cambodia and Somalia. In Cambodia, Australia had taken a leading diplomatic role in the search for a settlement to factional strife in a country still suffering the effects of the genocidal Pol Pot regime of the 1970s. The Australian contribution to the resulting UN operation included the force commander and the operation's communications component. In Somalia, where the international effort resulted largely in failure, a battalion-level Australian contingent was nevertheless successful in allowing the delivery of humanitarian aid in the Baidoa area.

A year later, Australians were in Rwanda, another country to fall victim to genocidal civil violence. This time, the Australian contingent centred on medical staff who were able to treat many of the local people, in addition to members of the UN force.

After this there was a lull in Australian peacekeeping, though long-running operations continued in the Middle East and Cyprus and Australians were still involved with Iraq, inspecting weapons-manufacturing facilities and policing sanctions.

Since 1997, however, Australians have also served on Bougainville, where a settlement at last appears possible in the long-running conflict between the Papua New Guinea government and the separatist Bougainville Revolutionary Army.

Then in 1999, Australia led a peace enforcement operation which dwarfed all its previous peacekeeping efforts, as East Timor achieved independence from Indonesia.

The Portuguese colony of East Timor was invaded by Indonesia in 1975. After almost a quarter-century of bloodshed in the territory, a new Indonesian government under President Habibie agreed to allow the East Timorese to vote on their future. A UN operation - the United Nations Mission in East Timor (UNAMET) - was established to organize and conduct the vote, which was held at the end of August 1999 and resulted in an overwhelming vote in favour of independence.

Tragically, once the result had been announced, pro-Indonesian militias, sometimes with the support of elements of the Indonesian security forces, launched a campaign of violence, looting and arson throughout the entire territory. Many East Timorese were killed, and as many as 500,000 were displaced from their homes, about half leaving the territory, in some cases under threat of violence. 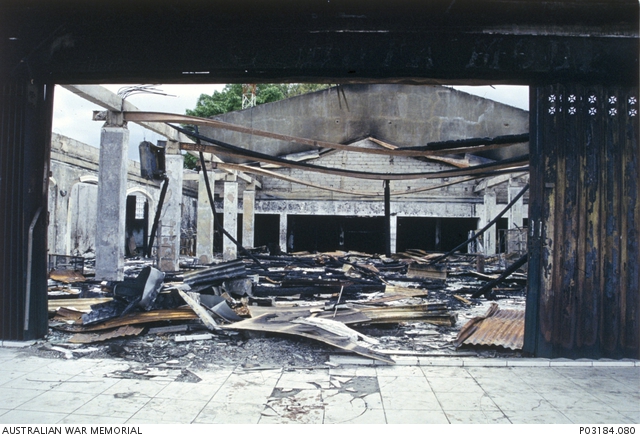 Dili, East Timor, 13 November 1999. A destroyed building in the International Force East Timor (Interfet) compound. Note the blood stains on the footpath in front of the building.

Eventually, as the violence remained uncontrolled, Indonesia agreed to the deployment of a multinational peacekeeping force. Australia, which had contributed police to UNAMET, organized and led the International Force East Timor (Interfet), a non-UN force operating in accordance with UN resolutions. Interfet, with the role of restoring peace and security, protecting and supporting UNAMET, and facilitating humanitarian assistance operations, began arriving on 12 September 1999. Australia contributed over 5,500 personnel and the force commander, Major General Peter Cosgrove.

With the withdrawal of the Indonesian armed forces, police and administrative officials from East Timor, UNAMET re-established its headquarters in Dili on 28 September. On 19 October 1999, Indonesia formally recognised the result of the referendum. Shortly thereafter, the United Nations Transitional Administration in East Timor (UNTAET) was established as an integrated, multi-dimensional peacekeeping operation, fully responsible for the administration of East Timor during its transition to independence. The hand-over of command of military operations from Interfet to UNTAET was completed on 28 February 2000. Australia has continued to support the UN peacekeeping operation with between 1,500 and 2,000 personnel, as well as landing craft and Blackhawk helicopters. Australia remains the largest contributor of personnel to the peacekeeping mission. 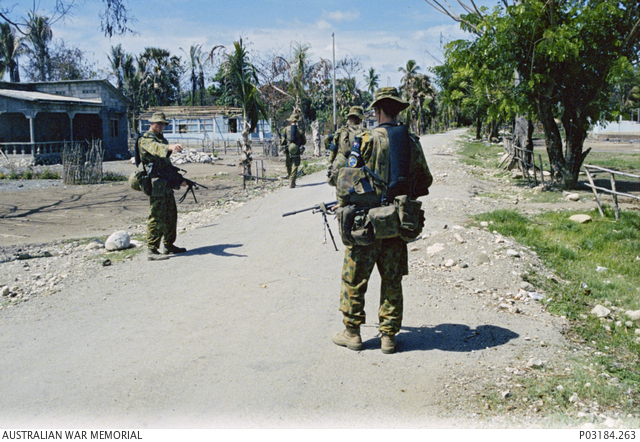 Suai, East Timor, 16 November 1999. Gunner (Gnr) Alan Paul (left) of the 108th Battery, Field Regiment, part of the International Force East Timor (Interfet), talking to a fellow soldier as they begin a patrol of an area between Suai and Matai.

The following Australians have died on peacekeeping operations (* police):

Correct as at September 2017

Information on police deaths as advised by the Australian Federal Police.