The acronym was first written as “A & NZ Army Corps”. However, clerks in the corps headquarters soon shortened it to ANZAC as a convenient telegraphic code name for addressing telegram messages.

One of the earliest appearances of “Anzac” as a word in an official document was an appendix to the 1st Australian Division War Diary, dated 24 April 1915. 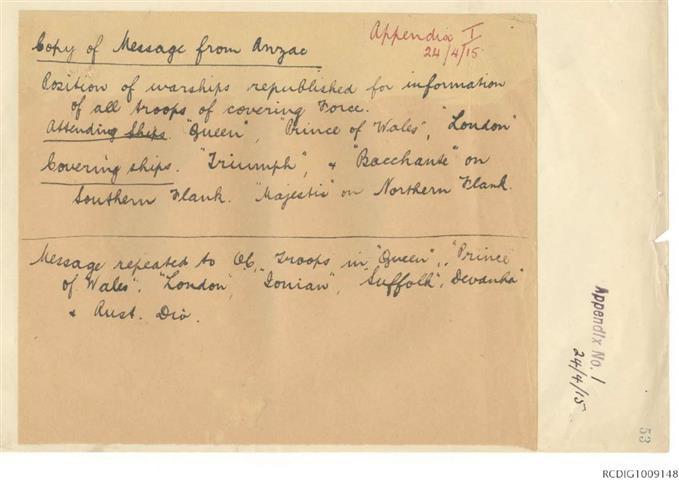 After the Australians and New Zealanders had landed on Gallipoli General Sir William R. Birdwood was asked to suggest a name for the beach where the landing took place. According to his introduction in The Anzac book (1916), Birdwood “asked that this might be recorded as ‘Anzac Cove’ - a name which the bravery of our men has now made historical, while it remains a geographical landmark for all time”. The area of the landing was often simply referred to as “Anzac”.

Soon after, “Anzac” was used to refer to the men themselves. At first an Anzac was a man who was at the landing and who fought on Gallipoli. Later it was used for any Australian or New Zealand soldier of the First World War. After Gallipoli, men who had served there wore a brass “A” on their colour patch to distinguish themselves as veterans of the campaign. 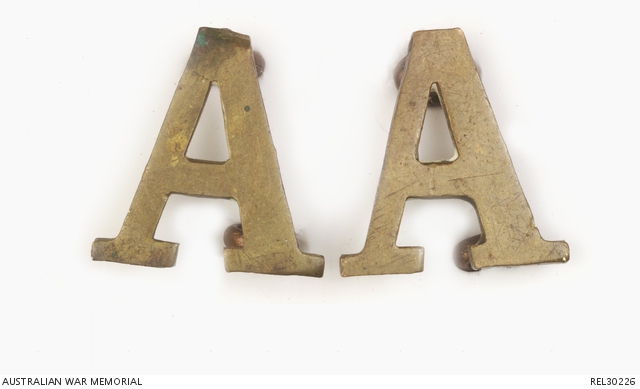 By the end of the First World War “Anzac” was well known throughout the British Empire and much of the rest of the world. In August 1915 The Times (London) declared that “the whole Italian Press praises the valour of the Australasian troops in the Dardanelles at Anzac”. The word “Anzac” also began appearing in the New York Times from August 1915. A letter to the editor on the origins of “Anzac” was published on 8 October 1916.

The word “Anzac” sometimes aroused extreme responses. An article published in the Sydney Morning Herald in April 1918 suggested that “new words are among the things that have been born of this war. And the greatest of them all is Anzac.”

The official war historian F.M. Cutlack described the word “Anzac” as a war cry, “pitiless as a hurled spear. It cuts like a sword. It rings like the final shout in the rush of a Zulu impi or a charge of Japanese bayonets. It conveys something savagely masculine, ruthless, resolute, clean driven home.”

Also in March 1916, the ANZAC Mounted Division was formed from three Australian Light Horse Brigades and the New Zealand Mounted Rifles Brigade for service in Sinai and Palestine.

In the Second World War, a new ANZAC was formed during the short Greek campaign of April 1941 when the 6th Australian Division and the New Zealand Division were joined under command of I ANZAC Headquarters (redesignated as ANZAC Corps).

A month after the Australian government committed the army to ground operations in Korea, New Zealand and Australian army chiefs discussed the formation of an ANZAC force for Korea. However, nothing came from the talks.

During the Vietnam War, two New Zealand infantry companies were attached to the 2nd, 4th, and 6th Battalions of the Royal Australian Regiment. They were designated 2RAR/NZ (ANZAC), 4RAR/NZ (ANZAC), and 6RAR/NZ (ANZAC).

Vietnam, October 1967. Troops of 2RAR/NZ (ANZAC) wait in open country for helicopters to give them a lift after Operation Ainslie. C313994 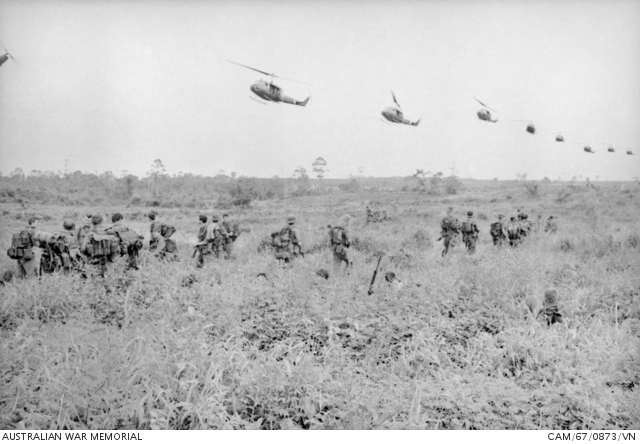