Three major battles occurred around El Alamein between July and November 1942, and were the turning point of the war in North Africa. The Australian 9th Division, led by Lieutenant General Leslie Morshead, played a key role in two of these battles, enhancing its reputation earned defending Tobruk during 1941.

The struggle for North Africa saw the pendulum swing sharply in favour of the Axis from January 1942. The Axis forces comprised German and Italian troops and were known as Panzerarmee Afrika, led by Field Marshal Erwin Rommel, “The Desert Fox”. Opposing him was the British Eighth Army commanded by General Claude Auchinleck. This army was mostly comprised of British, Australian, New Zealand, South African, and Indian troops. By the end of June, Rommel had forced the Allies back deep into Egypt, and the capture of Cairo and the Suez Canal seemed a very real possibility.

The Allies pinned all their hopes on their new defensive position near the tiny railway stop of El Alamein. Here, the battlefield narrowed between the coast and the impassable Qattara Depression. Rommel, wanting to maintain the pressure made another thrust on 1 July, hoping to dislodge Eighth Army from the Alamein position and open the way to Cairo and Suez. The Allies however had regrouped sufficiently to repulse the attack and make some counterattacks of their own. In these first days of July, the fate of the whole campaign hung in the balance. Both sides by now critically weakened and disorganised, missed opportunities for decisive victories. Both now took time over the next few days to reorganise and lick their wounds.

Before dawn on 10 July the 9th Division launched an attack on the northern flank and succeeded in taking the important high ground around Tel el Eisa. This caught Rommel off guard as he had concentrated his forces for his own offensive in the south. The Australians spent the next few days fighting off heavy counterattacks as Rommel redirected much of his forces against them. The 9th Division infantry owed much to Australian, British and South African artillery, as well as the Desert Air Force (DAF), in repelling these counterattacks. Australians were also present in the DAF, flying with of Nos. 3 and 450 Squadrons, RAAF. Allied infantrymen had varying opinions regarding armoured support, feeling that sometimes the tanks provided welcome support and protection, but also that sometimes they failed them completely.

Fighting then spread to other parts of the front and continued for most of July. By the end of the month, both sides had fought each other to a standstill. On the 27th, one Australian Battalion, the 2/28th, was virtually wiped out when they were surrounded by German tanks and help failed to arrive in time (see Remembering 1942, “Ruin Ridge”).

When the fighting died down at the end of July, Eighth Army, despite its severe losses, could take some comfort knowing that it had stopped Rommel’s drive into Egypt and now held the important high ground near the coast. This provided good observation of the enemy and an excellent position from which to launch further offensives.

From August until the end of October, the Allied army grew steadily in strength with the arrival of more troops and equipment. The Axis forces, on the other hand, were weakening, with their supply lines strangled by Allied air and naval attacks. A change in command of the Eighth Army occurred in mid-August when Auchinleck was replaced by Lieutenant General Bernard Montgomery. “Monty” – as he was universally known – set about making positive changes in the Eighth Army, training it and preparing it for the battles to come.

On the last day of August Rommel launched another offensive. In this last and desperate attempt to oust the Allies from the Alamein line, German and Italian armoured forces massed in the southern sector and made a sweeping hook that drove the Allies back to the Alam el Halfa Ridge. The Allied strength, however, soon proved itself as they pushed the Axis forces back over the next few days. In addition, they faced incessant Allied bombing from the DAF, an acute shortage of petrol for their tanks, and a diversionary raid by Australians in the north. After this battle, Rommel went on the defensive, and prepared for the Allied offensive he knew would soon come.

On the night of 23 October 1942, a massive artillery barrage heralded the great Allied offensive. The infantry successfully captured most of their objectives; however, the tanks were unable to follow through and continue the thrust. With the Axis forces stubbornly holding their lines intact, Montgomery worried that his offensive was becoming bogged down. Changing tactics from the drive westwards, he ordered the Australians of 9th Division to switch their attack northward. What followed was a week of extremely fierce fighting, with the Australians grinding their way forward over well-defended enemy positions. As had happened in July, their gains so worried Rommel that he again diverted his strongest units to stop them. Places such as Thompson’s Post, the Fig Orchard, the Blockhouse and the Saucer became an inferno of fire and steel as the Australians weathered the storm of bombs, shells and bullets.

With Rommel’s attention firmly on the Australians in the north, naturally this left his line weakened further south, and on 2 November the British tanks struck a decisive blow there. The Panzerarmee had suffered crippling losses and Rommel was forced to order a general withdrawal, or face total annihilation. His army now began a headlong retreat that would soon see them ejected from Africa altogether.

Between July and November 1942, the Australian 9th Division suffered almost 5,500 casualties. Although the price was fearfully high, they had without doubt played a crucial role in ensuring an Allied victory in North Africa. 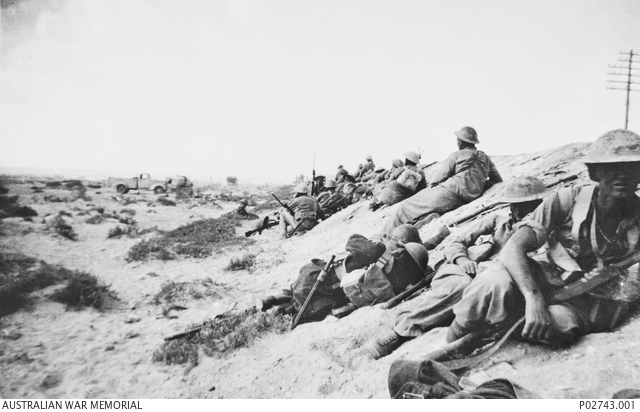 Men of the 2/3rd Australian Pioneer Battalion behind the railway embankment near the Blockhouse. In such flat, open terrain, taking cover usually meant scraping shallow holes out of the sometimes hard and rocky ground. 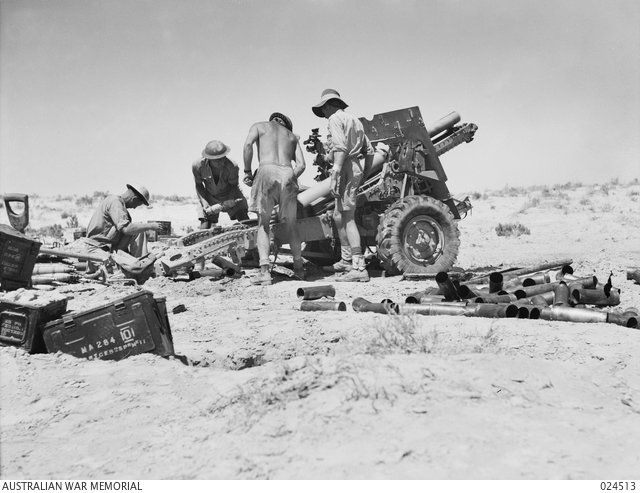 Gunners of 2/8th Australian Field Regiment firing a 25-pounder during the July battle. Artillery was used at El Alamein on a massive scale, supporting the infantry when they went forward, and protecting them when they were counterattacked. 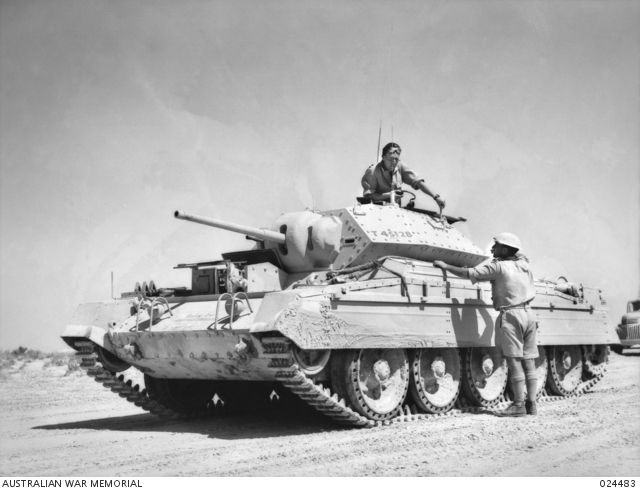 A Crusader tank of the Australian 9th Division Cavalry Regiment. Most Allied armoured formations in North Africa were British, and they were the ones who usually bore the brunt of Rommel’s panzer attacks. 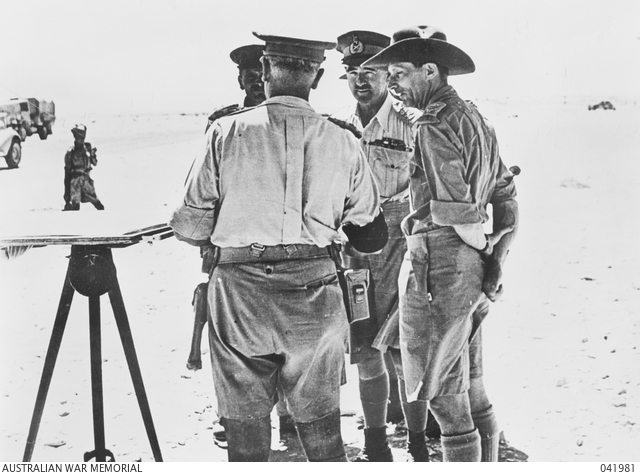