In recruitment for the Third New South Wales Mounted Rifles, which was representative of other Australian units, preference was given to trained men who were good shots and good riders. They were to be 20 to 40 years old, 5 feet 6 inches or upwards in height, and have a minimum chest measurement of 34 inches. Applicants were required to be single men and to pass a military medical examination.

During the course of the First World War standards for age, minimum height and minimum chest measurement for enlistment in the AIF were altered.

The requirements in August 1914 were 19–38 years, height of 5ft 6in and chest measurement of 34 inches. In June 1915 the age range and minimum height requirements were changed to 18–45 years and 5ft 2in, with the minimum height being lowered again to 5ft in April 1917. During the first year of the war approximately 33 percent of all volunteers were rejected. However, with relaxation of physical standards of age and height, as well as dental and ophthalmic fitness, previously ineligible men were now eligible for enlistment.

On enlistment recruits were examined for BC or D tattooed on their skin. These were British army tattoos. BC stood for bad character and D for deserter.

The health of men recruited under the new standard was of great concern to commanding officers.

The second volume of the Official History of the Australian Army Medical Services in the War of 1914—1918 by Colonel AG Butler contains the following:

"I am trying to arrange transport for two or three thousand "B" class men; they are absolutely unfit for service. Many of them do not disclose any organic disease upon a carefully conducted clinical examination, but are in and out of hospital, and are quite useless for front line, and practically useless for Home Service….Far better no reinforcements be sent from Australia as they do no duty, and only cause congestion in our hospitals and Command Depots. The class of reinforcements you are sending are not up to the old standard. Headquarters AIF Depots report that 20 per cent are unfit for the front line".

Butler in the footnote writes:

"Not unnaturally, seeing that the height standard had been reduced from 5ft 4 in. to 5ft 2in. the standard of vision reduced, and men with minor defects accepted. For special units additional lowering had been approved. Thus men for railway sections and mining corps were accepted up to 50 years, and men with spectacles were allowed to enter the ASC, AMC and ordnance corps. Men with minor and curable conditions suitable for operation could be taken into a military hospital for treatment. The conditions under which treatment was given was that if the operation was successful the man forthwith enlisted for general service, if not successful agreed to be discharged and had no further claim for compensation or pension. (So many men pleaded disability, as a results of such operations, and were subsequently discharged, that this method was abandoned)".

The age limits set for enlistment in the Second Australian Imperial Force (AIF) in 1939 were 20 to 35 for recruits, higher for officers and some NCOs. The maximum was raised to 40 in 1940, and the minimum lowered to 19 in 1941, and 18 in 1943; written parental consent was required for anyone under the age of 21. Even when the limit was lowered to 18, men of that age were not permitted to go to New Guinea or the Northern Territory. The same restriction also applied in the Citizen Military Forces (CMF), although the 18 year lower limit existed earlier. From 1942, the CMF also shared with the AIF a requirement that all recruits under the age of 20 on enlistment undergo six months training before being posted to a unit. The CMF upper age limit was 60.

Second Echelon, A.H.Q., examined the records of more than 25,000 men of the army with the object of discovering their average height, weight and chest measurement on enlistment. It found that the averages for men who were 21, for example, on enlistment were: height, 5 feet 7.6 inches; weight, 147 pounds; chest, 36.8 inches. The average height for various age-groups ranged from 5 feet 7 inches to 5 feet 8.4 inches (the latter for a relatively small sampling of men aged 44).

Also, the Government enlarged the field of enlistment (June 1940) by raising the upper age limit to 40 and reducing the height to 5 feet. In 1939 the mimimum limit had been 5 feet 6 inches. In the previous war the minimum, originally 5 feet 6 inches, had been reduced inch by inch until, in April 1917, it reached 5 feet. 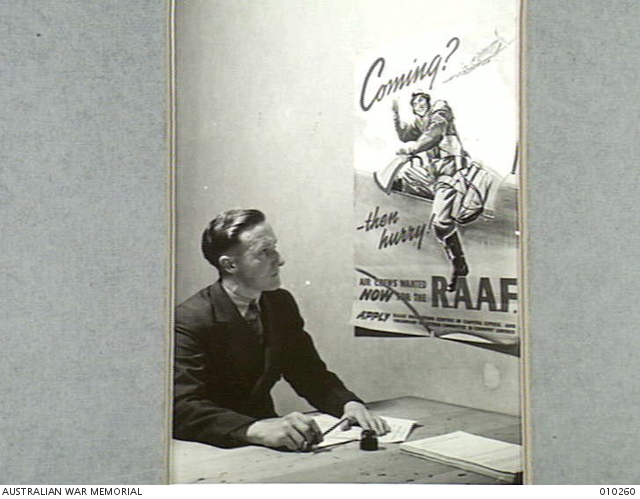