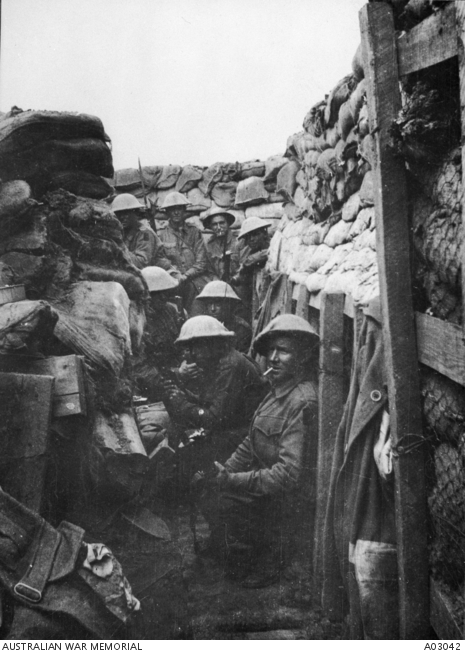 Men of the 53rd Battalion waiting to don their equipment for the attack at Fromelles. Only three of the men shown here came out of the action alive, and those three were wounded. C612

The battle of Fromelles on 19 July 1916 was a bloody initiation for Australian soldiers to warfare on the Western Front. Soldiers of the newly arrived 5th Australian Division, together with the British 61st Division, were ordered to attack strongly fortified German front line positions near the Aubers Ridge in French Flanders. The attack was intended as a feint to hold German reserves from moving south to the Somme where a large Allied offensive had begun on 1 July. The feint was a disastrous failure. Australian and British soldiers assaulted over open ground in broad daylight and under direct observation and heavy fire from the German lines. Over 5,500 Australians became casualties. Almost 2,000 of them were killed in action or died of wounds and some 400 were captured. This is believed to be the greatest loss by a single division in 24 hours during the entire First World War. Some consider Fromelles the most tragic event in Australia’s history.

Over two years after the battle, on the day of the Armistice of 11 November 1918 when the guns of the Western Front finally ceased firing, Australian official war correspondent, Charles Bean, wandered over the battlefield of Fromelles and observed the grisly aftermath of the battle: “We found the old No-Man’s-Land simply full of our dead”, he recorded, “the skulls and bones and torn uniforms were lying about everywhere”. Soon after the war these remains were gathered to construct VC Corner Cemetery, the only solely Australian war cemetery in France. It is also the only cemetery without headstones. There are no epitaphs to individual soldiers, simply a stone wall inscribed with the names of 1,299 Australians who died in battle nearby and who have no known graves. The unidentified remains of 410 are buried in mass graves under two grass plots in the cemetery.

For nearly 80 years this sombre monument remained the only conspicuous reminder of the tragic events of Fromelles until, in July 1998, a new Australian Memorial Park was dedicated there. Situated close to VC Corner Cemetery on a part of the old German front line which was briefly captured and held overnight by the 14th Australian Brigade on 19/20 July, the park includes the stark remains of four German block-houses. A bronze statue, titled ‘Cobbers’, by Australian sculptor Peter Corlett, depicts Sergeant Simon Fraser of the 57th Battalion in an enduring image of the aftermath of the battle, the rescue of the wounded.

Until recent years, 1,335 Australian soldiers remained ‘missing’ from the Fromelles battle, having no known grave. Then in 2007, following persistent research by retired Melbourne teacher, Lambis Englezos, archaeological investigations began to uncover the remains of some 200 Australian and 50 British soldiers who were buried in a mass grave at Pheasant Wood by German troops in 1916. Between 30 January and 19 February 2010, the remains of 249 soldiers were reinterred with full military honours in Fromelles (Pheasant Wood) Military Cemetery, newly constructed by the Commonwealth War Graves Commission. Over 90 Australian soldiers were identified by name and more may still be identified.

On 19 July 2010, the 94th anniversary of the Battle of Fromelles, the last of 203 Australian soldiers recovered from the excavation were buried in a solemn ceremony with full military honours. Later that day, a private ceremony was held for families of identified soldiers to dedicate the named headstones within the cemetery.