Drip (or "pop off") rifles were self-firing rifles used at Gallipoli to deceive the Turks during the evacuation of December 1915.

Fire was maintained from the trenches after the withdrawal of the last men, by rifles arranged to fire automatically. This was done by a weight being released which pulled the trigger. Two kerosene tins were placed one above the other, the top one full of water and the bottom one with the trigger string attached to it, empty. At the last minute, small holes would be punched in the upper tin; water would trickle into the lower one, and the rifle would fire as soon as the lower tin had become sufficiently heavy.

Another device ran a string, holding back the trigger, through a candle, which slowly burnt down, severed the string, and released the trigger. 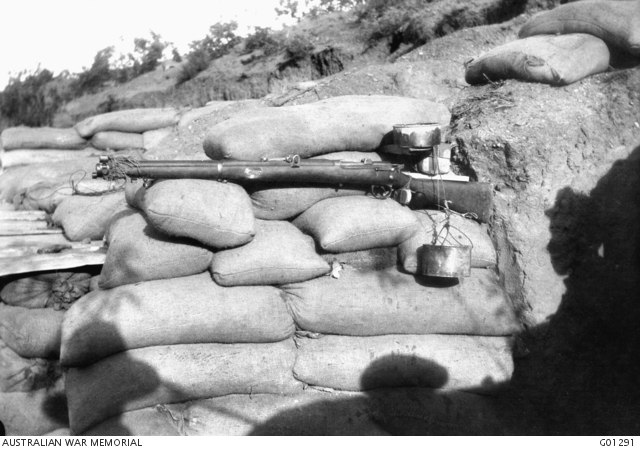 Such devices provided sporadic firing which helped convince the Turks that the Anzac front line was occupied long after thousands of men had crept down to the beaches and escaped. British generals estimated that half the force would be lost in any attempt to withdraw because the Turks could not fail to notice as the trenches were so close. In the event, the Turks were so deceived that 80,000 men were evacuated with only about half a dozen casualties.

The drip rifle was invented by Lance Corporal W. C. Scurry of the 7th Battalion, AIF, with assistance from Private A. H. Lawrence. For the part he played in making the evacuation a success, Scurry was mentioned in dispatches, awarded the Distinguished Conduct Medal, and promoted to sergeant.