On Gallipoli periscopes provided a less dangerous way of observing the Turks from the trenches. Looking over the parapet at Quinn's post, for example, was extremely hazardous as the enemy line was less than 50 metres away. The periscope rifle was invented in May 1915 by Lance Corporal William Beech, 2nd Battalion, a builder's foreman: this device allowed a soldier standing in a trench to take accurate aim and fire without exposing himself to the enemy.

The upper mirror of the periscope was so fixed that it looked along the sights of a rifle; this image was reflected in the lower mirror, into which the soldier peered. Sometimes the periscope rifle was used by a sniper and observer working together.

The rifles were produced in a makeshift workshop on the beach at Anzac Cove. Though less effective than conventional rifles, the periscope rifle proved to be a useful weapon, and it was soon in use in many front-line trenches, in particular at Quinn's Post, where the closeness of the opposing trenches had earlier made it virtually impossible to fire a shot by day. 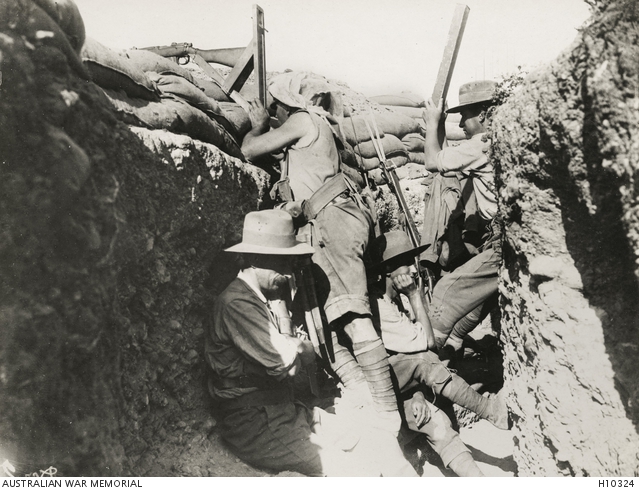 A sniper using a rifle with a periscopic sight while an observer checks the results with a trench periscope.  C318330