At dusk on the 26 April 1941, the Unit moved out from under the groves and down to the beach. Thick sand made the going very hard and slow. The Unit marched two miles along the beach to the stone jetty at Kalamata. On the way they passed thousands of troops lined up in column of route, quietly awaiting their turn for embarkation.

It seemed many hours before they were told to move up onto the jetty and embark on the next destroyers. The area was packed with thousands of troops, mainly L of C and administrative troops, British and Cypriot Pioneers, etc, Most of 16 and 17 Brigades had already embarked. All the troops in the area were a credit to their Units; not a sound was heard, not a sign of panic or trouble. As the destroyers came into the jetty like a taxi service, the troops filed quietly and quickly aboard carrying their gear and weapons.

It must have been about 0200 hours on the 27th April that they saw a destroyer race into the small bay another destroyer following closely astern. They slid swiftly alongside the jetty. Over the loud hailer the voice of the Skipper carried to the troops, "We leave in 5 minutes, hurry it up". It was just like the Sydney ferry service. The Unit was directed aboard the destroyer named the "Hereward".

The troops moved aboard via two wooden planks. All the time the Skipper was anxiously urging them to hurry. Finally when all troops were aboard and the destroyer was ready to move off, Eddie White appeared with his two vehicles with the Battalion's guns and instruments aboard. The gang planks were up and no one appeared to be making a move to get the stores aboard, so twenty men from HQ Company were ordered to jump off the ship to form a chain on the wharf and manhandle the guns and stores aboard. Most of the guns were aboard when the Skipper cast off and started to move. The men got back on board and John Hindmarsh directed the vehicles to the other destroyer and got the rest of the instruments and gear on board. It went back to Egypt with these stores.

The "Hereward" pulled out into the bay alongside a large Dutch ship, the SS "Costa Rica", which was boarded by means of climbing up rope ladders. It was no mean task to climb these ladders with full marching order plus a machine gun or tripod tucked under one arm. All guns and stores were carried up the ladders onto the deck of our new transport. Everyone was very tired and many needed considerable urging to get all the stores and guns up aboard the transport.

Many of the troops packed into cabins, others in the holds, others on deck. A small cabin was occupied by a number of 2/6 Battalion officers including their Padre, Father Saville, who had a huge water bottle full of rum which he proceeded to pass around for everyone to take a swig - a tonic for tired men. He was a fine chaplain and soldier.

At 0400 hours on the 27 April the "Costa Rica" set sail for Egypt accompanied by two other transports with HMS "Hero", "Hereward" and "Defender" as escort vessels.

8,000 troops were packed aboard the three transports and 250 personnel aboard the HMS Defender who also carried the Jugoslav crown jewels. No doubt all aboard slept like logs until dawn. At about 0800 hours the ship was dive bombed by Stukas, three bombs only just missed the ship, no doubt due to some good seamanship and a most effective barrage of small arms fire. The troops had Vickers guns, Brens, Boys anti-tank rifles, etc. mounted around the deck for anti-aircraft defence and every man used his rifle. The ship's crew had two Lewis guns for anti-aircraft but didn't know how to handle them, and needed showing some elementary gun drill and how to clear the easy numbers 1, 2 and 3 stoppages.

A short time later the ship was attacked by 22 Stukas and the men managed to shoot down two or three of them, which was a great morale booster to the troops. At 1210 hours yet another attack took place. The troops put up a barrage of fire and shot down yet another bomber. The bombs fell further away this time. Soon after the "All clear" was signalled at 1500 hours a plane came diving out of the sun with its engine switched off. The troops opened fire but it was too late, the bomb was on its way. It burst under the stern, blowing in the plates and flooding the engine room with water and the ship stopped.

The attacking plane burst into flames and crashed into the sea some distance from the "Costa Rica". The belts and magazines full of explosive and incendiaries that had been collected at Braillos paid off. The Navy signalled well done. One of the ship's crew came up on deck, calling out, "The ships sinking, everyone for himself". A few of the bright sparks, ex life savers etc, thought they would go for a swim, dived overboard and commenced to swim to a destroyer half a mile away, which then had to lower boats and pick them up, leaving itself open to air attack and slowing up the rescue of troops aboard.

Any further efforts to go over the side were stopped and the troops told it was obvious the ship was only settling slowly, and to wait until the destroyers came alongside. Everyone was calm and well disciplined and kept in ranks on deck; the ship's boats that were undamaged were lowered and lead by Major C. Fidock. The troops filed aboard and pulled away to the destroyer escort where they were picked up.

All personnel were off the "Costa Rica" and aboard the destroyers without a casualty, a remarkable performance and another feather in the cap for the Royal Navy. Fortunately the swell was not very great and the transfer of troops was effected without difficulty. Horrie, the Wog Dog, a Company mascot, was wounded by a small piece of shrapnel, which moody extracted with a pocket knife, then carried him to safety aboard the "Defender".

They were packed in and all over the destroyer. The crew did their best to look after the troops and plied them with hot chocolate etc. The destroyers headed for Crete with the survivors of the "Costa Rica" which incidentally at this time was listing badly and was settling deep in the water.

The destroyers were so heavily weighted down with troops that the gunwales only appeared a foot or so above the water and as they zig zagged to avoid attacking bombers on the way to Crete, the water washed over part of the deck. They travelled at close to 30 knots on the way to Crete but it was a satisfying experience aboard these speedy little vessels.

Soon after arriving at Suda Bay, Crete, at 1745 hours whilst preparing to disembark, German bombers attacked. Little time was wasted getting shore where a guard was mounted on some of the guns and gear salvaged from the "Costa Rica". Unfortunately most of the Vickers guns had been lost.

Many of the troops were in need of clothing replacements, overcoats and in some cases, boots. Most personal equipment was lost. The Greek campaign was a disaster. In addition to the vast quantities of stores and vehicles that were lost, hundreds of men (British, Australian and New Zealand) were killed, over a thousand wounded and thousands taken prisoners of war. 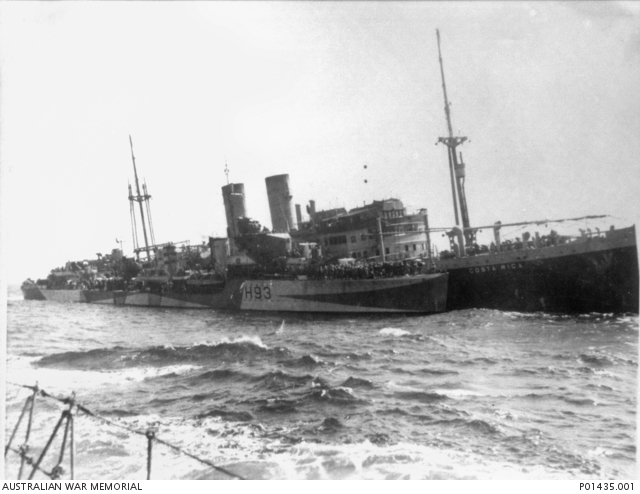