Walers were the type of horse used by light horsemen in the campaign in the Middle East during the First World War. The light horse combined the mobility of cavalry with the fighting skills of infantry. They fought dismounted, with rifles and bayonets. However, sometimes they charged on horseback, notably at Magdhaba and Beersheba. The smallest unit of a light horse regiment was the four-man section: one holding the horses while the other three fought.

The horses were called Walers because, although they came from all parts of Australia, they were originally sold through New South Wales. They were sturdy, hardy horses, able to travel long distances in hot weather with little water.

Horses usually need to drink about 30 litres of water a day. However, during the campaign they often went for up to 60 hours without water, while carrying a load of almost 130 kilograms, comprising rider, saddle, equipment, food, and water.

At the end of the First World War Australians had 13,000 surplus horses which could not be returned home for quarantine reasons. Of these, 11,000 were sold, the majority as remounts for the British Army in India (as was the case with this horse) and two thousand were cast for age or infirmity. 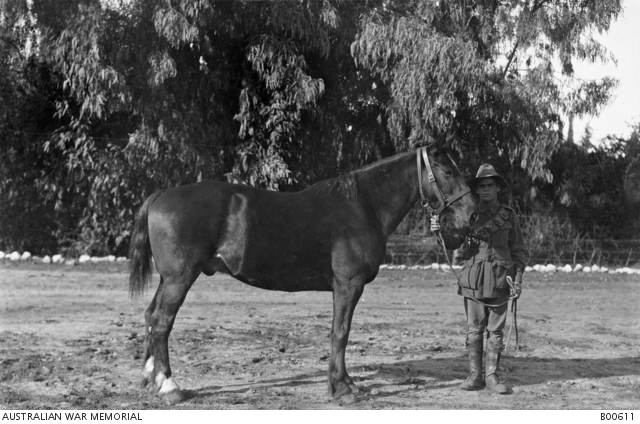 A typical Waler of the ANZAC Mounted Division.  C952733