The only horse to return from the First World War

In the First World War 136,000 “walers” (the general name applied to Australian horses abroad) were sent overseas for use by the Australian Imperial Force and the British and Indian governments. One horse from the 136,000 made it back to Australia.

From 1 August 1915 Sandy was in the care of Captain Leslie Whitfield, an Australian Army Veterinary Corps officer in Egypt. Sandy remained in Egypt until he and Whitfield were transferred to France during March 1916.

In October 1917 Senator George Pearce, Minister for Defence, called for Sandy to be returned to Australia for pasture at Duntroon. In May 1918 the horse was sent from the Australian Veterinary Hospital at Calais to the Remount Depot at Swaythling in England. He was accompanied by Private Archibald Jordon, who had been at the hospital since April 1917 and classed as permanently unfit for further active service.

After three months of veterinary observation, Sandy was declared free of disease. In September 1918 he was boarded on the freighter Booral, sailing from Liverpool and arriving in Melbourne in November. Sandy was turned out to graze at the Central Remount Depot at Maribyrnong.

Sandy saw out the rest of his days at the Remount Depot. Although he was originally intended to go to Duntroon, his increasing blindness and debility prompted the decision to have him put down, “as a humane action”, in May 1923. His head and neck were mounted and became part of the Memorial's collection. Sandy was displayed for many years, although is currently not on exhibition owing to deterioration through age. 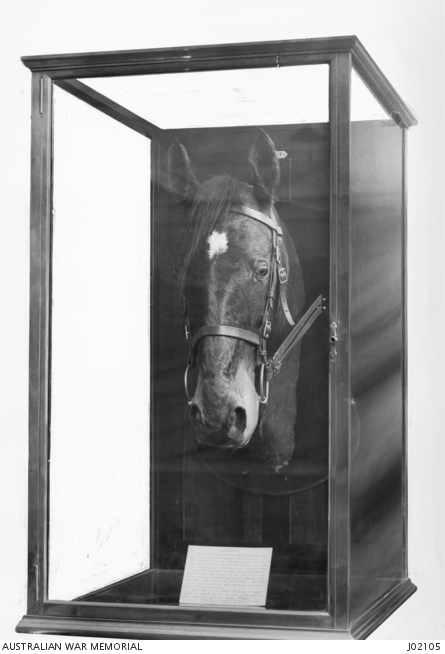