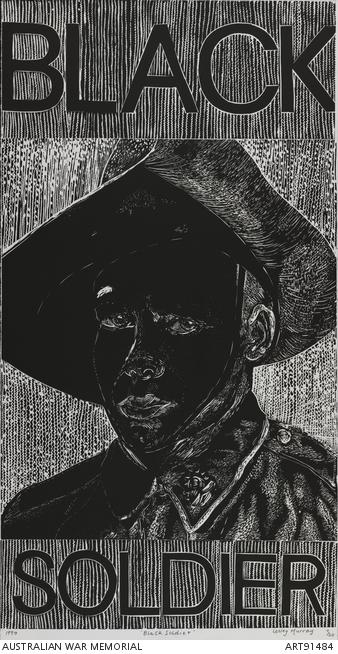 Black soldier depicts Lesley Murray's grandfather. Based on a photograph taken during the Second World War, this is a private work of commemoration. It is also intended to serve as a tribute to all Aboriginal and Torres Strait Islander soldiers who served in the Second World War but who may not have received recognition.  C965256, Australian War Memorial licensed copyright.

Aboriginal and Torres Strait Islander people have served in every conflict and commitment involving Australian defence contingents since Federation, including both world wars and the intervals of peace since the Second World War.

Little was known publicly about the presence of Indigenous men and women in Australia’s armed forces prior to the 1970s. Subsequent research has established a record of Indigenous service dating back to the start of the Commonwealth era in 1901, and even a small number of individual enlistments in the colonial defence forces before that.

It is impossible to determine the exact number of Indigenous individuals who participated in each conflict, and this research is ongoing. New names are constantly emerging, while some have been removed after research identified them as non-Indigenous.

Before 1980, individuals enlisting in the defence forces were not asked whether or not they were of an Indigenous background. While service records sometimes contain information which may suggest Aboriginal or Torres Strait Islander heritage, many servicemen have been identified as Indigenous by their descendants.

Here you can find a list of known indigenous service people.

Over 1000 Indigenous Australians fought in the First World War. They came from a section of society with few rights, low wages, and poor living conditions. Most Indigenous Australians could not vote and none were counted in the census. But once in the AIF, they were treated as equals. They were paid the same as other soldiers and generally accepted without prejudice.

When war broke out in 1914, many Indigenous Australians who tried to enlist were rejected on the grounds of race; others slipped through the net. By October 1917, when recruits were harder to find and one conscription referendum had already been lost, restrictions were cautiously eased. A new Military Order stated: "Half-castes may be enlisted in the Australian Imperial Force provided that the examining Medical Officers are satisfied that one of the parents is of European origin."

This was as far as Australia – officially – would go.

Why did they fight?

Loyalty and patriotism may have encouraged Indigenous Australians to enlist. Some saw it as a chance to prove themselves the equal of Europeans or to push for better treatment after the war.

For many Australians in 1914 the offer of 6 shillings a day for a trip overseas was simply too good to miss.

Indigenous Australians in the First World War served on equal terms but after the war, in areas such as education, employment, and civil liberties, Aboriginal ex-servicemen and women found that discrimination remained or, indeed, had worsened during the war period.

Only one Indigenous Australian is known to have received land in New South Wales under a "soldier settlement" scheme, despite the fact that much of the best farming land in Aboriginal reserves was confiscated for soldier settlement blocks.

Hundreds of Indigenous Australians served in the 2nd AIF and the militia. Many were killed fighting and at least a dozen died as prisoners of war. As in the First World War, Indigenous Australians served under the same conditions as whites and, in most cases, with the promise of full citizenship rights after the war. Generally, there seems to have been little racism between soldiers.

In 1939 Indigenous Australians were divided over the issue of military service. Some Aboriginal organisations believed war service would help the push for full citizenship rights and proposed the formation of special Aboriginal battalions to maximise public visibility.

Others, such as William Cooper, the Secretary of the Australian Aborigines’ League, argued that Indigenous Australians should not fight for white Australia. Cooper had lost his son in the First World War and was bitter that Aboriginal sacrifice had not brought any improvement in rights and conditions. He likened conditions in white-administered Aboriginal settlements to those suffered by Jews under Hitler. Cooper demanded improvements at home before taking up "the privilege of defending the land which was taken from him by the White race without compensation or even kindness".

In the front line

Nevertheless, Indigenous Australians who fought for their country came back to much the same discrimination as before. For example, many were barred from Returned and Services League clubs, except on Anzac Day. Many of them were not given the right to vote for another 17 years.

Enlistment after the war

Once the intense demands of the war were gone, the army re-imposed its restrictions on enlistment. But attitudes had changed and restrictions based on race were abandoned in 1949. Since then Indigenous Australians and Torres Strait Islanders have served in all conflicts in which Australia has participated.

Throughout the Second World War the RAAF, with its huge need for manpower, was less restrictive in its recruiting than the army. However, little is known about Aboriginal aircrew. Indigenous Australians were employed for surveillance in northern Australia and to rescue downed pilots.

Leonard Waters, a childhood admirer of Charles Kingsford-Smith and Amy Johnson, joined the RAAF in 1942. After lengthy and highly competitve training he was selected as a pilot and assigned to 78 Squadron, stationed in Dutch New Guinea and later in Borneo. The squadron flew Kittyhawk fighters like the one on display inthe Memorial's Aircraft Hall.

Waters named his Kittyhawk "Black Magic" and flew 95 operational sorties. After the war he hoped to find a career in civilian flying but bureaucratic delays and lack of financial backing forced him to go back to shearing. Like many others, he found civilian life did not allow him to use the skills that he had gained during the war.

As well as an unknown number of formally enlisted Indigenous Australians and Islanders, the RAN also employed some informal units. For example, John Gribble, a coastwatcher on Melville Island, formed a unit of 36 Indigenous Australians which patrolled a large area of coast and islands. The men were never formally enlisted and remained unpaid throughout the war, despite the promise of otherwise.

The United States Army recruited about 20 Torres Strait Islanders as crewmen on its small ships operating in the Torres Strait and around Papua New Guinea. Kamuel Abednego was given the rank of lieutenant, at a time when no Indigenous Australian or Islander had served as a commissioned officer with the Australian forces.

Life on the home front

During the Second World War the army and RAAF depended heavily on Aboriginal labour in northern Australia. Indigenous Australians worked on construction sites, in army butcheries, and on army farms. They also drove trucks, handled cargo, and provided general labour around camps. The RAAF sited airfields and radar stations near missions that could provide Aboriginal labour. At a time when Australia was drawing on all its reserves of men and women to support the war effort, the contribution of Indigenous Australians was vital.

The army began to employ Indigenous Australians in the Northern Territory in 1933, on conditions similar to those endured by Aboriginal workers on pastoral stations: long hours, poor housing and diet, and low pay. But as the army took over control of settlements from the Native Affairs Branch during the war conditions improved greatly. For the first time Indigenous Australians were given adequate housing and sanitation, fixed working hours, proper rations, and access to medical treatment in army hospitals.

In some areas the war caused great hardship. In the islands of Torres Strait, the pearling luggers that provided most of the local income were confiscated in case they fell into Japanese hands. The Islanders enlisted in units such as the Torres Strait Light Infantry, in which their pay was much lower than whites and often not enough to send home to feed their families

Aboriginal women also played an important role. Many enlisted in the women’s services or worked in war industries. In northern Australia Aboriginal and Islander women worked hard to support isolated RAAF outposts and even helped to salvage crashed aircraft.

Oodgeroo Noonuccal joined the Australian Women’s Army Service in 1942, after her two brothers were captured by the Japanese at the fall of Singapore. Serving as a signaller in Brisbane she met many black American soldiers, as well as European Australians. These contacts helped to lay the foundations for her later advocacy of Aboriginal rights.

Since early the early twentieth century proposals were made to train the Indigenous Australians of northern Australia as a defence force. In the Second World War these ideas were tried out.

In 1941 the Torres Strait Light Infantry Battalion was formed to defend the strategically-important Torres Strait area. Other Islander units were also created, especially for water transport and as coastal artillery. The battalion never had the chance to engage the enemy but some were sent on patrol into Japanese-controlled Dutch New Guinea.

By 1944 almost every able-bodied male Torres Strait Islander had enlisted. However, they never received the same rates of pay or conditions as white soldiers. At first their pay was one-third that of regular soldiers. After a two-day "mutiny" in December 1943 this was raised to two-thirds.

In proportion to population, no community in Australia contributed more to the war effort in the Second World War than the Torres Strait Islanders.

Donald Thomson was an anthropologist from Melbourne who had lived with the East Arnhem Land Indigenous Australians for two years in the 1930s. In 1941 he set up and led the Northern Territory Special Reconnaissance Unit, an irregular army unit consisting of 51 Indigenous Australians, five whites, and a number of Pacific and Torres Strait Islanders. Three of the men had been to gaol for killing the crews of two Japanese pearling luggers in 1932. Now they were told that it was their duty to kill Japanese.

The members of the unit were to use their traditional bushcraft and fighting skills to patrol the coastal area, establish coastwatchers, and fight a guerilla war against any Japanese who landed. Living off the country and using traditional weapons, they were mobile and had no supply line to protect. Thomson shared the group's hardships and used his knowledge of Aboriginal custom to help deal with traditional rivalries. The unit was eventually disbanded, once the fear of a Japanese landing had disappeared.

The Indigenous Australians in the unit received no monetary pay until back pay and medals were finally awarded in 1992.

Kapiu Gagai was a Torres Strait Islander from Badu Island. He was a skilled boatman and carpenter and was working on pearling luggers when he joined Donald Thomson in Arnhem Land during the 1930s. In 1941 he again joined Thomson, this time in the Northern Territory Special Reconnaissance Unit. As bosun of Thomson’s vessel, the Aroetta, he patrolled the coast to prevent Japanese infiltration. Later he accompanied Thomson on patrol into Japanese-held Dutch New Guinea, where he was badly wounded. Gagai never received equivalent pay to white soldiers, which was also difficult for his family during and after the war.

Indigenous personnel are known to have served in later conflicts and operations (including in Somalia, East Timor, Afghanistan, Iraq, and on peacekeeping operations) but no numbers are available.

In the 1980s the Department of Defence began collecting information about Indigenous heritage, and these figures show that the number of Indigenous men and women serving in the Australian Defence Force has been increasing since the 1990s. The department claimed that in early 2014 there were 1,054 Indigenous service personnel (on both permanent and active reserve) in the Australian Defence Force, representing about 1.4 per cent of the ADF’s uniformed workforce.