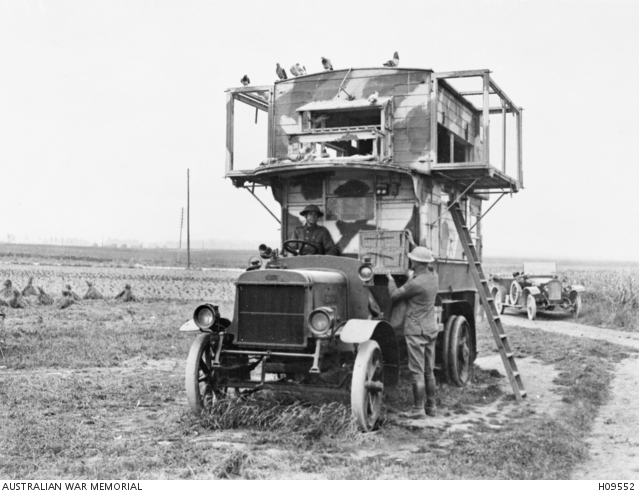 Homing pigeons have been used to carry messages since ancient times. The instincts which allow them to find their way home are not well understood. Magnetoreception (a sense which allows an organism to detect a magnetic field to perceive direction, altitude or location) may play a part in determining direction, as may a pigeon’s ability to identify landmarks. Keen sight and a superior memory also appear to be factors, although pigeons cannot keep flying to their home base in the dark or in poor visibility such as fog.

Messenger pigeons have numerous advantages in wartime. They are easy to transport, eat very little and can travel quickly. They are not easily distracted from their task (as military dogs might be) and if captured, there is no evidence of their origin or destination. With an average speed of around 90 kilometers per hour over moderate distances, they are faster than a runner, a cyclist or a man on horseback.

Pigeons were carried and used successfully in aircraft and ships. However, they were most commonly used by the British Expeditionary Force to send messages from the front line trenches or advancing units. The Carrier Pigeon Service was managed by the Directorate of Army Signals.

Pigeons were kept in stationary or mobile lofts to which they would return with their messages. Stationary lofts were sometimes established in outbuildings, sheds or even the roofs of houses. In the field, wooden sheds were often specially constructed for this purpose. Mobile lofts (horse-drawn or motorised) were used wherever it was impossible to establish a stationary loft. Once the birds were accustomed to their mobile loft in a given position, the lofts could be moved forward or to the rear. 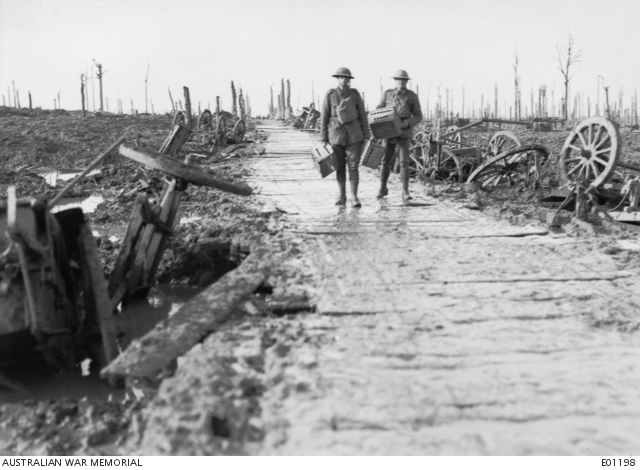 Messages were sent in duplicate by two separate birds released at an interval of one minute. Male and female were not released together. If a message was extremely secret, it would be written in code as some birds were killed or captured by the enemy. Destination and origin addresses were always encoded. 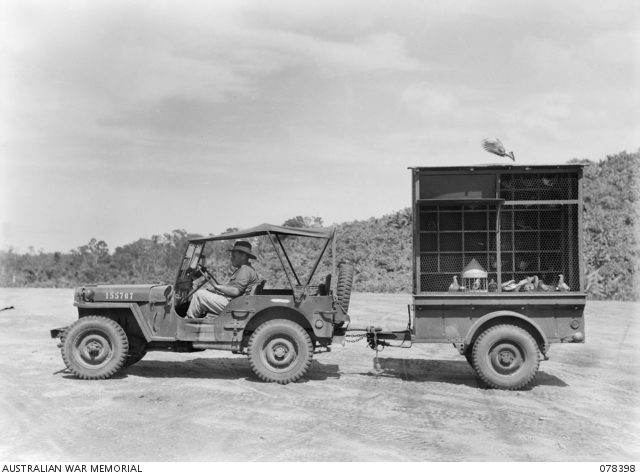 In 1942, when the threat of invasion of Australia by the Japanese was feared to be imminent, communication was mainly by line and wireless.  A meeting between civilian pigeon fanciers and senior army signal officers resulted in a trial of pigeons as an alternative means of communication. The trial was successful resulting in the creation of the Australian Corps of Signals Pigeon Service, staffed mostly by army members who had been pigeon fanciers in civilian life. After an Australia-wide appeal over 13,500 homing pigeons were donated to the service.

Pigeons were soon sent to jungle areas but as they were badly affected by the climate in New Guinea army breeding lofts were established to breed pigeons in the area in which they were to operate. Pigeon sections were located in many areas of New Guinea, including Tarakan, Laubuan, Morotai, Bougainville and New Britain.

Lofts were also attached to signals schools, infantry training schools and water transport schools so that personnel could learn how to care for pigeons.

The pigeons were fed maple peas, wheat, unpolished rice, canary seed, linseed, Milo, and hulled oats. They were frequently dusted in DDT (pesticide) to control feather lice which was common in tropical areas.

Flying conditions for pigeons in New Guinea were extremely difficult at times. Mountainous topography combined with tropical rain and mist exerted its toll on the pigeons. REgardless, messenger pigeons were still considered an efficient line of communication. 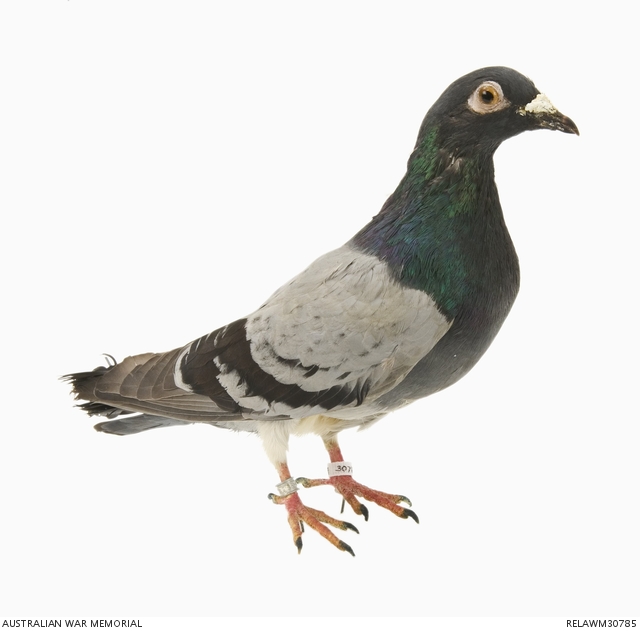 Blue Bar Cock Pigeon No 139 was awarded the Dickin Medal for gallantry as a result of a flight through a severe tropical storm near Madang, New Guinea, on 12 July 1945.

The pigeon was located with Detachment 55 Port Craft Company, Madang and carried a message from a foundering boat to Madang, flying 40 miles (64km) in 50 minutes. The message read: “To: Detachment 55 Australian Port Craft Company, MADANG. From: A.B. 1402. Date: 12.7.45. Engine Failed. Wash on to beach at WADAU owing very heavy seas. Send help immediately. Am rapidly filling with sand./ TOO: 0800 - Senders signature - HOLLAND Cpl./ TO Liberation 0805 - No. of copies 2./ TOR at Loft - 0855”. As a result of the successful delivery of the message the boat,valuable stores, ammunition and equipment was salvaged. The bird had previously completed 23 operational flights over a total distance of 1,004 miles.

The pigeon was awarded the Dickin Medal in February 1947 with the citation reading: “During a heavy tropical storm this bird was released from Army boat 1402 which had foundered on Wadou Beach in the Huon Gulf. Homming [sic] 40 miles to Madang it brought a message which enabled a rescue ship to be sent in time to salvage the craft and its valuable cargo of stores and ammunition.”

Captain Stuart McDonald and his company were also grateful to homing pigeons.

On 2 July 1945, Captain McDonald’s company on Bougainville was ordered to Mivo River to establish a base and construct a dropping zone from which the battalion could operate.

On their first day, they struck an enemy force of about one hundred. D Company was unable to leave its position as the Japanese fired whenever the men tried to break free. Communication lines had been cut so the men could not contact battalion headquarters.

On day three D Company released their two pigeons with a message asking for fire in five hours. The pigeons got through with the message and the Japanese were shelled. For his action at the Mivo River from 2–5 July 1945, Captain McDonald was awarded the Military Cross.