The primary role of a Voluntary Aid Detachment (VAD) member was that of nursing orderly in hospitals, carrying out menial but essential tasks - scrubbing floors, sweeping, dusting and cleaning bathrooms and other areas, dealing with bedpans, and washing patients. They were not employed in military hospitals, except as ward and pantry maids; rather, they worked in Red Cross convalescent and rest homes, canteens, and on troop trains.

At the start of the First World War, Australian VADs were restricted from traveling overseas by the Defence Council. As a result, many chose to travel on their own initiative and join British detachments, often in Australian Hospitals. It is reported that the 1st Australian Auxiliary Hospital included in their nursing staff some 120 VADs, chiefly Australians in the British service, employed through the Australian Red Cross Society. This policy was changed in 1916 after a request from Great Britain, and the first detachment of thirty official Australian VADs to serve overseas left Australia in September 1916.

The role of VADs did not significantly evolve between the wars. VADs in the Second World War were given more medical training, but they were not fully qualified nurses. They worked in convalescent hospitals, on hospital ships and the blood bank as well as on the home front. In 1943, the government created the Australian Women's Auxiliary Service (AWAS) to control the large numbers of VADs employed by the military.

In 1967, the VAD movement became known as the Voluntary Aid Service Corps (VASC). 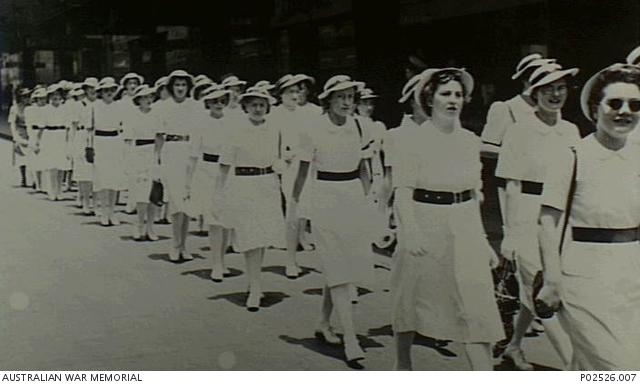 A group of Voluntary Aid Detachment (VAD) nurses marching along George Street after attending a Christmas service in the Cathedral (P02526.007)