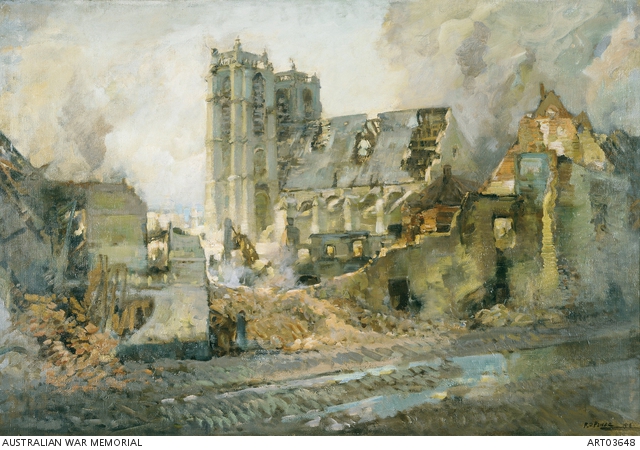 Depicts the ruins of Corbie Abbey church and the village buildings of Corbie, with rubble everywhere. Corbie village is on the Somme and was close to the fighting, with AIF soldiers passing through soon after this damage was incurred. The town was heavily shelled by the Germans between 22 April and 10 May 1918 and the church sustained many direct hits.

Power was born in Dunedin, New Zealand in 1877. When he was young his family immigrated to Australia and settled in Melbourne. At the age of 14, Power ran away from home to pursue a career as an artist. He developed a passion for drawing animals, especially horses, and found jobs that involved contact with animals. In 1900 Power moved to Adelaide where he worked as a political cartoonist with the Register, and painted in the Adelaide hills with Hans Heysen. In 1903 Power was the first Australian artist to receive a commission from the National Gallery of South Australia. In 1905 he traveled to Europe to study at the Academe Julian in Paris. Power eventually moved to London, where he was able to indulge his passion for animal painting with commissions from wealthy English patrons, and he regularly exhibited at the Royal Academy throughout his career. In 1917, Power was appointed an official war artist with the rank of honorary lieutenant and attached to the 1st Division AIF. He worked in France from September to December. He was commissioned for a second time from August 1918 to March 1920, and then contracted on commissions for the Australian War Memorial until 1938. A number of Power's commissions were for large paintings depicting significant campaigns of the Australian Light Horse during the First World War, including Leaders of the Australian Light Horse in Palestine, 1918 and Ziza. In 1922 the Melbourne Public Library commissioned a large mural depicting the Middle Eastern Theatre and the Western Front. In 1927 the Commonwealth selected Power and fellow artist W B McInnes to depict the opening of Parliament in the new Commonwealth building in Canberra. Septimus Power earned a legendary reputation for his vivid depictions of animals, particularly horses, featured in so many of the paintings he produced for the Australian War Memorial as an official war artist.