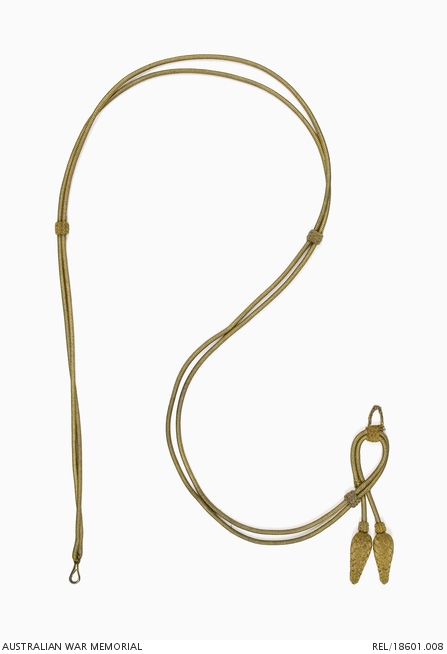 Doubled gold bullion braid with two gold wire runners with which to adjust the line and two gold wire acorns at each end. At the looped end of the line is a brass quick release catch that clips onto a cap or helmet.

Cap lines were worn by some mounted troops in various orders of dress. Their purpose was to prevent the headdress falling to the ground if it was dislodged while the wearer was mounted. Dislodged headdress could be pulled up by the attached cap lines and replaced on the head. These lines were worn with full dress by Quartermaster-Sergeant (QMS) Harry Looney. QMS Looney was born circa 1847 and entered into the service of Sir William Clarke, a Victorian landowner, in 1868. He became head coachman at Rupertswood, the Clarke family residence in Sunbury, Victoria, and Sir William's trusted retainer. In 1884 Sir William fostered a militia corps called the Victorian Nordenfeldt Battery, also known as Rupertswood Battery or the Sunbury Regiment of the Victorian Horse Artillery. Looney was appointed as the battery's first sergeant and 12 1/2 years later was promoted to the rank of quartermaster-sergeant. He served with the battery until it was disbanded in June 1897, shortly after the death of Sir William. During his period of service Looney won numerous military contest medals and awards. He was also part of the Rupertswood contingent which competed in a Royal Military Tournament in England in 1893, where his team came second in the riding and jumping section of the competition. At the age of 60 he qualified as a veterinary surgeon. His uniform and other memorabilia was displayed in the waiting room of his surgery in Sunbury, Victoria. Looney died in 1930