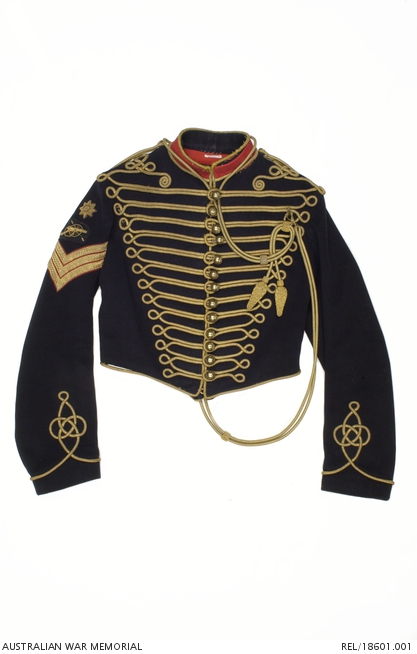 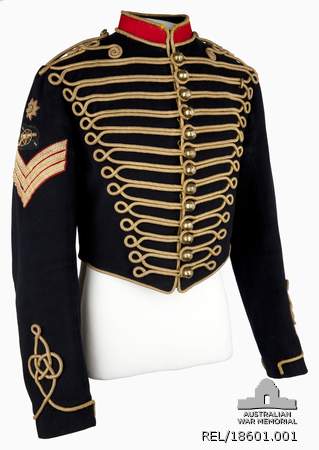 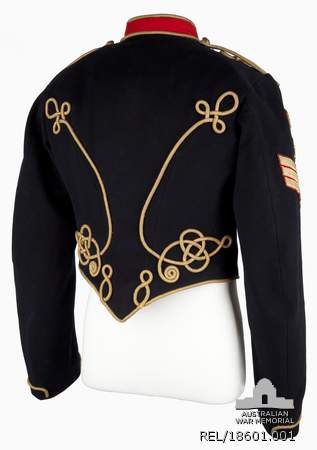 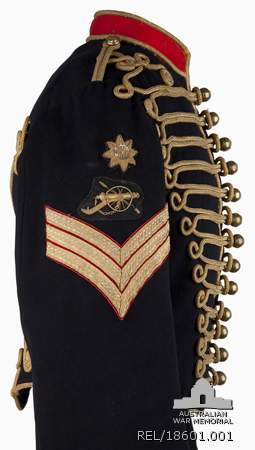 Dark blue wool jacket with red stand collar edged with round gold cord and lined with the same blue wool. Round gold cord extends down centre front and lower edge of jacket where it forms two figure of eights at the back seams. The front is decorated with thirteen rows of gold cord loops tapered from the shoulders to the waist. At the second row, left side, is a brass hook for cap lines. At the shoulders, the braid finishes with a crowsfoot and swirl. Each looped row fastens at the front over Victorian Horse Artillery gilt ball buttons made by 'FIRMINS Co LONDON'. Brass hooks and eyes are positioned between each looped fastening on the inside edge of the jacket. Shoulder straps of a double row of round gold cord are looped around a small gilt Victorian military forces button. The sleeve cuffs are decorated with gold cord Austrian knots. On the right sleeve above the elbow are three gold lace sergeant's chevrons on red wool and above this, an embroidered gold bullion gun badge surmounted by an embroidered gold bullion eight-pointed star denoting the rank of quartermaster-sergeant. At the back of the jacket each seam is decorated with round gold cord beginning at the shoulder with a crowsfoot and ending with an Austrian knot and swirl at each side of the waist. The jacket is fully lined with a scarlet wool and cotton twill mixture. There is a concealed pocket inside the left breast lined with striped white cotton twill. Sleeves are also lined with cotton twill. On the inside of the collar at the left edge is a black patent leather tab. The cap lines are of a doubled row of round gold cord with four plaited gold wire runners to adjust the line. At the folded end is a brass quick release clip and at the two free ends are plaited gold wire acorns.

Worn by Quartermaster-Sergeant (QMS) Harry Looney. The cap lines were always worn on the jacket and attached to the headdress when required to prevent the loss of helmet or forage cap while on horseback. QMS Looney was born circa 1847 and entered the service of Sir William Clarke, a Victorian landowner, in 1868. He became head coachman at Rupertswood, the Clarke family residence in Sunbury, Victoria, and Sir William's trusted retainer. In 1884 Sir William fostered a militia corps called the Victorian Nordenfeldt Battery, also known as the Rupertswood Battery or the Sunbury Regiment of the Victorian Horse Artillery. Looney was appointed as the battery's first sergeant and 12 1/2 years later was promoted to the rank of quartermaster-sergeant. He served with the battery until it was disbanded in June 1897, shortly after the death of Sir William. During his period of service Looney won numerous military contest medals and awards. He was also part of the Rupertswood contingent which competed in a Royal Military Tournament in England in 1893, where his team came second in the riding and jumping section of the competition. At the age of 60 he qualified as a veterinary surgeon. This jacket and other memorabilia was displayed in the waiting room of his surgery in Sunbury, Victoria. Looney died in 1930. Although there is no maker's label in the jacket, it may have been made in the United Kingdom by the Royal Clothing Factory at Pimlico. The materials used in this jacket are similar to those described in jackets made at Pimlico in 'The Galloping Guns' by Lindsay C. Cox, p.126.