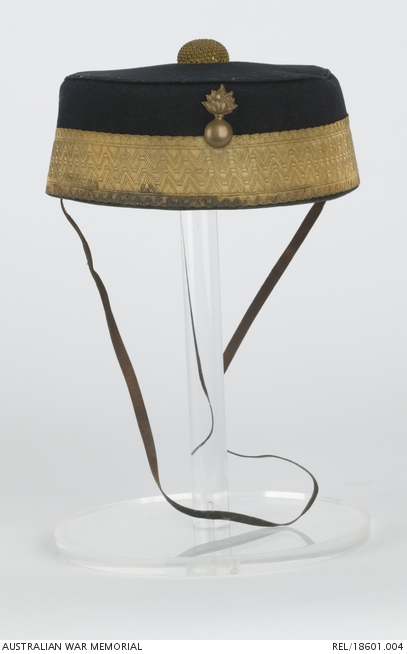 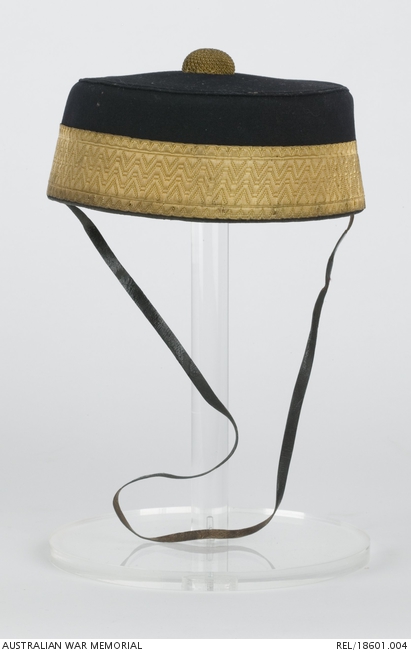 Dark blue wool peakless forage cap with a dark blue piped seam at the crown. In the centre of the crown is a wooden button covered with gold net. The side of the cap is trimmed with a broad gold artillery parttern lace and at the front of the cap above and just overlapping the lace is a brass exploding grenade badge. The crown and side of the cap are made from buckram and are lined with a quilted layer of crimson satin, wadding and newspaper. The leather headband is inscribed in ink 'Sergt Looney No 7'. Beneath the headband is a narrow black patent leather chinstrap which is attached to the inside of the cap with metal hooks. In the centre of the crimson lining is a worn now unreadable maker's label stamped in gold letters.

Worn by Quartermaster-Sergent (QMS) Harry Looney. QMS Looney was born circa 1847 and entered into the service of Sir William Clarke, a Victorian landowner, in 1868. He became head coachman at Rupertswood, the Clarke family estate at Sunbury, Victoria, and Sir William's trusted retainer. In 1884 Sir William sponsored a militia corps called the Victorian Nordenfeldt Battery, also known as Rupertswood Battery or the Sunbury Regiment of the Victorian Horse Artillery. Looney was appointed as the battery's first sergeant and 12 1/2 years later was promoted to the rank of quartermaster-sergeant. He served with the battery until it was disbanded in June 1897, shortly after the death of Sir William. During his period of service Looney won numerous military contest medals and awards. He was also part of the Rupertswood contingent which competed in a Royal Military Tournament in England in 1893, where his team came second in the riding and jumping section of the competition. At the age of 60 he qualified as a veterinary surgeon. This cap and other memorabilia was displayed in the waiting room of his surgery in Sunbury, Victoria. Looney died in 1930.