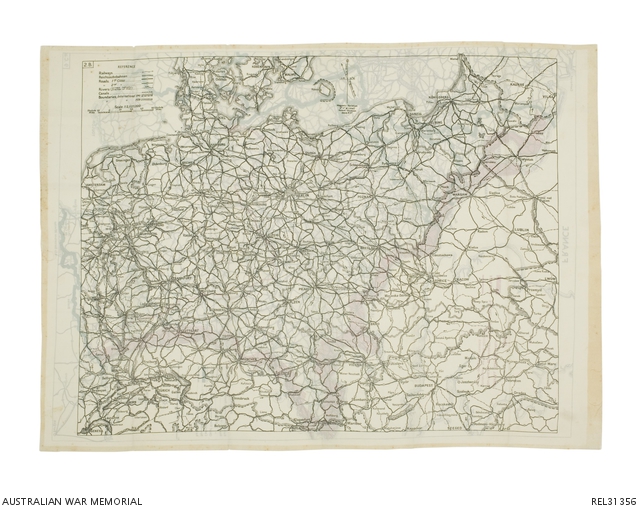 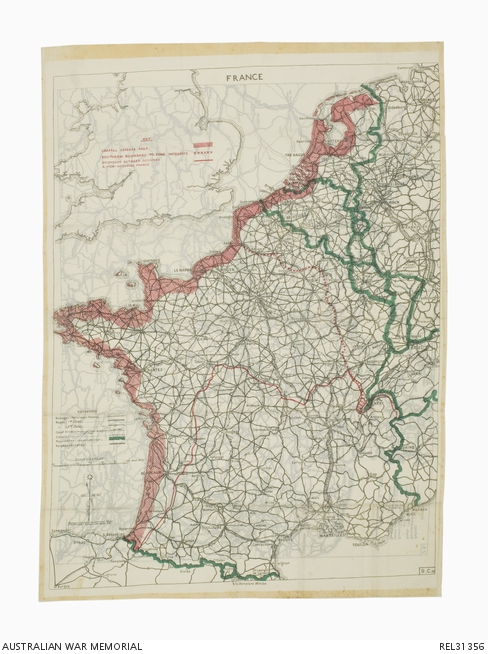 Double sided silk escape map issued as part of a Royal Air Force escape kit. One side is marked '9.C(a)' and shows a 1:2 350 000 scale map of France. The coastal defence area and the boundary between occupied and non-occupied France is shown in red, and international boundaries are marked in green. The other side is marked '2.B.' and shows a 1:2 625 000 scale map of Germany, Austria, Poland, Switzerland and Hungary.

Hawken was born on 31 December 1916 in Kerang, Victoria. He enlisted as an aircraftman in the Royal Australian Air Force (RAAF) on 29 May 1942 and trained in Australia as part of the Empire Air Training Scheme (EATS). In April 1943 Hawken qualified as a wireless operator/air gunner and was promoted to sergeant. He sailed to the United Kingdom in May where he was attached to the Royal Air Force (RAF) and Bomber Command. After completing a series of advanced training courses he was promoted to flight sergeant in October and then posted to 630 Squadron RAF in May 1944.

In the following months Hawken flew a number of bombing missions over Europe. On his fourth raid the target was Brunswick, Germany, and Hawken and his fellow crew members were lucky to escape being shot down after their Lancaster, R for Roger, was attacked by an enemy fighter. The pilot managed to fly the damaged aircraft back to England and landed with only minutes of fuel remaining. By July Hawken was more than halfway through his operational tour of 30 raids, a feat not easily achieved with Bomber Command crews suffering a casualty rate of over 40 percent.

On the night of 18 July Hawken was aboard Lancaster LE-S ME796, one of 115 Bomber Command aircraft targeting the railway marshalling yards at Revigny, France, 225 km east of Paris. The bombers were met with heavy action from enemy fighters as they crossed the French coast and several aircraft were lost. Hawken’s aircraft escaped damage and continued on to the target where he received a radio message to delay bombing for five minutes, forcing them to circle the target until they were able to come in for another bombing run. While they were circling, the aircraft’s two inboard engines burst in to flames when they were struck by machine gun fire from an enemy fighter. With the engines burning out of control it was only a matter of seconds before the aircraft would blow up or crash. Pilot 425331 Flying Officer Gordon Maxwell, RAAF, gave the order for the crew to bail out of the aircraft. Hawken parachuted from the rear escape hatch along with rear gunner Flight Sergeant Paddy Leary, RAF, and mid upper gunner Sergeant Albert De Bruin, RAF. The remaining crew, including pilot Maxwell, flight engineer 945986 Sergeant Jim Howie, RAF, navigator 423625 Flying Officer Johnny Bush, RAAF, and bomb aimer 1399035 Flight Sergeant Bill Griffiths, RAF, were unable to escape and went down with the aircraft which crashed near Villers-le-Sec.

Hawken parachuted into a small forest, landed in a tree and was briefly knocked out but not badly injured. He soon got his bearings and proceeded to make his way away from his landing site until he came to a farmhouse near the village of Saint Vrain. He cautiously approached the occupants to ask for assistance and was reluctantly admitted inside while a young boy was sent to the village to fetch the local school teacher, Jean Vidal. Unbeknown to the farmhouse occupants, Vidal was the leader of the local resistance movement and had previously helped three American airmen escape from France. Hawken was taken to Vidal’s home where he was hidden for several weeks before German troops moved into the village, forcing him to leave and join a group of the Maquisards (guerrillas) who had set up a camp several kilometres away.

While out looking for food Hawken meet two American airmen who had been shot down six months earlier. He decided to leave the Maquisards and join the Americans who were sheltering in a forest and waiting for the allies to advance through the area. On 2 September the nearby village of Cheminon was liberated by the United States Army’s 25th Light Cavalry unit. Hawken was taken in by the Americans and transported to Paris and then on to England where he underwent a debriefing by British Intelligence and took a well earned period of leave. Hawken was commissioned pilot officer on 24 September and returned to Australia in January 1945. He was promoted to flying officer on 24 March before being discharged on 16 October.

Returning to civilian life, Hawken established a successful drainage business and went on to become mayor of Mordialloc, Victoria, in 1957. He was made an Officer of the Order of the British Empire (OBE) in 1974. His younger brother, VX12727 Private Lawrence Hawken, served with 2/8 Battalion and was killed in action on 21 January 1941 during the battle for Tobruk.