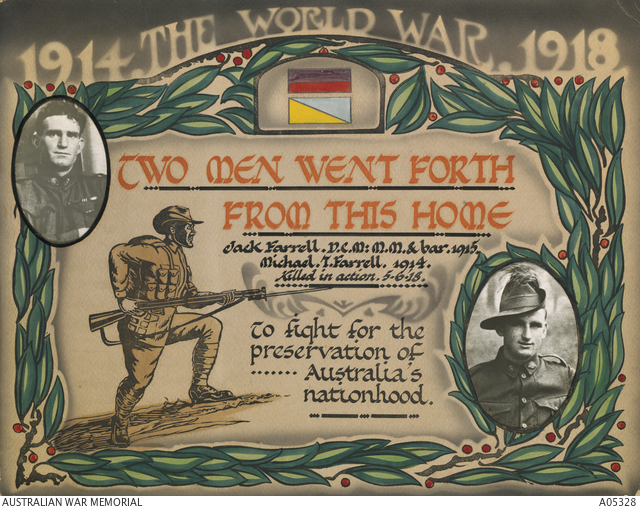 Commemorative woodblock print presented as a family plaque with portraits of the two brothers who served in the First World War. It reads: '1914 The World War 1918. Two men who went forth from this home. Jack Farrell DCM MM and Bar 1915. Michael T Farrell 1914. Killed in action 5 June 1918. To fight for the preservation of Australia's nationhood'. A butcher from Garvoc, Victoria prior to enlistment, 28 Trooper Michael Thomas Farrell served with the 8th Australian Light Horse Regiment. He died of wounds on 5 June 1918, aged 26. His brother, 2612 John Herbert Farrell, was awarded the Military Medal (1917) and Bar (1918) and a Distinguished Conduct Medal (1919). He returned to Australia on 5 January 1919. The creator of the woodblock print was artist Paul Windle, late of the 7th Battalion, who had been discharged medically unfit in 1917 and returned to Australia. In September 1918, he applied for and was granted copyright for a "Home Honor Board" design, of which this is one example. Another example can be found at P06016.001.