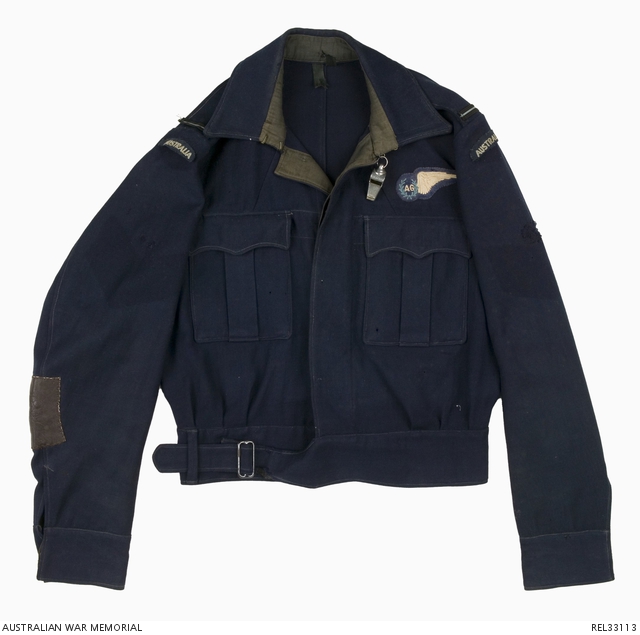 RAAF blue battledress blouse with fold down collar and two pleated patch breast pockets with concealed button closure. The blouse fastens down the centre by five black plastic buttons, and at the throat by a pair of hooks and eyes, to one of which is attached a whistle. The whistle is impressed on one side with '293/14/L1795' and on the other with 'A.M.' a King's crown and '23/230'. The belted waist of the blouse is gathered and fastened by a blackened brass buckle. The cuffs of the sleeve are fastened by concealed buttons. The blouse also has an shoulder strap on each side, secured by a black plastic button, on to which are sewn rank stripes for a Flying Officer. The inside of the collar, cuffs, waist and placket are lined with a brown cotton fabric. The fabric lining the rear waistband has three button holes for securing to the trousers. There are two side opening internal pockets. A white cotton label stitched inside the right side has sizing and makers details: a Broad Arrow between the letters 'A.' and 'F.' and '1943 M. TX SIZE 10'. The upper left sleeve is darned and the lower right sleeve is patched with a square of leather. Both sleeves show areas where Flight Sergeants stripes had been previously sewn. Embroidered 'Australia' shoulder titles are sewn onto the tops of both sleeves and a machine embroidered Air Gunners badge is sewn above the left breast pocket.

Worn by Flying Officer Peter Charles Firkins during his service with 460 Squadron, RAAF. Born in 1925, Firkins was educated at Guildford Grammar School, Western Australia. In 1943, at the age of seventeen, he joined the Royal Australian Air Force and served as an NCO rear gunner with 460 Squadron, RAAF. He had completed his tour of twenty-nine operations and received his commission before he turned nineteen. He became the historian of 460 Squadron and wrote the squadron's history, 'Strike and Return' as well as several other widely read military history books, including 'The Australians in Nine Wars'. An active and prominent member of the Perth business community, Peter Firkins died at his home in Perth in late 2002.