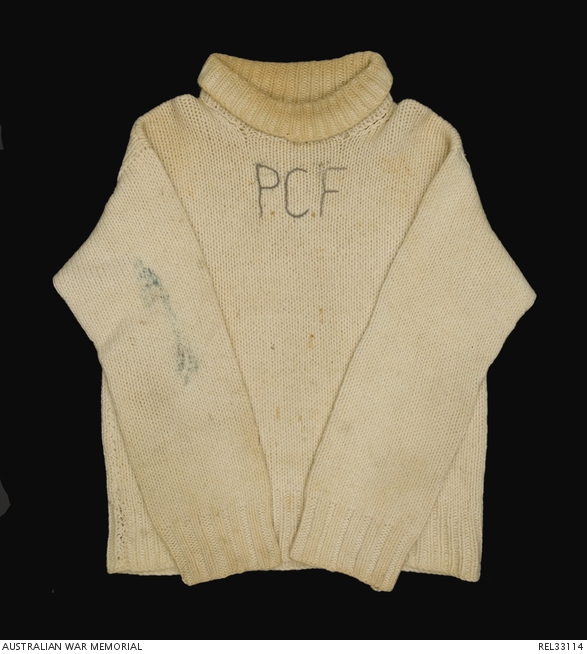 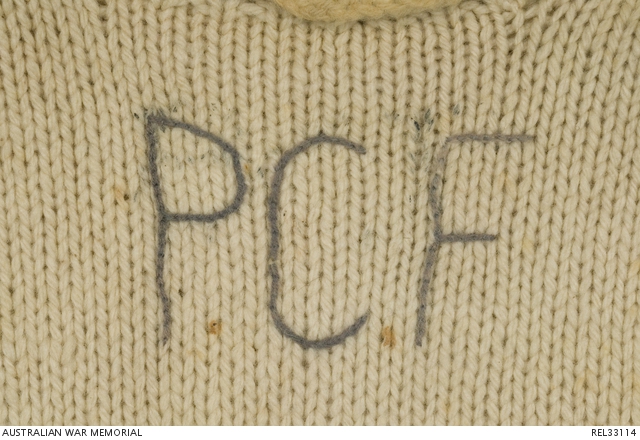 A hand-knitted woollen pullover with 'PCF' embroidered on the front in grey wool letters 65 mm high. The pullover is cream-coloured with a polo neck and was knitted using twelve ply wool in a stocking stitch with cable basque, cuffs and collar. Inside the collar, at the back, there is a narrow cotton tag, slightly stained with red, but with no name. The collar is yellowed and there is a blue mark 170 mm long on the right sleeve.

Often referred to as a 'Woolly Pully', this type of non-issue pullover was in common use during the Second World War by aircrew on cold weather operations. This example was worn by Flying Officer Peter Charles Firkins during his service with 460 Squadron, RAAF. Born in 1925, Firkins was educated at Guildford Grammar School, Western Australia. In 1943, at the age of seventeen, he joined the Royal Australian Air Force and served as an NCO rear gunner with 460 Squadron, RAAF. He had completed his tour of twenty-nine operations and received his commission before he turned nineteen. He became the historian of 460 Squadron and wrote the squadron's history, 'Strike and Return' as well as several other widely read military history books, including 'The Australians in Nine Wars'. An active and prominent member of the Perth business community, Peter Firkins died at his home in Perth in late 2002.