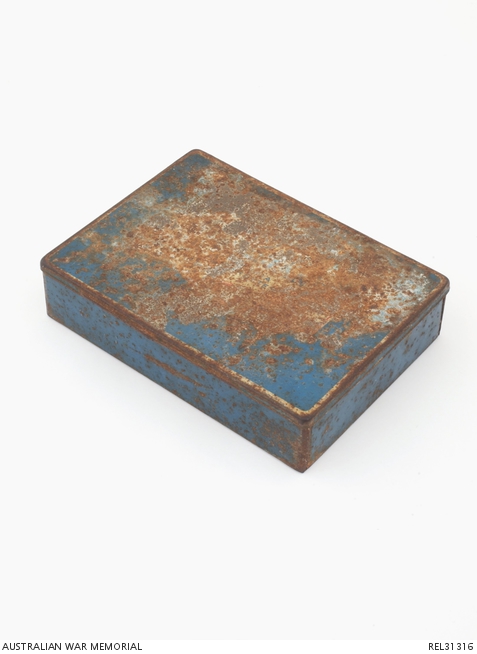 Blue painted and gilt 'Damman's' cigarette tin with a hinged lid.
Inside the lid is printed in black:

No.1 LARGE SIZE No.2 MEDIUM SIZE No.3 SMALL SIZE in small print;

DAMMAN’S
VIRGINIA
CIGARETTES
Freshly made from choice Virginia leaf.
Extreme care in every detail has been taken
To produce a mild fragrant cigarette of
High Quality – perfectly made.

At the bottom of the lid is printed in a line the following:

To the LHS is

Cnr. of Collins
and Swanston Sts.

Maric Jeggo 'Eddie' Gilbert was born at St Kilda, Victoria, in 1921. He worked with the (Victorian) State Electricity Commission before enlisting in the AIF in June 1940, becoming Private VX31080 in 10 Platoon, B Company, 2/21 Infantry Battalion. Sent to defend the island of Ambon (in the Dutch East Indies, now Indonesia) in December 1941 as 'Gull Force', the 2/21 was overwhelmed by the Japanese in January/February 1942. Most of 10 Platoon, which had defended the town of Ambon, survived the fighting to become prisoners of war. They endured a harsh captivity in Tan Toey (or Tantoei) Camp, site of the former 2/21 barracks, and were not released until September 1945. 11 and 12 Platoons of B Company, however, sent as reinforcements to Laha airfield, were massacred by the Japanese after surrendering. This cigarette tin was used by Gilbert to store the diary of his experiences which he wrote immediately after release. See PR0312 for diary. Post war, Mr Gilbert returned to his job with the SEC, with whom he worked until his retirement in the 1970s.