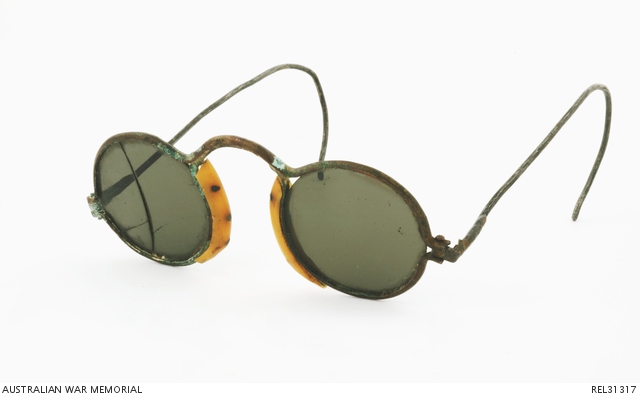 Pair of sunglasses manufactured in Tan Toey (or Tantoei) prisoner of war camp, Ambon. The glasses were made by an Australian prisoner from a pair of existing glass lenses, using split brass tubing for the frames and pieces of toothbrush handle for the nose guards.

Maric Jeggo 'Eddie' Gilbert was born at St Kilda, Victoria, in 1921. He worked with the (Victorian) State Electricity Commission before enlisting in the AIF in June 1940, becoming Private VX31080 in 10 Platoon, B Company, 2/21 Infantry Battalion. Sent to defend the island of Ambon (in the Dutch East Indies, now Indonesia) in December 1941 as 'Gull Force', the 2/21 was overwhelmed by the Japanese in January/February 1942. Most of 10 Platoon, which had defended the town of Ambon, survived the fighting to become prisoners of war. They endured a harsh captivity in Tan Toey (or Tantoei) Camp, site of the former 2/21 barracks, and were not released until September 1945. 11 and 12 Platoons of B Company, however, sent as reinforcements to Laha airfield, were massacred by the Japanese after surrendering. The sunglasses were manufactured within the camp for Gilbert by a fellow prisoner, and were worn to protect his eyes from the glare experienced when working in sand shovelling parties for the Japanese. Many prisoners, including Gilbert suffered permanent eye damage from this work. Post war, Mr Gilbert returned to his job with the SEC, with whom he worked until his retirement in the 1970s.