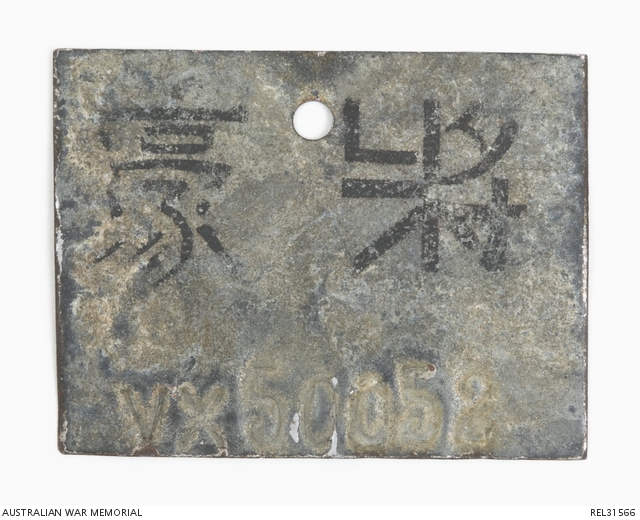 Small rectangular aluminium identity disc with a 4 mm mounting hole. The disc is marked in black along the top with Japanese characters which translate as 'AUSTRALIAN OFFICER'. Impressed beneath these characters is the service number 'VX50052'.

Associated with the service of VX50052 Lieutenant Austin Yeats Ellerman who served in 2/29 Battalion during the Second World War. Ellerman was born in Young, NSW in 1912. He worked as an accountant until his enlistment in 38 Militia Battalion in 1939. On 5 April, 1940 he received his commission and a year later, on 7 August 1941, he joined 2/29 Battalion. After a short period of training in Bathurst he sailed for Singapore on the Dutch ship 'Marnix Van Sint Aldegonde'. He saw active service in operations against the Japanese in Northern Johore, Batu Pahat Crossroads and Singapore Island, before being taken prisoner in Singapore. Ellerman was a member of the working party at Thompson Road and later worked on the wharves and godowns on the Singapore waterfront before returning to Roberts Barracks to work in the camp or gardens. In April 1943, the prisoners were told that due to food shortages they would be transferred to a camp in Thailand. After arriving in Bam-Pong they were made to march on foot for 180 miles to Shimo Sonkurai camp. A month later, in July 1943, they moved to Kami Sonkurai where they remained until the railway had passed through. In his memoirs 'Austin in the Army', Ellerman recounts his experiences on the railway working parties. He recalls that initially officers accompanied their men to work each day to try to persuade the guards to cut down the work load, stop beatings and generally supervise the tasks given to them. The practice was soon stopped however, as the Japanese Engineers realised that the officers were hindering their prisoner's work. In November 1943, the prisoners began their return journey to Changi, stopping at Kanchanabri Hospital Camp along the way. Ellerman spent most his remaining time in captivity at Camp Administration, on working parties on Japanese fortifications, aerodrome building and sending out work parties. He returned to Australia shortly after his release and was discharged on 30 January, 1946.