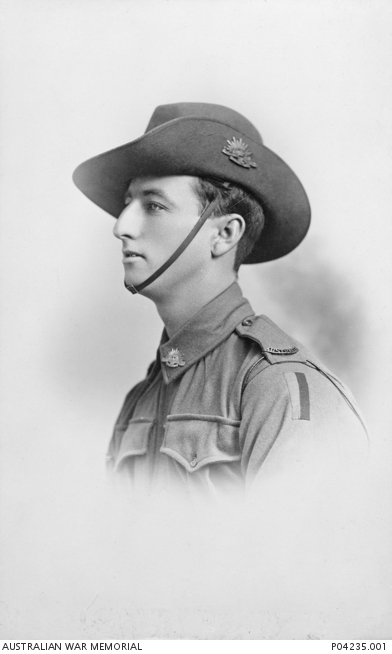 Studio portrait of 3765 Private (Pte) John Edmund (Jack) Buttsworth, 30th Battalion, of Bourke, NSW. Pte Buttsworth enlisted on 10 November 1915, and departed for service overseas aboard HMAT Anchises on 24 August 1916. He proceeded from England with the 8th Training Battalion to France, where he was posted to the 30th Battalion, and promoted to the rank of Sergeant (Sgt) in September 1917. Whilst distributing rum rations to members of his platoon in reserve trenches behind Villers Bretonneux, Sgt Buttsworth was badly wounded by shrapnel. He was taken to the 9th Australian Field Ambulance, where he died of his wounds a short time later, on 8 April 1918, aged 27 years. A portrait of Sgt Buttsworth's fiancee, Millicent A Walker, is held at P04235.002.