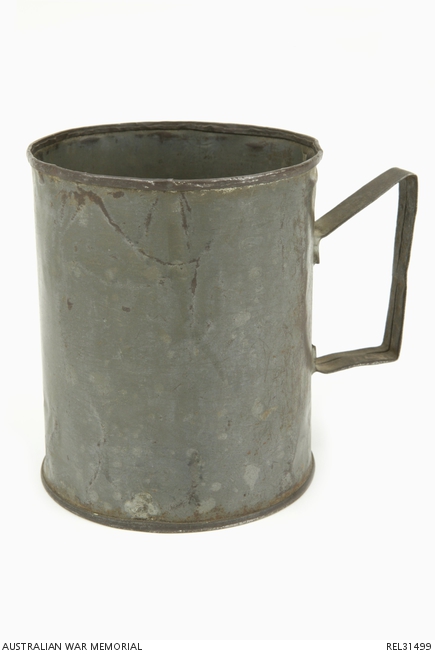 Large mug made from a used food tin. A three sided handle made of flattened tin has been soldered to the tin along the seam.

Tin mug used by Hugh King Ashby whilst a prisoner of war in Thailand. Before the Second World War Ashby, a scientist with the Colonial Service, was the State Agricultural Officer for Kelantan, Malaya. As the Japanese advanced down the peninsula, Ashby moved to Singapore. Having previously served with the Federated Malay States Volunteer Force, Ashby volunteered with the Straits Settlement Volunteer Force. Dressed in his FMSVF uniform and armed with a SMLE rifle he was set to guarding the SSVF headquarters. At the fall of Singapore he was taken prisoner and held in Changi Jail until June 1942. He was then sent to Bampong in Thailand. Bampong was at this stage an interim camp and the prisoners were marched to Non Pladuk each day to work on the Burma-Thailand Railway. Late in 1942 Ashby, with three others, was sent to a Japanese engineer's camp at Kanchanaburi where they worked in the cook house. Conditions here were relatively good with regular, though slight, meals and daily bathing. Ashby however succumbed to illness and in early 1943 was sent to a hospital camp at Chungkai. Ashby contracted a diphtheric ulcer and was given the last of the vaccine. In return he donated blood to other sufferers. In October 1943 he was sent back to Non Pladuk and remained there until January 1945 when he was sent to another camp at Ubon. On release he was sent to Rangoon and then sailed to England. He arrived in Liverpool in October 1945 and after a cursory medical check continued home to Westmoreland. In February 1946 he was recalled to the Colonial service and returned to his duties with the Agriculture Department in Kuala Lumpur. Ashby, like many former prisoners, refused to talk about his experiences. It was not until after he visited the Australian War Memorial in the 1980s that he was able to begin recording his story. He died in 1987, before finishing his memoirs, but requested that the few possessions from his time as a POW be donated to the Memorial.