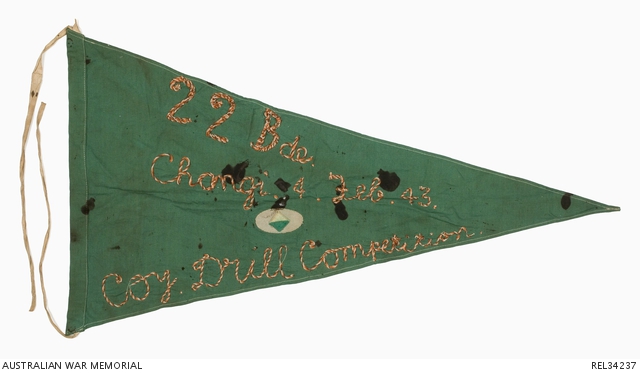 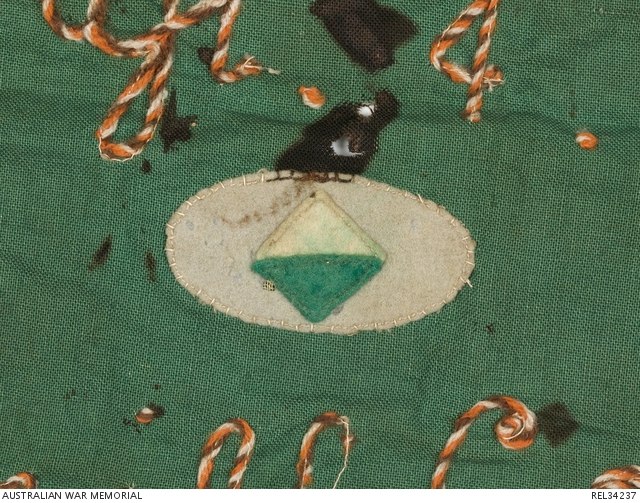 A green cotton pennant flag with '22 Bde / Changi 4 Feb. 43 / Coy Drill Competition' hand stitched with a combined orange/brown/white wool thread. An oval shaped felt colour patch of the 2/20th Battalion Australian Imperial Force has been centrally hand sewn onto the pennant. There are several dark ink patches on the object. A pair of cotton streamers fall from both the top and bottom of the hoist.

This object is associated with the service of Lieutenant NX76216 Laurence William Male. who was born on 30 April 1912 in Brighton, Victoria. He joined the Second Australian Imperial Force (AIF) on 24 July 1941 in Paddington, Sydney. At the time of joining the AIF he was living in Fairfield, then a semi-rural part of south west Sydney and his next of kin was Eileen Male. He served as a member of the General Base Depot of the 8th Australian Division, and was captured in the Malaya-Singapore campaign. After surviving captivity at the hands of the Imperial Japanese he returned to Australia and served as a member of the Australia Army until 30 April 1959, when, on his 47th birthday he retired with the rank of Captain. To break the monotony of imprisonment and to raise morale many different types of activities were taken on by the prisoners of war such as the event in which this pennant relates to, a drill (marching) competition. Other activities such as camp sports days, plays and other theatrical events were also hosted when possible due to the difficult physical and psychological conditions the prisoners endured.