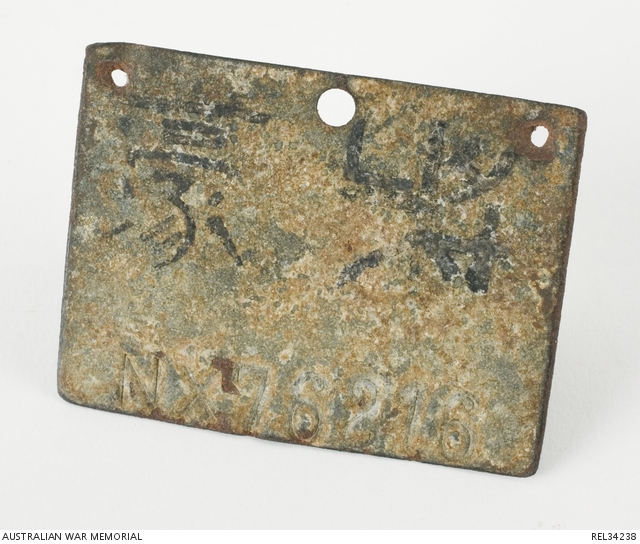 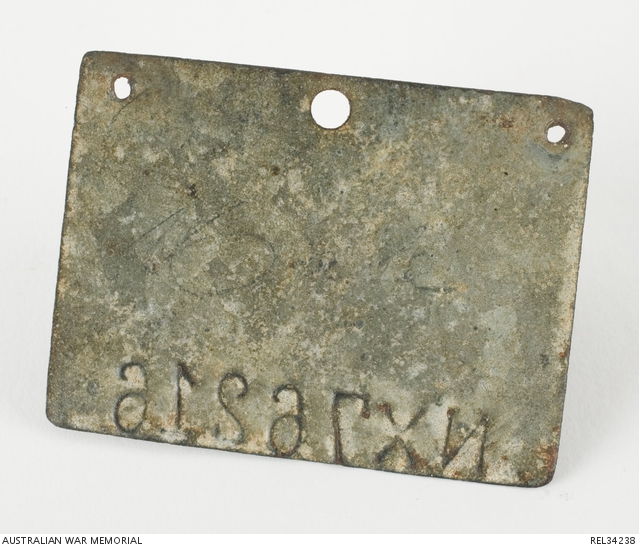 A Japanese rectangular tin identity disc for a prisoner of war. The disc has 'Australian Officer' in the old form of kanji in black ink on the front. The lower edge of the disc is impressed with the Australian Army service number 'NX76216'. Three holes are stamped into the top edge of the disc, these being a pair of 3mm diameter holes on either side and a 5mm diameter hole in the middle.

This identity disc is associated with the service of Lieutenant NX76216 Laurence William Male. who was born on 30 April 1912 in Brighton, Victoria. He joined the Second Australian Imperial Force (AIF) on 24 July 1941 in Paddington, Sydney. At the time of joining the AIF he was living in Fairfield, then a semi-rural part of south west Sydney and his next of kin was Eileen Male. He served as a member of the General Base Depot of the 8th Australian Division, and was captured in the Malaya-Singapore campaign. After surviving captivity at the hands of the Imperial Japanese he returned to Australia and served as a member of the Australia Army until 30 April 1959, when, on his 47th birthday he retired with the rank of Captain. Identity discs are an important piece of personal equipment for serving personnel. Often known as 'dog tags' or 'meat tags' they serve the practical purpose of identifying wounded or dead personnel on the battlefield. Information on them can include the wearers nationality, service number, name and initials, religion and blood type. For many Australian prisoners of war in the Second World War their original identity discs were lost, taken or damaged, requiring another set to be made. During the Second World War, the Imperial Japanese used oval identity discs not rectangles as in this instance, so it is interesting to note that this particular identity disc is not a standard issue Imperial Japanese military identity disc.